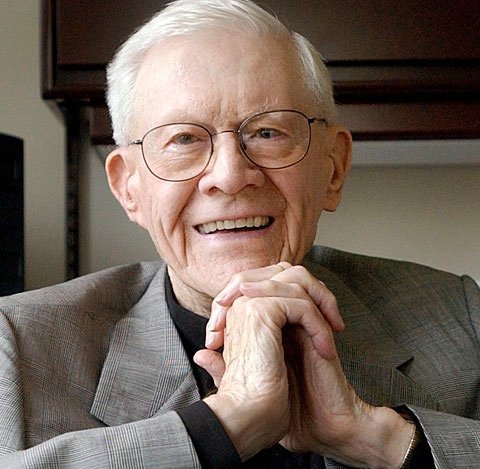 Msgr. William H. Shannon, who achieved iconic status as a professor, chaplain, theologian and author during his nearly 69-year priesthood, died Sunday morning, April 29, at the Sisters of St. Joseph Motherhouse in Pittsford after a lengthy illness. He was 94 years old.

"It’s not only fair, but right, to describe him as a prophet," added longtime friend and colleague Christine Bochen, professor of religious studies at Nazareth College in Pittsford. "A prophet sees clearly what Scripture is calling us to. He took very, very much to heart to see beyond the concerns of institutionalism and formalism, to get at the very heart of what it means to be a Christian — and that is to embrace the Gospel and live the Gospel."

Msgr. Shannon grew up in St. Salome Parish in Irondequoit, attending the parish school as well as St. Andrew’s and St. Bernard’s seminaries in Rochester. He was ordained June 5, 1943, by Bishop James E. Kearney at Sacred Heart Cathedral, and was named a domestic prelate (monsignor) in 1966.

His lone parish assignment was as assistant pastor at Sacred Heart Cathedral from 1943-45. In 1946 he was appointed a professor of religion at Nazareth, thus beginning an association with the college and the adjoining Sisters of St. Joseph Motherhouse that would endure for the rest of his life.

"No one in this diocese has ever taught, or ever will teach, theology to more people than Bill Shannon," stated Father Charles E. Curran, a fellow diocesan priest and scholar.

"He was a well-liked and respected teacher who was never satisfied with just repeating what he had taught before. He incorporated his new understandings and approaches into his teaching," added Father Curran, a professor at Southern Methodist University in Dallas, who was to give the homily at Msgr. Shannon’s funeral Mass.

Father Curran described Msgr. Shannon as an adamant reformer in the spirit of the Second Vatican Council.

"His commitment to the Biblical and liturgical renewals made him an enthusiastic supporter of the Vatican II reforms in the church. The triumphalism and clericalism of the pre-Vatican church was not for him," Father Curran said.

"He led us to, through, and beyond the Second Vatican Council with theological clarity and an almost perfect pastoral sense," added Sister Patricia Schoelles, SSJ, president of St. Bernard’s School of Theology and Ministry in Pittsford.

In the 1970s Msgr. Shannon had developed a strong interest in the writings of Thomas Merton, leading him in the 1980s to become founding president of the International Thomas Merton Society, which promotes greater knowledge of Merton’s life and writings. Msgr. Shannon also wrote and edited numerous books on the renowned Trappist monk, whose influential writings focused on spirituality, social justice and nonviolence.

"Reading Merton began to work on Bill himself. He was not only able to write about Merton, but Merton’s thinking and perspective penetrated into Bill’s own heart as he learned the importance of contemplation, compassion and unity," said Bochen, who with Msgr. Shannon was a founding member of the thriving ITMS.

"As a result of his study of Thomas Merton, he came to a greater appreciation of contemplation and nonviolence, and the connection between the two. All of these developments nourished his own spiritual life, and also what he shared with others in so many different ways," Father Curran added.

She said Msgr. Shannon was deeply loved by both the college community and the Sisters of St. Joseph among whom he had resided at the SSJ Motherhouse since 1946. He took on a more active ministerial role there in retirement, serving as the sisters’ chaplain from 1980 until earlier this year.

"He cared for them in their living and their dying," Father Curran said. "By becoming an associate of the Sisters of St. Joseph, he showed his admiration for and commitment to this congregation."

In his retirement Msgr. Shannon also continued contributing articles to national Catholic magazines while lecturing and attending conferences at venues in the United States, Canada and Great Britain. His book-writing carried on as well with a new book, How to Become a Christian Even if you Already Are One, being released just in recent weeks (copies are on sale in the gift shop at the SSJ Motherhouse.)

Among many honors, an endowed chair in Catholic studies and a lecture series at Nazareth College are named in Msgr. Shannon’s honor. He has received honorary degrees from Nazareth as well as St. Bernard’s Institute (now St. Bernard’s School of Theology and Ministry) and St. Bonaventure University. Father Curran noted that Msgr. Shannon also was a longtime member of the diocesan Priests’ Council and served as spiritual director for many individuals.

" I never once encountered him that I did not come away more knowledgeable, with greater understanding, with a sense of renewed joy and purpose," Sister Schoelles said. "His contributions to me personally and professionally are beyond counting."

Msgr. Shannon will lie in state from noon until 7 p.m. on Thursday, May 3, in Linehan Chapel of Nazareth College’s Golisano Academic Center (the former SSJ Motherhouse), 4245 East Ave., Rochester. Evening prayer will follow in the chapel at 7 p.m.

Bishop Clark is scheduled to preside at the funeral liturgy for Msgr. Shannon at 10:30 a.m. Friday, May 4, also in Nazareth’s Linehan Chapel. Interment will be in the family plot at Holy Sepulchre Cemetery.

Donations may be made to the Sisters of St. Joseph of Rochester, 150 French Road, Rochester, N.Y. 14618-3822, or to the William H. Shannon Chair in Catholic Studies at Nazareth College.