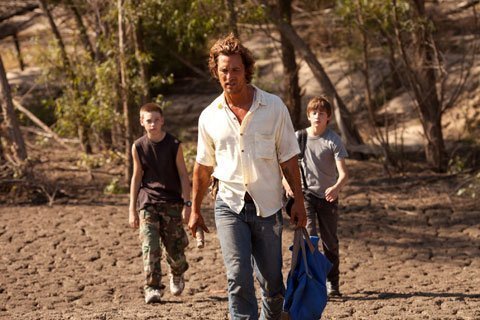 Realistically updating some of the most famous passages of Twain’s iconic story, Nichols’ script uses the template of what is arguably the Great American Novel to explore delicate moral shadings, the nature of friendship and the interplay of innocence and disillusionment in the mind of one of its main characters.

The still-shaping consciousness in question belongs to 14-year-old Ellis (Tye Sheridan). Gentle and idealistic, Ellis is opposites-attract best friends with peppery Neckbone (Jacob Lofland). With no parents on the scene — he’s being raised by his caring but hardly authoritative Uncle Galen (Michael Shannon) — Neckbone is far less cautious than Ellis, but also more cynical.

Together, the two boys like to escape their hardscrabble environment by taking motorboat outings on the river. During one such journey, they discover a man named Mud (Matthew McConaughey) living on an otherwise uninhabited island in the waterway.

It emerges that Mud is a fugitive. Reared nearby, he’s returned to the area on the run from his mysterious, but clearly freighted past.

Drawn by the stranger’s charismatic personality and eccentric ways, the initially frightened Ellis goodheartedly agrees to help him, bringing him food and keeping his presence a secret. Characteristically, Neckbone takes more convincing, but Mud eventually wins him over as well.

As they assist Mud in refitting a disabled boat so he can make a waterborne getaway to the Gulf of Mexico, Ellis and Neckbone are increasingly drawn into — and endangered by — the tangled relationships in their new friend’s life. The most significant of these is his obsessive on-again, off-again romance with comely girl-next-door Juniper (Reese Witherspoon).

According to Mud’s version of events, the pair first fell for each other while they were still children. And it was his love for Juniper — and the need to protect her from harm — that drove Mud to commit the crime that now has both the police and a team of bounty hunters on his trail. He hopes to arrange for Juniper to be with him when he makes his escape.

Disputing Mud’s account of all this is one of his few adult allies, Ellis’ reclusive neighbor Tom Blankenship (Sam Shepard). Though he sympathizes with Mud, and has been something of a father figure to him in the past, Tom warns Ellis not to be swayed by Mud’s charm or too persuaded by his glib discourse.

The complex bond between Mud and Juniper becomes a shifting prism through which Ellis views other relationships in his life.

At home, Ellis is coping with his quarreling parents’ (Sarah Paulson and Ray McKinnon) impending divorce. He’s also grappling with his puppy love for May Pearl (Bonnie Sturdivant), a sometimes disdainful older girl who’s unsure whether, as an exalted high school student, she should lower herself to date a mere ninth grader.

Viewers conversant with scripture will note that the dangerous serpents who call the Mississippi home become a recurring symbol of evil in Nichols’ narrative. The ambiguous mix of light and dark elements in Mud’s personality, for example — an embodiment of the effects of original sin — can be connected to his past interaction with these malign creatures.

The film contains intense but largely bloodless violence, some adolescent sex talk, including references to pornography, a couple of uses of profanity and considerable crude and crass language. The Catholic News Service classification is A-III — adults. The Motion Picture Association of America rating is PG-13 — parents strongly cautioned. Some material may be inappropriate for children under 13.