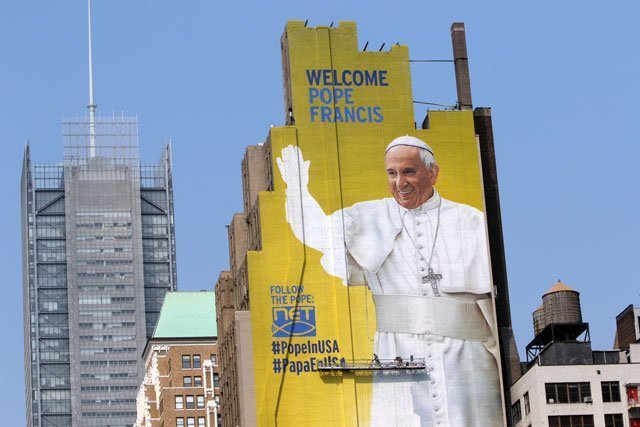 A 225-foot mural featuring an image of Pope Francis nears completion in New York City Sept. 1. The artwork was commissioned by DeSales Media Group, the communications and technology arm of the Diocese of Brooklyn, N.Y.
By Maria Pia Negro Chin
Catholic News Service
NEW YORK (CNS) — New Yorkers and tourists in Midtown Manhattan have been gazing up at a smiling Pope Francis at one of New York’s busiest intersections.
A 225-foot tall hand-painted billboard welcomes the pope, who will be in New York, Sept. 24-26.
The welcoming message is located at the corner of Eighth Avenue and 34th Street, near Madison Square Garden, where the pope will celebrate Mass Sept. 25.
The mural was commissioned by DeSales Media Group, the communications and technology arm of the Diocese of Brooklyn and parent company of The Tablet and NET-TV.
The mural has been attracting the attention of workers and passersby.
"As a tourist, I think it is fantastic. I am Catholic so I am happy to see them doing that mural," Chilean Lorena Quezada told The Tablet, newspaper of the Brooklyn Diocese. "It is impressive … I think the pope is going to like it."
New Yorker Charles Wickliffe said the mural makes people think about religion and God.
"It is nice that (Pope Francis) is coming to Madison Square Garden and that people are putting his picture (on the billboard) instead of putting pictures of cars," he said. "I’m looking forward to hearing what he has to say."
Designed by Israel Ochoa of DeSales Media, the mural showcases a photo of Pope Francis waving to a crowd taken by photographer Giulio Napolitano.
"This is our way to say ‘welcome’ and evangelize in the heart of this culturally-diverse city," said Msgr. Kieran Harrington, chairman of DeSales Media Group. "I am convinced that Pope Francis’ apostolic visit will impact everyone, touching hearts across different backgrounds and beliefs."
The upcoming visit is already making an impression. Adina Settles, who works near Madison Square Garden, recognized Pope Francis’ face when the painters begun to color the mural. She said she hopes his presence inspires people to move beyond politics.
"I’ve lived long enough to see a pope that is connected with the rest of the world," she said. "I think the mural is positive, is uplifting, is hopeful. It’s everything we need right now."
For Rosbel Santana, a Catholic who is lives in Newark, New Jersey, and attends to a Catholic charismatic renewal group, the pope’s visit could be a chance for people to hear his message and "change their lives for the better."
For the four people painting the billboard, working on the likeness of the pope has been a blessing.
Van Hecht-Nielsen, a parishioner of St. John the Evangelist Church in Loveland, Colorado, who has more than 10 years of experience painting billboards across the country, said he was happy to create an ad that has a deeper meaning.
"My wife (Ashlee) and I were very excited. We are both converts to the faith," the father of seven said. "It is wonderful to see the way the pope is touching the world."
"People are getting excited and it is a blessing because I think it sends a message to the community," Hecht-Nielsen said.
Raising awareness about the papal visit might still be needed, according to a survey the Public Religion Research Institute released in August. The survey found that only 47 percent of respondents overall knew the pope was visiting the U.S. However, 69 percent of Catholic respondents had heard the pope is coming.
The mural helped Francisco Alejandro of Columbus, Ohio, to learn about the papal visit. "I would like to learn more about it, so we can visit (New York) again," he said.
The mural includes the public hashtags #PopeInUSA and #PapaEnUSA, inviting people to engage in conversation via social media.
The mural is expected to be seen by 700,000 people each week and will remain in place throughout September.
– – –
Chin writes for The Tablet, newspaper of the Diocese of Brooklyn.
Copyright © 2023 Catholic News Service, Inc. All rights reserved. Linking is encouraged, but republishing or redistributing, including by framing or similar means, without the publisher's prior written permission is prohibited.