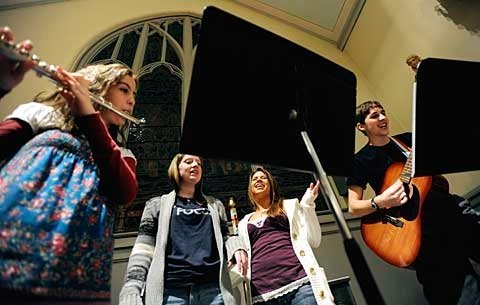 Laura Stewart feels that as a Catholic teenager, she’s at a crucial juncture in her faith journey.

"Kids at this age are now starting to think about, ‘Do I really believe in this kind of religion because I have been trained to believe in it, or because I want to believe in it?’" remarked Laura, 17, a senior at Elmira Notre Dame High School.

As Laura and other teens go through this transitional phase, it’s vital that they have opportunities to take ownership of their faith, according to Deacon Al Pacete.

"I tell them, ‘You are not the leaders of this church tomorrow, you are the leaders now,’" he emphasized.

Deacon Pacete and his wife, Mesina, are employing several approaches to further teen participation at Elmira’s Christ the Redeemer Parish, where he serves as parish deacon and she as youth minister. For instance, under the Pacetes’ leadership a monthly youth Mass was begun in the past year. It’s held every fourth Sunday at 10 a.m. at St. Casimir Church, with teens serving in such roles as lectors, greeters and gift-bearers.

Another key feature of the teen Mass is a youth choir and band with instrumentalists playing drums, guitar, bass, keyboard and flute. Deacon Pacete, a guitarist, said members are largely beginners so he has worked with them closely, "but pretty soon they’ll be able to play on their own."

Laura is a singer in the youth band and her brother Bryan, 14, plays the drums. Laura recalled that she became so attracted to the group’s music during Mass that "I was singing along with them before we were even asked to join."

Deacon Pacete draws on the influence of such well-known Christian artists as Matt Maher, Chris Tomlin, Third Day, Matt Redman and Tim Hughes for an energetic style that he said "speaks to young people." He noted that youth attendance is strong at these monthly liturgies, with the positive effects spilling over into the rest of the congregation as well.

"It so happens that the older people are liking it," said Deacon Pacete, who was ordained a permanent deacon in the Diocese of Rochester in 2008. He added that he uses praise and worship music to a similarly positive effect with inmates at Elmira Correctional Facility, a maximum-security prison where he is full-time chaplain.

Practice for the teen music group is every Friday night at 6 p.m. at St. Casimir, and new members are always welcome. However, Deacon Pacete emphasized that music is not the only type of activity available to Christ the Redeemer youths. For instance, EXULT gatherings take place the last Friday of each month at 7 p.m. at St. Casimir. These meetings involve a variety of guest speakers on topics pertinent to teen life.

Deacon Pacete further noted that this past July, 10 area teens attended a youth conference at Franciscan University of Steubenville, Ohio, "and we just had a great result." One example was Laura, who called herself "an average Catholic" before the Steubenville event but through the experience "my life was turned upside down and my eyes were opened to a new world."

Although Christ the Redeemer’s youth ministry exists mainly for its three churches — St. Casimir, St. Charles Borromeo and Our Lady of Lourdes — it is open to all (contact Deacon or Mesina Pacete at 607-734-2401 for details on upcoming events.) In fact, Deacon Pacete said one goal is to have the monthly youth Mass become a weekly event for the entire Chemung County region, not unlike the 5 p.m. regional Mass currently taking place each Sunday at Elmira’s St. Patrick Church.

Deacon Pacete said one key to ministering with teens is giving them the freedom to express themselves. Laura accords the Pacetes high marks in this area, adding that the couple’s high energy level "is contagious in an amazing way" and that their efforts toward youth ministry "make it fun but also meaningful."

"I am so happy that these opportunities exist for us. I think it is important to have these kind of offerings in our parish because it opens up a door," Laura said.

Deacon Pacete said there’s a long way to go, but that he and his wife are committed to influencing as many teens as possible to deepen their faith, lest they slip away from church involvement after confirmation.

"I’m all for bringing Christ closer to them, and them closer to Christ," he said. "They are starting to see something they haven’t had before. It’s new and exciting and it will be nurtured and nourished, and grow."