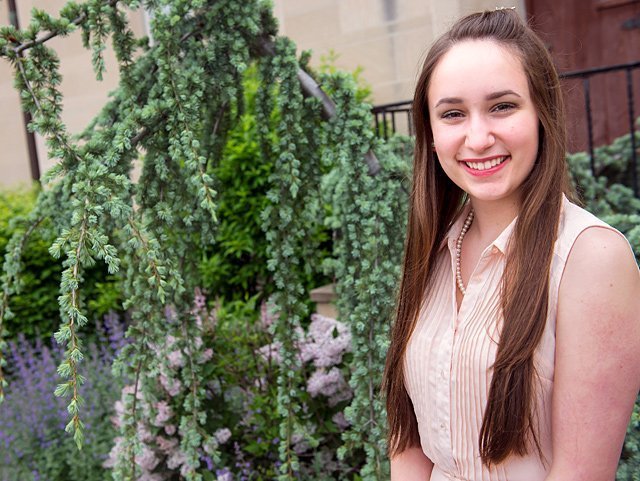 Madelyn Houck was just in fourth grade when she cantored at her church for the first time, and she’s been leading her fellow parishioners in song ever since.

Clare DeMarco, meanwhile, leads the singing at her own church at least once a month and is scheduled to sing at several weddings there this summer. And Sarah Parshall has cantored at her own church for several years and currently is working to develop and implement a music program at another church in her parish.

Madelyn, Clare and Sarah are just three of the 23 high-school students who received the Diocese of Rochester’s Music Ministry Recognition Award during a Lessons and Carols service at Sacred Heart Cathedral in Rochester on April 30. All of these teens, who were nominated by their parishes’ pastoral leaders or music directors, are active in music ministry at their parishes, but each teen’s story is unique.

Six years ago Madelyn, now 16, teamed up with an adult cantor to lead the singing at St. Francis Solanus Church in Interlaken.

“She’d kind of coach me through. She’d sing some of the stuff with me,” Madelyn recalled. “I was a little bit nervous to make a mistake, but I just love singing.”

When she was in sixth grade, Madelyn began cantoring on her own at St. Francis Solanus, which in 2016 merged with two neighboring parishes to form Mary, Mother of Mercy Parish. Madelyn has continued to cantor not only because she loves singing, but also because music ministry provides her with a way to live out her Catholic faith.

Madelyn sings with other young people several times a year during the parish’s Children’s Masses and sometimes leads her peers during these liturgies, noted Sandra Huhn, music director at St. Francis Solanus.

“She has a beautiful high soprano voice and sight reads music like a professional,” Huhn wrote in her letter nominating Madelyn for the diocesan recognition. “She projects her voice to the back pews and has excellent diction. She is currently one of seven cantors who rotate Sundays.”

Likewise, Clare is one of a handful of cantors regularly scheduled to sing at her own parish, St. Benedict in Canandaigua and East Bloomfield. Clare, now 15, started playing the piano when she was 4 and joined her first choir when she was 11. Her family lived in Fairport but visited St. Mary Church in Canandaigua — one of St. Benedict’s two worship sites — regularly during the summer months, and two years ago Clare expressed an interest in singing in church. Trixie Meteyer, the parish’s music director, invited her to co-cantor at one Mass alongside experienced cantor Dawn Burdick, St. Benedict’s pastoral associate.

“Clare was nervous at first, of course, but the minute we heard her sing we knew we wanted to encourage her,” Meteyer recalled.

The first few times she cantored were nerve-wracking, Clare agreed, but the teen said the experience improved exponentially as she became more comfortable in front of the congregation.

“Over the course of time I’ve been able to kind of pay attention to the words and what they mean and kind of sing it more as a prayer, which I wasn’t able to do in the beginning because I was so nervous and focused on not making mistakes. It feels really good now,” explained Clare, whose family has since moved to Canandaigua.

Cantoring feels good to Sarah, too, but that wasn’t always the case. Sarah, now 17, has been singing for as long as she can remember, and three years ago she decided she wanted to become a cantor at her church, St. Januarius, which is located in Naples and is part of Our Lady of the Lakes Parish.

“I had no idea what to do at first. I even had to practice the songs I had been singing for a long time as part of the congregation, because it’s different to lead than participate,” Sarah said.

Leading the congregation in song also is very different from performing in concert, she said.

“Cantoring at Mass is about helping people feel the presence of God through music. It’s not about you. If you have taken your eyes completely off yourself and put them on God, that is true cantoring,” Sarah said.

Cantoring, she added, also has allowed Sarah to be more mindful of what is taking place during Mass and to be more involved in her parish community. And Sarah’s active role in the Mass, in turn, inspires the rest of the congregation, noted Katie Robinson, music director at St. Januarius.

“It’s encouraging to see youth sharing their time and talent so generously. It definitely encourages others in their faith,” Robinson said.

Burdick agreed, noting that every time she co-cantors with a young singer, a handful of people will engage in conversation with the cantors after Mass.

“It gives them so much hope to see young people involved in the church,” Burdick said. “Seeing young people use their gifts as part of our liturgical celebrations reminds the community that there is life here, and that we have much to celebrate.”