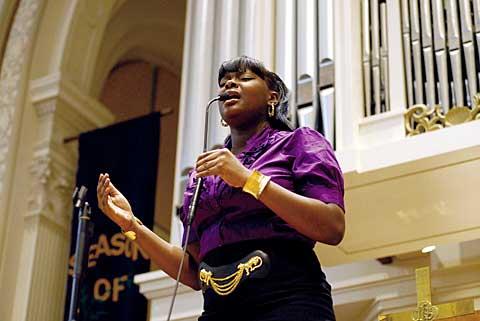 Soloist Jazmain Neely performs an excerpt from "Where Are You, Lord? A Grandmother's Prayer" at Rochester's Downtown Presbyterian Church March 28. The musical, written and directed by Robert Ricks, will be performed May 1 at the Main Street Armory.

ROCHESTER — The drug dealer yells at a young teenager to stay away from his corner – not out of malice but to stop him from going down the road he has traveled.

David Williams of Rochester portrays the drug dealer, called Misery, in the play "O Where Are You Lord: A Grandmother’s Prayer," written and directed by Robert Ricks. During a rehearsal at East High School on March 15, Ricks played the teenager role and sought to bring out more emotion in Williams’ performance. The gospel-style musical about a modern day Job will be presented by Rick’s production company on May 1.

Williams, who also is a Christian rapper going by the name D-Will, said he lived the life of his character before accepting God’s role in his future. After getting kicked out of several high schools, he began selling marijuana just a few years ago at a corner off Rochester’s East Avenue.

"The role I got, it’s really the old me," said Williams, who now is a youth pastor for a congregation on Lyell Avenue. In the past, he had refused his mother’s requests to go to church. "I’d say, ‘You go to church.’ I don’t need God."

He moved to Miami and returned in 2006. Finally relenting to his mother’s pleas, Williams went to church one day and "cried like a baby," he said. Williams added that the drug-dealer role in Ricks’ play was meant for him because he never planned to audition but did it on the advice of a mentor.

"The whole script is good news," he remarked. "Souls can be reached."

Through the story of Grandma Claudie, the play tackles such real-life issues as alcoholism, drug addiction, youth violence, absentee parents, and grandparents raising their grandchildren. She is the modern Job as she struggles to raise her daughter’s two children while their mother goes through drug rehabilitation. Grandma’s faith in God, who also is a character in the play, is never shaken by the trials and tribulations thrown at her.

"She goes through all these things, but she remains faithful," said Ricks. "It’s a really powerful production."

Ricks is right on point on so many levels, said Jerry Capers, who saw the show in Buffalo last winter and said it made the hairs on his neck stand up. Part of its impact is its massive production, featuring 21 characters, a five-piece band, three spiritual demons and a $7,000 set, noted Ricks.

"Drug addiction, broken homes, (bad) relationships … it’s all connected," Capers remarked. He said he joined the production as co-director because he believes it can make a difference in the community. "The hope is families will talk of the issues raised and which they face," he added.

A former cocaine addict who has been clean for the past 17 years, Ricks said he has written five plays, two books and developed a youth poetry project. Ricks said these accomplishments might not have happened without the help he received from the recovery program run by David Wedow, who is also an organist at Our Lady of the Americas Parish. A portion of the play’s proceeds will be donated to 289 Recovery, the drug and alcohol rehabilitation program, which is housed at 289 Monroe Ave.

"The program was instrumental in the person I am today," said Ricks.

He said he based his play on the Old Testament story of Job because — while the issues are different — the struggles and the results are the same for those who lose their faith and thus lose their way: "Youth violence, overtaxed grandparents, parents out partying … and men growing up fatherless. "

Ricks has partnered with several churches, including Our Lady of the Americas, to help promote the play’s message of faithfulness and salvation. Wedow said he hopes Ricks’ musical will inspire more churches to tithe to the recovery program as a few city churches have done in the past. With the current economic challenges for churches and community organizations, Wedow said he hopes the entire community realizes that people who come to his program have nothing or are on the verge of losing everything they do have.

"If more churches would help, it would be a beautiful thing," he said.

Wedow said his mission is to offer the message Ricks received to other individuals seeking to turn their lives around through his recovery program, which is open to all. The program has helped thousands of people over the years not only with rehabilitation but also by providing clothing and furniture as needed, said Wedow, who became director of the all-volunteer, non-program organization in 1989.

"Our focus is to become a beacon of light and hope," said Wedow, who turned his own life around 22 years ago. "This is my way of giving back to the community."

EDITOR’S NOTE: Down in the Dirt Productions & Publications will present "O Where Are You Lord: A Grandmother’s Prayer" at 2 p.m. and 7 p.m. May 1 at the Main Street Armory at 900 E. Main Street. Tickets are $20, $15 and $10 for students and can be obtained at Our Lady of the Americas, 864 E. Main St. For more information, e-mail downinthedirtpp@yahoo.com.