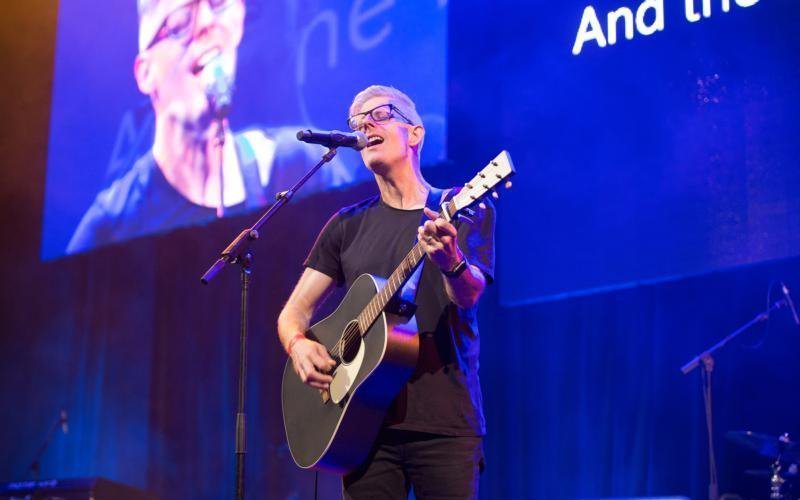 SYDNEY (CNS) — U.S. Catholic musician Matt Maher has advice for young people: Waste more time at the feet of Jesus, and the rest of your life should go according to God’s plan.

Time is precious, he said Dec. 7, and young people have more time at their disposal than others.

“We all have the same amount of time as Bill Gates. He has infinitely more financial resources — but he cannot buy himself more time,” Maher said Dec. 7 at a news conference after the opening of the Australian Catholic Youth Festival.

“As a young person, if I could go back, I would try to encourage myself to waste more time at the feet of Jesus. As a songwriter and a worship leader, so many of my early songs came out of wasting time, from the world’s perspective — spending time in front of the Blessed Sacrament or spending time leading worship events with kids or being at a Bible study at the parish I worked at on Monday nights with 20 kids.”

Maher, one of the biggest fixtures on the religious music charts around the world, performed at several sessions of the Australian Catholic Youth Festival in Sydney Dec. 7-9. The festival is a biennial event instituted by the Catholic Church in Australia following World Youth Day in Sydney in 2008 to give relatively isolated Australian Catholic youth a focus for their faith between World Youth Days, which usually are held on the other side of the world.

He also told journalists that young Catholics should not stop at admiring their role models but should go beyond them and keep their gaze fixed on Christ, developing an interior life and entering more deeply into the school of prayer.

“I’m not a Christian expert,” he said. “I’m just another broken sinner, and God gave me the ability to voice my concerns and my needs through music, and other people can identify with it.

“I guess that’s ultimately how you keep balance. You remember, at the end of the day, my music is just who I am. It comes out of my vocation as a husband and a father. It’s a reflection, hopefully, of having an interior life, praying and pursuing Jesus. And I try to just be as transparent with that as I can.”

An infectious, joy-filled faith will help the young answer the deepest issues of their lives; overwhelmingly they want the answers to questions such as “Who am I?’ and “What’s my place in the world?” he said.

“I think at the end of the day … all it takes is a few people exhibiting the joy of Jesus. And I think that kind of joy is infectious. It gives you permission to ask the question: Do I have that in my life? Is that evident in any facet of my life? And if it’s not … then maybe it should be,” he said.

Asked how he handles the fame he has won, Maher said almost no one in his Newfoundland hometown knows what he does. In Nashville, where he now lives, he also enjoys a fair amount of anonymity.

“People always ask what inspires you to write a song like ‘Lord I Need You’ and I’m like, ‘Well, it’s just true’ and it’s easy to sing because it’s honest.”

He said he believes the church needs to rediscover a more powerful and joy-filled proclamation of the good news in its evangelization efforts.

“I think events like (ACYF) are visual proof that the church needs to rediscover a kerygmatic approach to evangelization. Ultimately, evangelization can’t be taught in a classroom, because it’s not an academic endeavor — it’s a human endeavor.”

Maher also rejected the idea that there is such a thing as one Catholic culture.

“There isn’t a Catholic culture, per se, because the mission of the church is to baptize culture,” he told reporters. “Its (role is) to look at the things that are good, true and beautiful and affirm them.”

He recalled the unexpectedly powerful experience of recently hearing a Maori hymn to Mary in New Zealand.

“I’d never heard ‘Mo Maria’ before. And we walk into this little chapel in a Catholic school and they’re singing this as an opening, and I was just in tears. (We learned) how, as part of their culture, they sing in harmony, and that’s part of the Maori way of things and how that’s now incorporated into the faith.

“I think there’s a lot the American church can and should be learning from the church around the world. I do think in the West one of the things that we struggle with is that we fail to see and recognize how the church is growing globally, and we are part of a global community, and I think it enriches our faith when we do that,” he said.