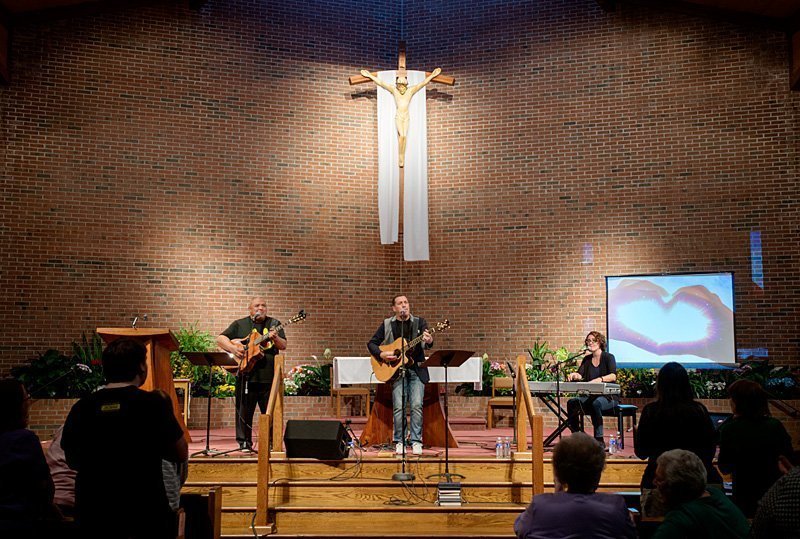 Jesse Manibusan (from left,) Steve Angrisano and Sarah Hart perform together during the Story and Song concert at St. Lawrence Church May 1.

GREECE — Put three dynamic solo musicians together, and the energy level is bound to multiply as well.

There was energy to spare on the evening of May 1 inside St. Lawrence Church, as a crowd of approximately 400 enjoyed the triple force of Steve Angrisano, Sarah Hart and Jesse Manibusan, who filled the air with laughter, prayer and quality music. The three nationally renowned contemporary Catholic recording artists appeared at the Greece parish as part of their Story & Song Tour.

Enthusiastic audience participation was a staple throughout the night. Hart set the tone only a few minutes into the show by leading a sing-along to the popular classic "You Are My Sunshine," instructing attendees to serenade each other and even exchange hugs by the time they sang the final chorus.

Later in the concert Manibusan, Hart and Angrisano encouraged females young and old to stand up on cue and sing "He’s the best," with males standing in reply and spelling out "J-E-S-U-S" as the musicians encouraged a competition to see which group was louder.

Along with these lighthearted moments, there was an abundance of captivating music as one might expect based on the headliners’ credentials. Although they’re all successful solo artists in their own right, they performed together seamlessly, sharing their original songs and trading lead vocals, with Angrisano and Manibusan on guitar and Hart handling keyboard duties.

Angrisano, a Dallas, Texas, resident, is a veteran musician, composer and youth minister who has been featured at numerous World Youth Days, National Catholic Youth Conferences and diocesan youth conventions/conferences. Manibusan, a renowned singer, songwriter and inspirational speaker, is from northern California; both he and Angrisano have appeared previously in the Diocese of Rochester. Hart is a singer and songwriter from Nashville who in 2011 was nominated for a Grammy Award for "Better Than a Hallelujah," a song she cowrote that was recorded by Amy Grant.

Hart also had the honor of performing for Pope Francis in October 2013 at St. Peter’s Square in Rome. She told the St. Lawrence concertgoers how she got to meet the pontiff afterward; whereas everybody else in line kissed his ring or shook his hand, she said she spontaneously gave him a big hug, joking that the security guards gasped and she smeared mascara on the pope’s vestments due to her tears.

"He just had this sweet face, this lovely face of welcome," she recalled. "In his eyes, in his face, in his love, I felt our church."

Hart’s anecdote typified the way that she, Angrisano and Manibusan slid effortlessly between song, humorous banter and storytelling. Woven into their performances were messages encouraging those in attendance to go out and live their Catholic faith proudly, being inclusive and compassionate in the process.

"We live in a world that is desperate to know that there is hope, there is faith, there is truth and that God is here," Angrisano emphasized to begin the evening’s lone encore, "Give Us Your Peace."

Angrisano, Manibusan and Hart performed for two hours and earned a standing ovation at the end. The featured artists were preceded by the Diocesan Multigenerational Family Choir, which performed several songs to get the evening started.

The Friday-night concert kicked off a busy weekend of diocesan activities with St. Lawrence serving as the base. Also included in the festivities were the annual Run for the Young 5K road race and one-mile Fun Walk, held the following morning, that began and ended in front of the church. This annual event, first held in 1997, raises funds from entry fees, pledges collected by runners and business sponsors that go toward providing financial aid for Catholic teens to attend diocesan and national conventions and other events during the year.

Then, on the afternoon of May 2, Angrisano, Hart and Manibusan hosted a Story & Song workshop at St. Lawrence for parish staff and volunteers, offering tips on how to evangelize, connect with others, foster an engaging environment for youths at church and home, and keep the fire alive after peak faith moments.