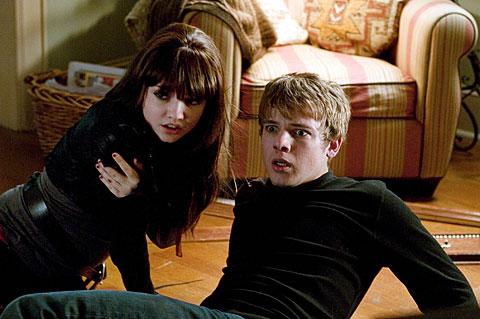 NEW YORK (CNS) — Wes Craven, the horror auteur best known for unleashing Freddy Krueger in 1984’s "A Nightmare on Elm Street," is back at it with another, much less memorable bogeyman. There’s little chance the slasher behind the mayhem in "My Soul to Take 3-D" (Universal) will enter the horror movie pantheon, let alone secure a place in pop culture lore.

Taking an 18th-century children’s prayer as his jumping-off point, writer-director Craven offers a cheaply effective diversion. Unlike others working in the genre today, he doesn’t rely on stomach-churning gore or sadistic torture to frighten audiences; he knows how to make viewers jump the old-fashioned way. That’s probably the best that can be said about this picture, however, since there’s enough bloody violence and other unsavory material to render it inappropriate.

In the hamlet of Riverton, Mass., someone begins stalking seven teenagers who were born the night a serial killer known as the Riverton Ripper supposedly died. Everyone in town is obsessed with this homegrown criminal, a husband and father named Abel Plenkov (Raul Esparza), who suffered from multiple personality disorder and even murdered his pregnant wife.

The day after a ritual bonfire commemorating Plenkov’s spree, the targeted youths spend tense hours at school on their 16th birthdays. Is the Ripper still alive or did he find a way to endure inside someone else — by possessing their soul, perhaps? The most likely vessel is a tremulous kid nicknamed Bug (Max Thieriot) whose best friend, Alex (John Magaro), also came into the world on that fateful night. The two are bullied by the cool clique, which happens to include two peers — the "jock" and the "pretty girl" — who share their birthday.

No matter how much Craven tries to ornament the action with talk of soul-eating and bad seeds versus good seeds, it boils down to people confined to a house trying to avoid being butchered. He goes out of his way to mock religious faith, in particular any ability it may have to shield believers from harm. Penelope (Zena Grey), one of the seven marked teens, is a fanatical Christian who believes in the power of prayer. Needless to say, her 16th birthday is her last.

"My Soul to Take" isn’t boring, but it’s far from original or, pardon the bad pun, cutting-edge. There is absolutely no justification for exhibiting it in 3-D and asking moviegoers to spend extra for virtually nonexistent visual effects.

Craven knows how to craft suspense and spook audiences using low-tech means. That doesn’t mean he should or that anyone need take notice of the instantly disposable result.

The film contains numerous acts of bloody violence, including a suicide and multiple stabbings and slashings; pervasive rough language and profanity; disrespectful attitudes toward religion and prayer; and a number of sexual references and banter involving teenagers. The Catholic News Service classification is O – morally offensive. The Motion Picture Association of America rating is R — restricted. Under 17 requires accompanying parent or adult guardian.