My Week With Marilyn - Catholic Courier 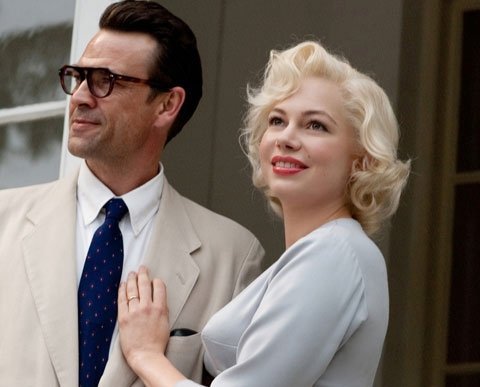 NEW YORK (CNS) — Nearly 50 years after her 1962 death, Marilyn Monroe continues to fascinate, with every detail of her often troubled life and loves endlessly dissected and analyzed. The latest treatment is “My Week With Marilyn” (Weinstein), a behind-the-scenes story of the making of one of Monroe’s least successful films, “The Prince and the Showgirl” (1956).
¬†
Based on the 1995 memoir by Colin Clark, “My Week With Marilyn” presents the true story of the author’s unexpected friendship with the actress during the film’s production in London. What emerges is a sympathetic portrayal of a tortured, complicated soul, a woman who wanted only to be loved but, in the end, needed love too much.
¬†
“Everyone remembers their first job. This is the story of mine,” says Colin (Eddie Redmayne) as the film opens. And what a job! Eager to escape his privileged British upbringing and break into movies, the 23-year-old looks up a couple of family friends who happen to be acting royalty: husband and wife, Laurence Olivier (Kenneth Branagh) and Vivien Leigh (Julia Ormond).
¬†
Colin lands a job as a gofer on Olivier’s directorial debut, which pairs the distinguished actor with Monroe (Michelle Williams), the biggest movie star in the world.
¬†
Each partner in this unlikely collaboration has an ulterior motive. Olivier, middle-aged and past his acting prime, is eager for a comeback — and perhaps an affair with his voluptuous co-star. Thirty-year-old Marilyn seeks prestige from Olivier and desperately wants to be taken seriously as an actress. At her side is her method acting coach, Paula Strasberg (Zoe Wanamaker), who needles Marilyn to “feel” the role and “become” the character.
¬†
What ensues is a clash of titans — and cultures — as the set becomes a battleground. It’s staid Brit versus free-spirited Yank, old guard versus young gun, tradition versus wild abandon.
¬†
Olivier, a strict disciplinarian, is driven to despair as Marilyn, dependent on pills and alcohol, withdraws. “Trying to teach Marilyn Monroe how to act is like trying to teach Urdu to a badger,” he moans.
¬†
Salvation comes in the form of the innocent but smitten Colin, who longs to protect the star from the sniping establishment.
¬†
“You should get out more. See the sights,” he tells her.
¬†
“I am the sights,” Marilyn responds.
¬†
Nonetheless, with her third husband, Arthur Miller (Dougray Scott), out of town, Marilyn whisks Colin away for week in the country. In him she finds a kindred spirit, not a lover, and she musters the energy to stand up to Olivier and complete the picture.
¬†
As the insecure yet headstrong starlet, Williams turns in a bravura performance that goes beyond mere impersonation to something more genuine. She portrays Marilyn as a victim, surrounded by hangers-on who ply her with drugs, and a husband who scribbles cruel notes about her behind her back. Yet, in the end, she manages to take control and have the last laugh.
¬†
Directed by newcomer Simon Curtis, “My Week With Marilyn” is surprisingly chaste and free of exploitative intent, a handful of stolen (admittedly adulterous) kisses and two glimpses of Monroe’s backside notwithstanding. This is primarily Colin’s story, the tale of a decent man more interested in protecting the underdog (“She needs a chum,” he tells Olivier) than bedding or victimizing her.
¬†
The film contains fleeting rear female nudity, brief adulterous kissing, a few profane expressions and some rough language. The Catholic News Service classification is A-III — adults. The Motion Picture Association of America rating is R — restricted. Under 17 requires accompanying parent or adult guardian.
¬†
– – –
¬†
McAleer is a guest reviewer for Catholic News Service.