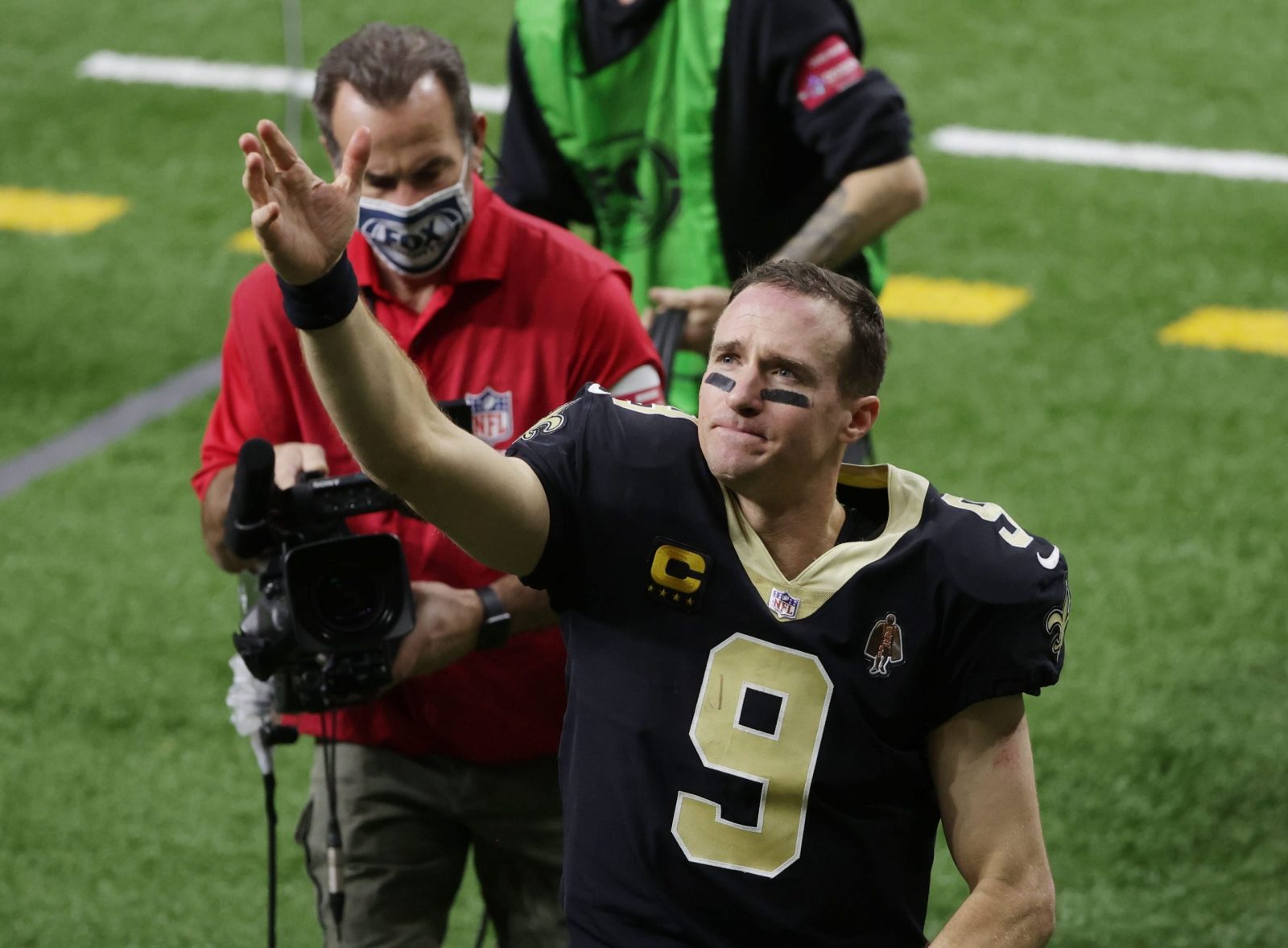 New Orleans Saints quarterback Drew Brees waves to the crowd at Mercedes-Benz Superdome in New Orleans Jan. 17, 2021, as he walks off the field after a NFC Divisional Round playoff game against the Tampa Bay Buccaneers. (CNS photo by Derick E. Hingle/USA TODAY Sports via Reuters)

NEW ORLEANS (CNS) — Joe Delery is a lifelong Catholic and has spent a career with the New Orleans Police Department using his 6-foot-3 frame to protect and serve with the best of them, intuitively knowing how to defuse a tense standoff with a disarming gift of gab.

When he was a lanky freshman at De La Salle High School in 1972, he went out for the Cavaliers’ JV football team, in part because of a backhanded comment he had received from a teacher at Christian Brothers School, Don Rowan, an old football coach from New Iberia, Louisiana.

“He was one of my greatest teachers, but he made a comment one day like, ‘Delery, you could never play football.’ And so when I graduated from Christian Brothers and got to De La Salle, I was like, ‘I’m going out for the football team. I’m going to prove Don Rowan wrong,'” Delery recalled.

And? “Don was right,” he laughed. “My heart definitely was not into the game. It was more into hunting and fishing.”

Still, years later, Delery made a connection to football — in perhaps the most unlikely of places: St. Rita Church in New Orleans.

For many years, he has attended the daily 7 a.m. Mass there, usually arriving just after it is opened for prayer. It’s his quiet time.

“I get there typically about a half-hour before Mass and watch everybody come in, and also to tell everybody, ‘Good morning,'” he told the Clarion Herald, New Orleans’ archdiocesan newspaper. “I’ve kind of thought that that was my job, my ministry, like the schoolteacher opening up the school for the kids. … It’s also my way of actually starting my day on a really great high note.”

Imagine Delery’s surprise several years ago when he saw a young adult — probably in his early 30s, he guessed, according to his NOPD-honed observation powers — dressed casually in shorts and sneakers, coming into the church just about every morning. The man always arrived around 6:30 a.m., walked through the front door and took his seat in the back pew, just to the right of the main aisle, and usually left about five minutes before the 7 a.m. Mass started.

Delery opened the door for the man one day and did a double take as he was leaving.

“I’ll be honest, I didn’t realize who he was when I saw him the first time, because I had only seen him in football gear, and this was a little guy,” Delery said. “But what gave him away was the birthmark on his face.”

“Every day, he would come in very unassuming, very quietly, and kneel all the way in the back on the right side, in the same spot,” Delery said. “You could tell he was extremely focused, extremely intense, from the standpoint of having his mind set on what he was going to do, and he wasn’t going to let anything get in the way of that.”

“It was his time with God. He was spending time with God in prayer, and then when he finished, he would walk out and just go his way.”

One day as Brees left the church, the cop in him couldn’t resist. “Drew, can I ask you a question? Are you Catholic?”

“I was going to get you for the Knights of Columbus. We’d have the best council ever!”

Brees looked at Delery and gave him “a crooked grin.”

Parishioners began to learn Brees was a St. Rita regular, but they were careful to respect his privacy and his prayer time.

“People were excited about seeing him, but they left him alone,” Delery said. “One man who is the biggest Saints fan in the world wanted to go over and say something, but he said, ‘No, he’s praying. I’m going to leave him alone.'”

With Brees contemplating retirement after 20 NFL seasons, Delery doesn’t know if the quarterback’s St. Rita prayer sessions have ended, but he will remain forever impressed.

“There’s something more to him than just football,” Delery said. “We all believe that we’re kind of the masters of our own destiny, that we don’t owe anything to anybody, including the higher power. To see this guy — who I can’t tell you how much money he makes — come in and have that quiet time before practice was very inspirational. He did it not for any fanfare. Nobody knew he was doing it. It wasn’t broadcast. He wasn’t doing it to be seen, that’s for sure.”

Delery has an idea that hasn’t yet been sanctioned by the pastoral council.

“I’ve got a brass plaque that I have to have put on that back pew: ‘Drew Brees used to kneel here,'” Delery said.

Well, Brees did perform a few miracles in New Orleans, and some would consider the back pew a third-class relic.

“I guess the best way to describe it would be when Jonas Salk found the cure for polio, that’s the way I’m going to look at Drew Brees,” Delery said. “Because when we needed something to elevate us after Katrina, he came in and got us to the Super Bowl. That was like the greatest shot in the arm for this city and for the people.”

“What Drew did for the city of New Orleans,” said Delery, “was like Andrew Jackson coming down and helping us win the war.”