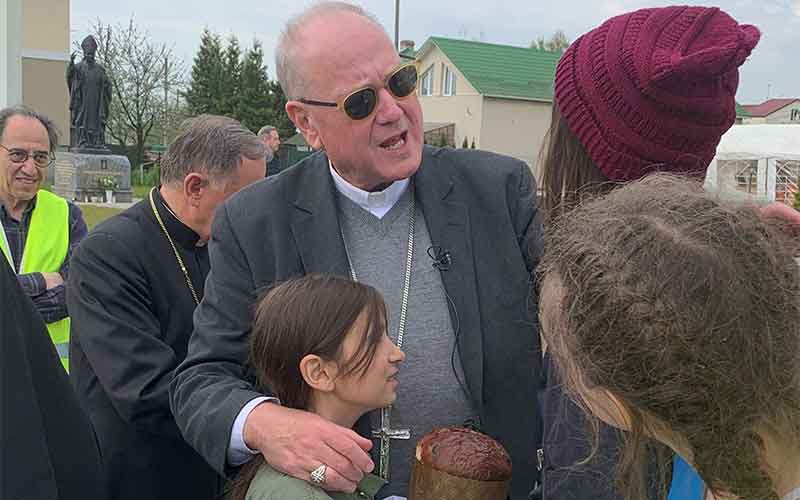 New York Cardinal Timothy M. Dolan, chairman of the Catholic Near East Welfare Association, embraces a girl who greeted him with bread and salt, a traditional way to greet and honor guests in Slavic cultures, during a visit to Lviv, Ukraine, May 2, 2022. (CNS photo by Michael la Civita/courtesy CNEWA)

NEW YORK (CNS) — New York Cardinal Timothy M. Dolan said he was surprised and inspired by Ukrainians he met when he made a brief visit to Lviv, Ukraine.

“I thought I would come to Ukraine and see great depression,” he told the Religious Information Service of Ukraine. “Yes, I see sadness and pain, but I am impressed by the vitality, hope and solidarity of Ukrainians.”

On May 2, the cardinal and Archbishop Mieczyslaw Mokrzycki, Latin-rite archbishop of Lviv, met with the leadership of the Ukrainian Catholic University, families of displaced Ukrainians who found refuge during the war and student volunteers. The visit was part of a trip by a New York church delegation to visit and express solidarity with Ukrainian refugees, including those in the bordering countries of Poland and Slovakia.

The cardinal told RISU he would pass on Ukrainians’ messages of gratitude for all the help they received from Americans.

Nearly 12 million Ukrainians have fled their own country or been displaced from their homes in Ukraine since the Russian military invasion of their homeland began Feb. 24, according to the United Nations.

In Ukraine May 2, the day before the New York delegation returned home, Cardinal Dolan said, “We didn’t know for sure if we’d be able to get here. But thanks be to God, we were able to leave Poland yesterday and come to Ukraine.”

The cardinal delivered that message in a short video posted to Twitter and other social media channels, as he did for the length of his trip to Eastern Europe, which began April 29. He stressed the cooperation among organizations such as the Knights of Columbus and Caritas Internationalis at a staging area on a seminary campus in Lviv where, he said, water, clothing and medicines are gathered for transport to those in need in other parts of Ukraine.

Directly addressing those back home, the cardinal said: “One of the reasons we came is to thank you for your generosity, and now you see where it’s going. So keep it up, we need it.”

The cardinal, who is chairman of Catholic Near East Welfare Association, led a delegation that included Auxiliary Bishop John S. Bonnici, a board member of Aid to the Church in Need; Msgr. Peter I. Vaccari, president of CNEWA; and Msgr. Kevin Sullivan, executive director of the New York archdiocesan Catholic Charities. Others traveling with the group included Michael La Civita, CNEWA’s communications director, and Joseph Zwilling, communications director for the archdiocese.

“If you really want to see the church, come here to Krakow,” Cardinal Dolan tweeted April 30. “And you’ll see hundreds and hundreds … of agonizing Ukrainian refugees who are being embraced and loved and welcome and fed and healed and housed and sheltered and schooled by the people here.”

The people to whom he was referring include those from parishes of the Archdiocese of Krakow who distribute food as refugees arrive on trains. “The Knights of Malta, Catholic Near East Welfare Association, Caritas International, the Knights of Columbus, Aid to the Church in need — you name it, they’re here. And this is the church. This is where the church is, right now.”

In a May 2 email to Catholic New York, the archdiocesan newspaper, Bishop Bonnici said the delegation encountered many ordinary people answering the call to assist Ukrainian refugees.

“A young man named Oscar told me that he made his way to the train station at the Polish-Ukrainian border immediately after the arrival of the first trainloads of refugees,” the bishop said. “Over 15,000 … made their way through the station every day. Oscar did whatever he could to be of assistance. From moving supplies to serving food to cleaning rooms — he did it all. He has been there every day from the start.”

When the bishop asked Oscar why he continued to return every day to help, Oscar said, “I just want to do something good for these people when so many bad things are happening in their life.”

Bishop Bonnici said, “Almost everyone we met strongly believes that Christian love is the answer to evil in our world.”

The bishop said the visit “has allowed me to better appreciate the real story of the Ukraine war, its impact on regular people, collateral damage and the beautiful ability of the people to come together in a time of need.”

“Personally, watching the church in action has been inspiring. Seeing firsthand how the generous donations of so many good people is truly helping men, women and children in a desperate time has reinforced my belief in the good of persons seeking to love their God and neighbor as Christ taught,” he said.

Msgr. Sullivan, in an email interview, told Catholic New York that he was heartened by the “nonbureaucratic response” delivered by the dedicated staff and generous volunteers of Caritas Internationalis, which “created a family-like welcome experience for refugees fleeing devastating conditions in their country.”

“Mothers and children met warm and caring individuals who welcomed them into their new neighborhoods and communities, as they dealt with the chaos and uncertainty of the Russian invasion.”

One poignant memory of the trip, Msgr. Sullivan said, was his encounter with a young law student named Kate at a welcome center in Lviv. She had been forced to flee when Russian troops occupied her home.

“She had no choice but to leave,” Msgr. Sullivan said. “Despite the suffering and disruption, Kate’s spirit was far from broken. She was helping other refugees at the center and was planning on returning home as soon as conditions permitted. She was an incredible witness to resiliency and determination in the human spirit.”

In a statement emailed to Catholic New York, Msgr. Vaccari said the delegation members were “witnesses of hope.”

“One element of that was seeing how the church has responded to this devastating tragedy, coming together as global agencies — such as CNEWA and the Knights of Columbus — with local partners, diocesan charities and parish volunteers. That solidarity, that togetherness, has really impressed me.”

Contributing to this story were John Woods and Christie L. Chicoine in New York.

Tags: NY Catholics, War in Ukraine
Copyright © 2022 Catholic News Service, Inc. All rights reserved. Linking is encouraged, but republishing or redistributing, including by framing or similar means, without the publisher's prior written permission is prohibited.