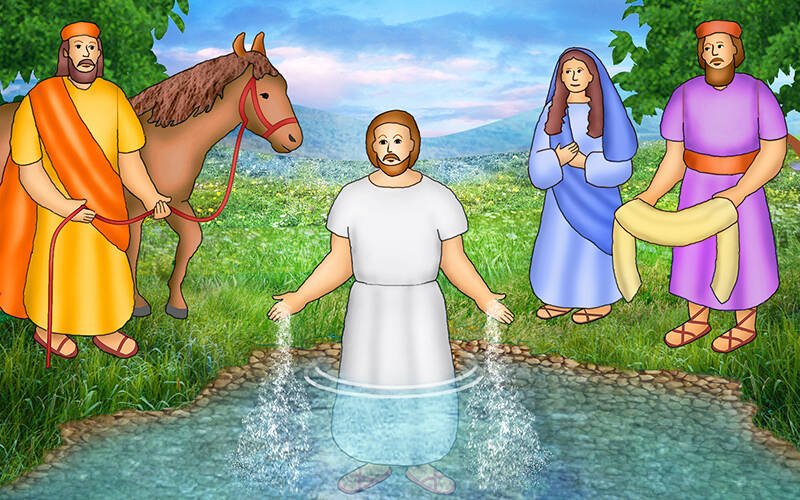 A man named Naaman commanded the king of Aram’s army. Although he was valiant and respected, Naaman was a leper.

In one of their raids against Israel, the Arameans had captured a little girl, who became the servant of Naaman’s wife.

“If only my master would present himself to the prophet in Samaria! He would cure him of his leprosy,” the girl said to Naaman’s wife.

Naaman went to the king and told him what the girl said.

“Go,” the king said. “I will send along a letter to the king of Israel.”

He went to the king of Israel and handed him the letter. It read: “With this letter I am sending my servant Naaman to you, that you may cure him of his leprosy.”

The king of Israel tore his garments, thinking that the king of Aram was trying to pick a fight with him.

Elisha, a prophet of God, heard what the king had said and sent him a message.

“Let him come to me and find out that there is a prophet in Israel,” Elisha said.

Naaman went to Elisha’s house and stopped his horse and chariot right outside the door. The prophet sent him a message.

“Go and wash seven times in the Jordan, and your flesh will heal, and you will be clean,” Elisha’s message said.

Naaman was angry. He had expected Elisha to come to him in person, call on the name of God and put his hand over the leprous spots on his skin to cure him.

“Are not the rivers of Damascus, the Abana and the Pharpar, better than all the waters of Israel? Could I not wash in them and be cleansed?” Naaman said and left in anger.

Naaman’s servants ran after him to reason with him.

“My father, if the prophet told you to do something extraordinary, would you not do it? All the more since he told you, ‘Wash, and be clean’?”

Naaman relented. He did as Elisha instructed, and his leprosy was cured.

Naaman returned to Elisha and stood before him.

“Now I know that there is no God in all the earth, except in Israel,” he said.

1. Who wanted to be cured of leprosy?

2. What was Elisha’s cure for leprosy?

As we read further in 2 Kings 5, we learn that Naaman was thankful that Elisha cured his leprosy, and he wanted to give the prophet a gift.

“As the Lord lives whom I serve, I will not take it,” Elisha said.

“If you will not accept, please let me, your servant, have two mule-loads of earth, for I will no longer offer holocaust or sacrifice to any other god except to the Lord,” Naaman said.

After Naaman had gone some distance, Elisha’s servant, Gehazi, ran after him. He wanted to have some of the gifts Naaman offered Elisha.

When Gehazi caught up to Naaman, he lied and said that Elisha wanted a talent and two festal garments for other people. Naaman happily had his servants give the items and more to Gehazi, who kept them for himself.

When Gehazi returned to Elisha, the prophet knew the evil thing Gehazi had done.

“The leprosy of Naaman shall cling to you and your descendants forever,” Elisha said, and Gehazi became a leper with skin like snow.

St. Hilarion was born around 291 in Palestine. After learning the ways of a monk as a teenager, he sought the life of a hermit.

Hilarion, who is credited with introducing monasticism into Palestine, had a hard time finding the solitude he craved. He became famous for his many miracles, so people were constantly seeking him out to cure their illnesses and demon possessions.

Using the hints provided, unscramble the letters in each word and arrange the words to form a quotation from the children’s story.

I am sending my servant Naaman to you.