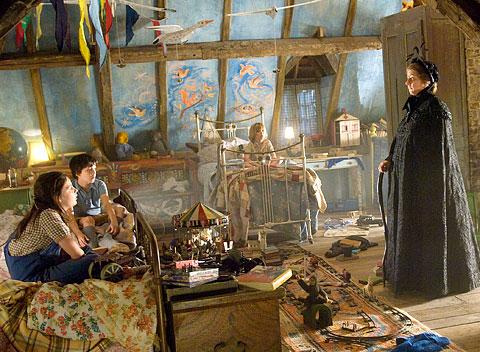 NEW YORK (CNS) — A sweetly nostalgic tale underpinned by lessons both children and their seniors would do well to take to heart, "Nanny McPhee Returns" (Universal) contains nothing genuinely objectionable. Running gags featuring mildly gross barnyard humor and a few scenes of slapstick violence, though, may give some parents pause.

Emma Thompson reprises her work as both writer and star, once again personifying the eerie but magically effective matron of the title in this second screen adventure based on Christianna Brand’s "Nurse Matilda" series of children’s books. This time she transports herself to wartime Britain — the first film was set in Victorian times — where she comes to the rescue of frazzled rural mother Isabel Green (Maggie Gyllenhaal).

With husband Rory (Ewan McGregor) away at the front, Isabel is failing spectacularly to cope with the raucous squabbling between her farm-bred brood — elder son Norman (Asa Butterfield), daughter Megsie (Lil Woods) and tow-headed tot Vincent (Oscar Steer) — and their snobbish London cousins Celia and Cyril Gray (Rosie Taylor-Ritson and Eros Vlahos). The latter are freshly arrived evacuees whose parents have sent them to the countryside for safety.

Thoroughly unimpressed by their new surroundings — surveying the Green’s manure-laden farmyard, Cyril, in one of the script’s many verbal and visual jokes on the subject, compares it to a "British museum of poo" — Celia and Cyril show an aggressive peevishness we later learn is due, at least in part, to parental indifference and emotional repression. Their temporarily fatherless cousins, needless to say, match them insult for insult and, all too soon, blow for blow.

Mysteriously appearing on Isabel’s doorstep, the initially frightful-faced Nanny — who gets to look more and more like Emma Thompson as her charges’ behavior improves — sets to work using the powers primarily vested in her gnarly (in every sense) walking stick to set things right. She soon has the children learning to cooperate, to share, to show courage in pursuing important goals and — especially after the war comes home to them in a potentially tragic fashion — to have faith in happy endings.

Nanny also works to thwart the schemes of Isabel’s conniving brother-in-law Phil (Rhys Ifans) who — for reasons of his own — has been pressing Isabel to sign away the family homestead in Rory’s absence.

Though the background conflict is intended to be both World War II and an archetypical, timeless struggle, the simple joys that delight the children — a picnic, a treat of ginger beer and the like — seem like those of an earlier era. And the closest thing to modern technology on display is an eccentric contraption of Rory’s invention designed to calm piglets by simultaneously playing music to them on a gramophone and wielding a set of brushes to scratch their tummies soothingly.

Under the influence of one of Nanny’s spells, said piglets contradict an old expression by flying through the air, then get together for a demonstration of balletic swimming that Esther Williams herself might have envied. Such scenes typify the silly but innocent fun of this family-friendly sequel.