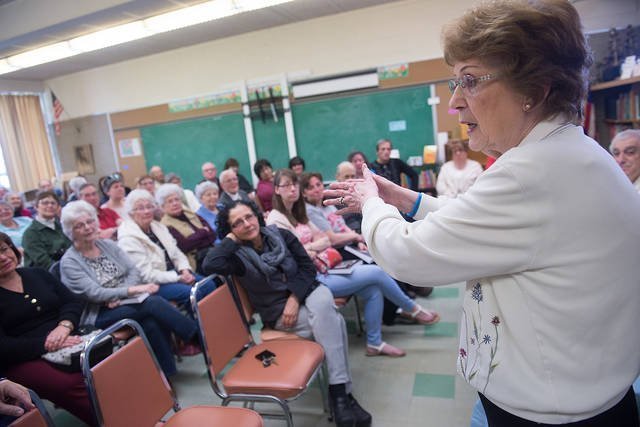 Marlies Adams DiFante, author of Queen of the Bremen: The True Story of An American Child Trapped in Germany During World War II, talks about her experiences during the opening of the St. Francis and St. Clare Parish library in Waterloo April 22. (Courier photo by John Haeger) 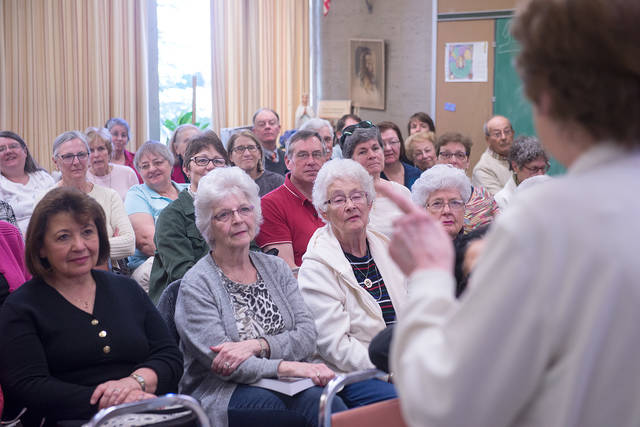 Marlies Adams DiFante, author of Queen of the Bremen: The True Story of An American Child Trapped in Germany During World War II, talks about her experiences during the opening of the St. Francis and St. Clare Parish library in Waterloo April 22. (Courier photo by John Haeger)

One childhood memory in particular stands out to Naples native Marlies Adams DiFante. Dressed in matching sailor suits, 5-year-old Marlies and her 6-year-old brother, Peter, had just won a talent show by reciting the Our Father, first in English and then in German. Their performance earned them the title of king and queen of The Bremen, which was an ocean liner traveling from America to Germany in August 1939.

“I think that was probably the last time I was happy in my childhood,” DiFante remarked. “When we got to Germany we started having problems, really bad problems.”

DiFante and her brother had boarded The Bremen with their parents and embarked upon what was to be a three-month visit to their parents’ homeland. Adolf Hitler declared war on Poland shortly after they arrived in Germany, however, and the family spent the next seven years trapped in a hellish existence in a war-torn land.

DiFante chronicled her experiences in a 2010 memoir, Queen of the Bremen: The True Story of An American Child Trapped in Germany During World War II. On April 22 she visited St. Francis and St. Clare Parish in Seneca County to discuss her book at an event held to mark the opening of a new library in the parish’s Ministry Center in Waterloo.

Carolyn Simolo, coordinator of the new library, invited DiFante to speak about her book because she was impressed by the author’s strong faith.

“Her Catholic faith kept coming through to me as I read the book,” Simolo explained.

Simolo said she was especially moved by DiFante’s determination to attend Mass, even when she was temporarily living apart from her family. Bombings targeting children had forced the evacuation of all young people from the city DiFante’s family was living in, and the children were split up. DiFante was sent to a rural village to live with her aunt, who, unbeknownst to the rest of the family, was a Nazi sympathizer and treated her niece cruelly. This woman intercepted DiFante’s letters to her mother and later lied to the child, telling her that her parents had died.

“She let me become so dirty ‚Ä¶ and I was lice infested. They ate my whole eyebrow away. I had not one friend. The children started beating me and calling me names,” recalled DiFante, who nonetheless walked to Mass alone each week. “I would pray, ‘Lord, please don’t forget me.’”

Her mother, meanwhile, prayed that her children would not be forced to join the Nazi party’s Hitler Youth program. While her children were spared, their exclusion marked them with a figurative bulls-eye, making them prime targets for other children’s cruelty, and the siblings were beaten regularly, recalled DiFante, who now lives in Greece and belongs to St. Lawrence Parish.

Meanwhile, the family received just half the amount of rations German families received, and they often supplemented their meager rations with vegetables and weeds. After years of existing on the edge of starvation, DiFante weighed just 42 pounds when she returned to the United States as a 12-year-old, and her 5-foot, 11-inch father weighed only 92 pounds, she said.

“It was just survival by prayer. If my mother didn’t have so much faith, I don’t think we ever would have survived,” DiFante said.

EDITOR’S NOTE: To purchase a copy of Queen of the Bremen, visit Facebook.com/QueenOfTheBremen