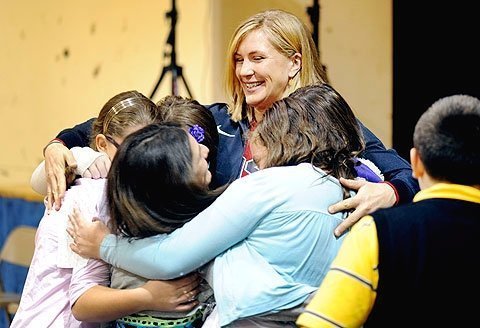 Olympic gold-medalist Meghan Musnicki grants a hug to a group of eighth-graders after giving a talk at St. Francis-St. Stephen School in Geneva Oct. 11.

GENEVA — Last August Naples native Meghan Musnicki stood on a podium in London and felt the weight of a gold medal around her neck as she watched the American flag flutter and listened to the familiar strains of the national anthem.

She and her eight American teammates had just earned gold medals by winning the women’s eight rowing competition at the 2012 Summer Olympics, a feat that would have seemed unfathomable back in the late 1990s when she was just an awkward teen with glasses, braces and pants that always seemed too short.

Musnicki encouraged the students to have faith in themselves and work hard to turn their dreams into reality. Musnicki, who stands 5 feet, 11 inches tall, said that when she was in high school she wasn’t the homecoming queen, a star athlete or the most popular student, and she had a tough time.

"I was just generally not what anyone would call cool. I remember thinking I wanted to have the coolest clothes, the most friends. At the time I thought it was so important, that it mattered," she said, noting that she eventually learned those things don’t matter at all. "Here I am years later and I’ve got an Olympic medal and it doesn’t matter what I wore in high school. I wish I would have known that then."

Once you leave high school, it no longer matters whether you were popular, a fact that can be difficult to recognize while you’re still in high school, she said. Nonetheless, Musnicki encouraged the students to remember that, and to make sure they don’t let others’ opinions of them influence their own opinions of themselves.

Musnicki, who grew up attending St. Januarius Church in Naples, said she played basketball and soccer at Naples High School and later Canandaigua Academy. She wasn’t really familiar with the sport of rowing when the rowing coach at St. Lawrence University approached her during her freshman year and urged her to think about taking up the sport.

"The coach said I would be good at it because of my size. I decided to give it a try and I fell in love with it. I was terrible at it, but I practiced and I really enjoyed it so I put a lot of effort into it because that’s what I wanted to do," she said.

She continued rowing even after transferring to Ithaca College, and her team won two NCAA national championships while she was in school. She had planned to go into nursing after graduating in 2005, but instead decided to see how much further she could take her rowing. She was invited to a national rowing camp and began training at an elite level in 2006, which required moving to Massachusetts and later to Princeton, N.J. She trained with the United States’ national team but was cut from it three times before finally making the team in 2010.

"It wasn’t something that was handed to me on a silver platter, and I had to work for it. It was really hard," Musnicki said.

Members of the national team are selected for one-year terms, so they have to try out for their spots again each year, she said, noting that soon she’ll move back to Princeton and resume training.

"It’s exhausting. I train six to seven days a week, two to four times a day, and it adds up to between six and nine hours that I commit every day to getting better at my skill, which is rowing. I had to give up a lot for it. I hardly ever see my mom and my sister, and I don’t have much of a social life," said Musnicki, who often goes to bed at 8:30 p.m. when she’s training so she can get up at 6 a.m. for practice.

Musnicki said she makes those sacrifices because she’s set goals for herself and is committed to achieving them. She doesn’t let herself get sidetracked by the risk of failure because she knows that if she doesn’t take risks, there’s no way she’ll reach her goals, Musnicki said. She encouraged the students to set goals as well, and said she was inspired by a conversation she’d had with a student earlier that morning. When a young boy asked her if she was in the Olympics she replied that yes, she had been in the Olympics, and she asked if he’d been in the Olympics.

"He said, ‘No, not yet.’ That’s good. You don’t have to go to the Olympics yet, but if that’s what you want to do, you can do it. If you don’t even attempt it you’re definitely not going to do it," she said.

After answering a number of students’ questions, Musnicki let St. Francis-St. Stephen’s teachers pass her gold medal around so the students could touch it and posed for pictures with each class. Sixth-graders Tayah Payne, Kaylee Smolinski, Cecilia Foe, Emily Sabatini and Bailey Kehoe also asked Musnicki for her autograph.

"She’s my role model and my idol. She serves as an everyday inspiration for little stuff and big stuff," Tayah said.

"It’s so cool that she came from (the area) where we are," Bailey added.

"I think she gave us a very good message, to tell us to keep giving it our all and to make our goals," Louis said.