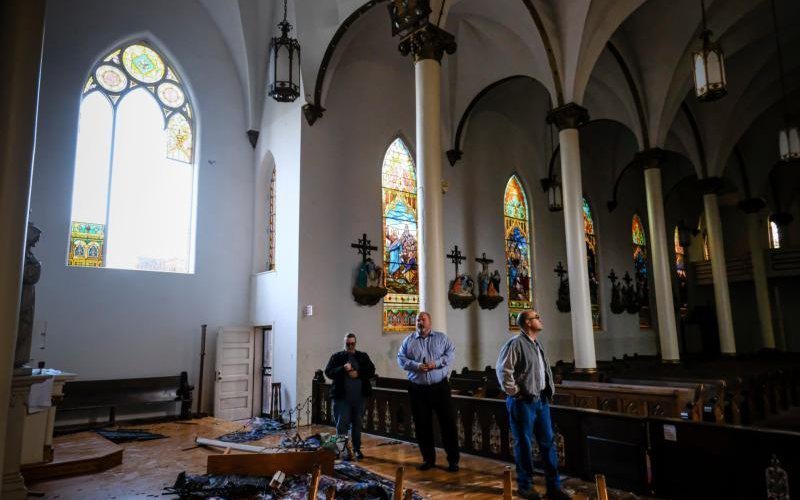 People look over the damage to the Church of the Assumption following a tornado in Nashville, Tenn., March 3, 2020. At least two tornadoes tore through Middle Tennessee early March 3, killing at least nine people and cutting a swath of destruction that stretched through the city for miles. (CNS photo by Rick Musacchio/Tennessee Register)

NASHVILLE, Tenn. (CNS) — The historic Church of the Assumption in Nashville’s Germantown neighborhood was one of a number of churches and other buildings that suffered significant damage early March 3 when a tornado cut a swath of destruction through the city that stretched for miles.

At least 24 people died from storm-related injuries, including five children under the age of 13, according to news reports. Civil authorities said initially 90 people had been reported missing, but by the next day, most had been found.

Two tornadoes swept through Middle Tennessee, and the National Weather Service confirmed the one that touched down in east Nashville was an EF-3.

“We are fortunate in so much as we have been able to determine thus far, the employees of the diocese, our parishes and schools have escaped harm and for this we are grateful,” said a statement from the Nashville Diocese. “We are assessing building damage at the Church of the Assumption, Holy Name, St. Vincent de Paul and Holy Rosary as well as other parishes that are in the path of the storm.”

The Church of the Assumption is one of the oldest Catholic churches in the diocese. It was built in 1858 with, in part, reclaimed bricks from Nashville’s first Catholic church, Holy Rosary Cathedral. Assumption served the German immigrants of Nashville and was occupied by Union troops during the Civil War.

“Loving God, be with all those who are suffering in the aftermath of this violent storm,” Bishop J. Mark Spalding said in a prayer he offered after the violent storm. “Grant peace to those who have died and comfort and strength to those who grieve them.

“May those who have suffered damages or lost homes and possessions find support in our brothers and sisters in Christ and consolation in the knowledge of your presence,” he continued. “Guard and guide first responders and aid workers, protect those who are most vulnerable, and keep us all safe in your unending love.”

Nashville’s Catholic Charities agency was in the process of contacting parishes to assess needs that they and their people may have. “Once this information is gathered, we will share a further update and offer ways in which we may all work together to offer support,” the diocese said.

Donations can be made at www.dioceseofnashville.com.