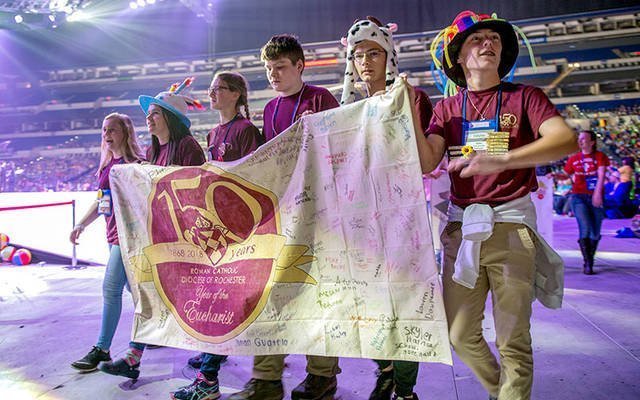 Anna Crawford (far left) from the cluster of St. Agnes, Avon/St. Rose, Lima/St. Paul of the Cross, Honeoye Falls, carries the Diocese of Rochester banner during the opening ceremony of the National Catholic Youth Conference in Indianapolis Nov. 16. (Courier photo by Jeff Witherow)

For Catholic teens looking to fortify their faith, they found strength in numbers — big numbers — in downtown Indianapolis this past Nov. 16-18.

That’s where upwards of 25,000 youths and adult chaperons, including more than 400 teens from the Diocese of Rochester, gathered for the National Catholic Youth Conference. Nearly 50 young people from Southern Tier parishes were part of the diocesan group.

NCYC featured a mix of spirituality, fun and education in the form of keynote presentations, workshops, concerts, dances and Masses. Service was another key component; for example, Andrea Wolfanger and Maddie Shafer of Holy Family Parish in Steuben and Livingston counties took part in such on-site projects as packaging meals for Catholic Relief Services.

According to participants, a feeling of unity permeated the conference’s atmosphere in all activities. Sarah O’Neil, 14, from the cluster of St. Matthew, Livonia/St. Mary, Honeoye, said that “being with 25,000 other teens to connect with God was awesome, and getting to meet new people from all over the country to share our faith really was amazing.” She added that she grew closer with her own youth-group members, as well, during their three-day pilgrimage.

“There were a lot of like-minded people under one roof, and that was nice,” agreed Liam Cooper, 15, a member of Ithaca’s Immaculate Conception Parish. Acknowledging that “sometimes I feel like the only Catholic teen at school,” Liam said that being among such a large throng of Catholic peers “helped me feel reassured in my faith.”

“It was so amazing to see so many Catholic youth like myself gathered into (Lucas Oil) stadium. The energy given off by all the people was empowering,” added Violet Koehler, 17, who was part of an NCYC contingent from St. John Vianney and Our Lady of the Valley parishes in Steuben County.

Violet said her NCYC experience made her more deeply aware that “being Catholic is so much more than going to Mass and praying. It’s something that holds us together and makes us feel as though we are part of something. It gives us strength and guidance.”

“It is a place to fully express your faith while 25,000 other kids do it with you. No one judges anyone,” stated Anna Crawford, 18, from the cluster of St. Agnes, Avon/St. Rose, Lima/St. Paul of the Cross, Honeoye Falls. Anna — whose mother, Mary Mulligan-Crawford, also attended NCYC as a chaperon — enjoyed a bonus experience at the conference, being among a handful of teens selected to carry the Diocese of Rochester banner while processing into Lucas Oil Stadium for the opening ceremony Nov. 16.

The conference’s large crowds and frequently high energy level apparently didn’t distract young participants from locking in on their faith. For instance, Liam noted, “Adoration was cool — 25,000 people in complete silence for our Lord. It was incredible.”’

Meanwhile, Claire Galanthay said that receiving the sacrament of reconciliation at the Indiana Convention Center was “an experience I will never forget.”

“I walked in and there were at least 50 priests all hearing confessions and absolving people’s sins. The presence of God was so strong there that I knew I would be forgiven and would always be loved,” recalled Claire, 17, who was one of 14 NCYC youth pilgrims — including her sister, Gigi — from Ithaca’s St. Catherine of Siena Parish.

NCYC is held every two years, and the Diocese of Rochester traditionally provides one of the largest representations in the United States. Ashley Blank, youth minister at St. Catherine, said she and other parish leaders are big proponents of NCYC involvement “since we have witnessed its transformative effect” by the end of each conference.

She offered a stirring example from this past November, noting that parish teens have often told her they were reluctant to talk about religion at school, or wear shirts bearing religious symbols, for fear of being ridiculed. However, Blank said, many of those concerns vanished thanks to their time in Indianapolis.

“At NCYC they realize that it is cool to be Catholic,” she said. “Many of the youth that came back from this year’s trip wore their NCYC gear or other religious shirts the first day back at school. The experience changed them.”

EDITOR’S NOTE: For a multimedia project on the Diocese of Rochester’s participation in the 2017 National Catholic Youth Conference, visit www.catholiccourier.com/ncyc2017.