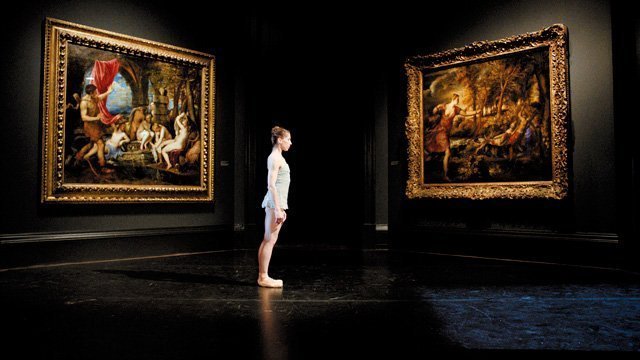 This scene of a gallery with religious-themed paintings is included in the documentary “National Gallery.” Many scenes from Frederick Wiseman’s documentary involve Christian imagery.

EDITOR’S NOTE: "National Gallery" will be shown at the George Eastman House in Rochester March 11.

"What we must remember is how this was originally intended to be seen!" a docent trills as she explains the San Pier Maggiore Altarpiece ("The Coronation of the Virgin") to her tour group. The 14th-century masterpiece by Jacopo di Cione was commissioned for a church in Florence that was demolished in 1784.

In the center wooden panel, Christ crowns Mary while both are seated on white thrones surrounded by angels. In panels to the left and right, saints in ornate robes and with iridescent golden halos kneel in adoration.

Imagine seeing the altarpiece only by candlelight, the docent instructs. Under flickering illumination in a sacred space, worshippers may have seen the saints appear to stir to life. "The painting would be acting as a sacramental pathway to heaven."

Wonderful, inspiring. Then, under the patient gaze of Wiseman’s camera, the docent, caught up in her oratorical spell, asks her group to imagine that the saints are reacting to "a fluffy kitten."

Wiseman’s documentaries — this is his 39th — are famed for never quite explaining what’s going on. There are no voiceovers, narration or names on the screen.

His approach, Wiseman told a recent screening audience in Silver Spring, Maryland, never changes: "Start with an open mind and an empty head." In 2012, he spent 12 weeks filming at London’s massive National Gallery on Trafalgar Square. It took him 13 months to edit 170 hours of digital footage.

Wiseman’s appeal to the audience’s intelligence sometimes frustrates. Artworks can’t explain themselves. So, like a self-guided tour, you’re left on your own to decide whether what he’s showing you is important or not.

Docents and staff members, including harried museum director Nicholas Perry, went through their daily tasks before the camera without becoming self-conscious. "No one objected," Wiseman observed. "Why, I don’t know."

To ensure that he doesn’t benumb audiences with mostly Renaissance works, Wiseman, at intervals, includes scenes from two life-drawing classes at the gallery where nude male and female models are sketched.

Nothing prurient is going on, and the instructor discusses techniques as the students work — but you’re unlikely to remember a single word of it. The sequences are Wiseman’s cinematic jolt of caffeine to secure your focus before he leads you to more art.

Wiseman shows about 250 paintings, only a fraction of which are explained by docents, curators and preservation experts. Self-portraits by Rembrandt glide by, seemingly amused.

Blink and you’ll miss Michelangelo’s rendition of Salome receiving the head of St. John the Baptist. Yes, that’s Nicolas Poussin’s "Adoration of the Golden Calf," but Wiseman insists we move along.

Unexpected moments include a young docent enthusiastically describing a 17th-century painting, Orazio Gentileschi’s "The Finding of Moses," to young children. They’re not quite rapt, although exceedingly well-comported.

In the documentary’s emotional highlight, Larry Keith, the gallery’s head of conservation, discusses a Diego Velazquez painting from 1618, "Christ in the House of Martha and Mary," undergoing restoration.

It illustrates a passage from the 10th chapter of the Gospel of St. Luke, with two women in 17th-century attire preparing a meal. An inset — the museum calls it a wall opening, although it looks more like a painting on the wall — shows Mary rapt at the feet of Christ, with her sister Martha standing by grumpily because she has to serve the meal. When Martha complains, Christ admonishes, "Mary has chosen the better part and it will not be taken from her."

Keith not only limns the painting’s message — he’s done this many times, obviously — he also talks about how this artwork is permanent, yet reinterpreted by each succeeding generation.

It’s a fragile interaction. Oil paint becomes transparent over centuries. Restorers touch up colors, but because they do so over a thin layer of varnish, their painstaking work, which takes several hours, can be wiped away in minutes by a future restoration. Restoration can "renew" art for the future, but never replaces an artist’s intent.

Art curated and preserved in a gallery has permanence, Wiseman reminds us. Those who view it are merely passing shadows, though ones who get to choose their own version of "the better part."