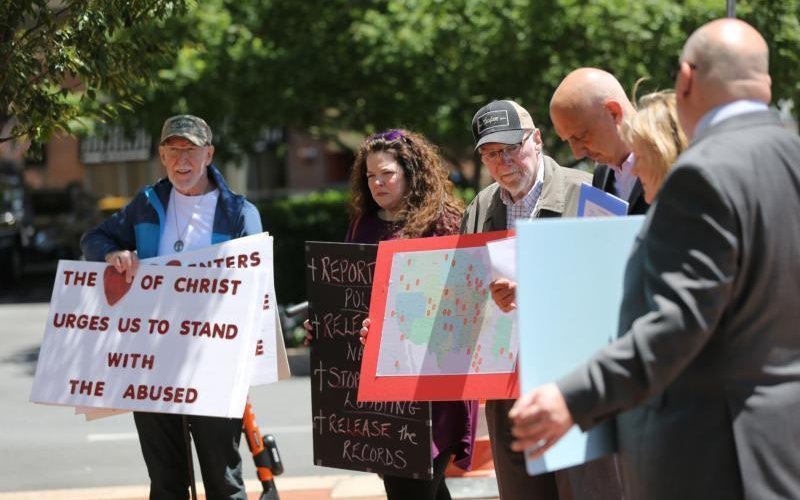 Survivors Network of those Abused by Priests and other groups gather outside a Baltimore hotel June 11, 2019, on the first day of the spring general assembly of the U.S. Conference of Catholic Bishops. (CNS photo by Bob Roller)

BALTIMORE (CNS) — National Review Board chairman Francesco Cesareo offered the U.S. bishops meeting in Baltimore a series of recommendations that he said will strengthen the church’s response to the ongoing clergy sexual abuse crisis.

The recommendations made June 11 during the U.S. Conference of Catholic Bishops’ spring general assembly in Baltimore included a call for a greater role for laity in investigating allegations of abuse or reaction to reports of abuse against bishops.

Cesareo also said National Review Board members recommend a thorough review of the “Charter for the Protection of Children and Young People” and a revision in the audit process regarding diocesan implementation of the charter, which governs the church’s response to clergy abuse allegations.

Strong measures are necessary to show that while progress has been made since the charter’s adoption in 2002, the bishops would demonstrate that they are serious in their response to clergy abuse in response to the mistrust and serious questions laypeople still harbor.

“My hope is that they will seriously consider the recommendations we made on the four action items come to recognize that the proposals that we’ve made are only going to strengthen their response,” Cesareo told Catholic News Service after his address.

“It’s not meant to undermine their authority but in reality strengthen their position in dealing with the questions around this issue as opposed to a challenge to their authority or position. That’s not the intent. The intent is how can we together work on this issue to put you, as the leaders, in the best possible position to effectively and definitively deal with this,” he said.

Cesareo stressed to the bishops the need to carry out what Pope Benedict XVI described as the laity’s co-responsibility to help build the church.

He told CNS that co-responsibility means “together we can have a role to play for the well-being of the church.”

Cesareo also admitted that he has used strong and firm language in delivering the review board’s recommendations “to show the urgency of the situation and that we can’t just keep pushing this down the road.”

In his address to the assembly, Cesareo called on the bishops to improve the audit of dioceses to ensure their compliance with the charter so that it is “more thorough and independent.” He said the audit is a means for the bishops to establish their credibility with laypeople.

A working group, composed of three members of the bishops’ Committee on the Protection of Children and Young People and three lay members of the National Review Board, has been discussing a framework for improving the audit, he said. The focus has been on allowing the outside contractor that is hired by the USCCB to conduct the audit to be more independent and flexible in its work, he said.

Cesareo recommended that changes in the audit process occur as soon as possible so they can be implemented in the next audit cycle beginning in 2021.

“A strengthened audit would provide a means for improving your dioceses’ existing methods to protect and heal,” Cesareo said. “Virtually all your dioceses, including those where problems came to light under the microscope of the media and attorney generals, have easily passed the audit for years since the bar currently is so low. Now is the time to raise the bar on compliance to ensure the mistakes of the past are not repeated.”

Cesareo also recommended that the charter “should be revised immediately to explicitly include bishops and demand for greater accountability.”

While such a revision has been suggested to the bishops in the past, Cesareo said the time has come for a proposal to be addressed. Among the changes he recommended include the reporting of all allegations of sexual abuse of minors to diocesan review boards; the need for review boards to meet annually to assist with diocesan policy reviews; consideration of continual supervision and monitoring of offenders who have not been laicized; and the start of parish audits.

“Despite ongoing challenges, positive momentum has been evident in the church since the initial approval of the charter and the audit,” Cesareo added. “Any delay in revising the charter or implementing an enhanced audit would not only put children at risk, but could signal a step backward in the church’s efforts.”

The review board chairman cited Pope Francis “motu proprio” regarding the bishops’ plan to adopt new standards to govern their own accountability on handling abuse claims.

The document, titled “Vos estis lux mundi” (“You are the light of the world”), is a new universal law from the pope to safeguard its members from abuse and hold its leaders accountable. It governs complaints against clergy or church leaders regarding the sexual abuse of minors or vulnerable persons. The U.S. bishops will vote on directives for implementing this church law later during the spring assembly.

Cesareo said the article 13 of the document allows that the bishops of a province may include qualified persons, including laity, to be part of the investigation of a bishop who has had a claim filed against him.

“The NRB urges that this must be the case in the United States through the establishment of an ad hoc lay commission, either on the national or local level,” he said.

He said such lay involvement would “restore the trust of the faithful in the bishops and even in the Holy See’s own processes for holding bishops’ accountable.”

The pope’s new juridical instrument calls for a “public, stable and easily accessible” reporting system for allegations; clear standards for the pastoral support of victims and their families; timeliness and thoroughness of investigations; whistleblower protection for those making allegations; and the use of “proven experts from among the laity”; and the oversight of the metropolitan (archbishop) for such investigations in his province. The U.S. Catholic Church has 32 metropolitans.

However, Cesareo said that the metropolitan archbishop “should not be the sole gatekeeper of allegations that come forward” because it could lead to “mishandling of an allegation.”

“You have a great opportunity,” he said, “to lead by example and help show dioceses and episcopal conferences around the world not only how important it is for lay involvement to ensure greater accountability and transparency, but also how laity and the episcopacy can be co-responsible for the church’s well-being.”