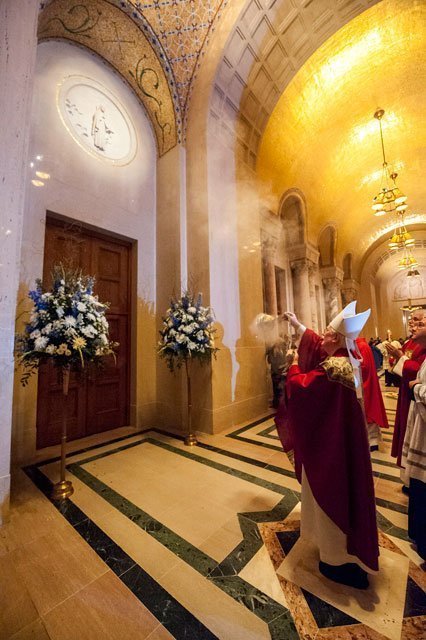 Retired Bishop J. Kevin Boland of Savannah, Ga., uses a censer during the dedication of a bas-relief of Our Lady Star of the Sea at the Basilica of the National Shrine of the Immaculate Conception in Washington May 24. Bishop Boland is the U.S. promoter of the Apostleship of the Sea, a worldwide Catholic maritime ministry.

WASHINGTON (CNS) — A newly dedicated bas-relief sculpture at the Basilica of the National Shrine of the Immaculate Conception in Washington portrays Mary calming the troubled sea, with the North Star above her head.

The image of Our Lady Star of the Sea "will become a point of spiritual pilgrimage for the people of the sea" when they visit the shrine, said a news release announcing the sculpture, installed in the narthex of the shrine’s Upper Church.

It also "will help draw attention to the important services that our mariners, fishermen and sea forces have done for our country and the world," the release said.

The bas-relief "roundel," as it is called, is a gift of the Confraternity of Our Lady Star of the Sea and the Apostleship of the Sea USA. Both Catholic organizations have a strong devotion to Mary under the title of "Stella Maris," or Star of the Sea. She is the patroness of seafarers and their families.

The two groups commissioned Lou DiCocco and the Liturgical Arts Studio in Havertown, Pennsylvania, to create the sculpture.

Retired Bishop J. Kevin Boland of Savannah, Georgia, dedicated it May 24 during a special Mass. The main celebrant and homilist for the Mass, he is the U.S. bishop-promoter of the apostleship, a worldwide Catholic maritime ministry.

Begun in Glasgow, Scotland, in 1920, the Apostleship of the Sea takes the form of seaside chapels and Catholic welcome centers as well as on-ship clergy and Catholic chaplaincy programs.

The apostleship, which operates under the Pontifical Council for Migrants and Travelers, has an international network of chaplains and volunteers who serve the pastoral and social needs of mariners and those working in the fishing industry, as well as their families, and all who work and travel on the waterways of the world.

The U.S. branch of the apostleship was begun in 1976 and falls under the pastoral care of migrants, refugees and travelers, a division of the Secretariat of Cultural Diversity in the Church at the U.S. Conference of Catholic Bishops in Washington.

It is considered the professional association of Catholic seafarers, port chaplains, lay ecclesial ministers and priests serving on cruise ships. The agency also advocates for the rights of mariners.

Founded in 1973 in the Diocese of Houma-Thibodaux, Louisiana, as Our Lady Star of the Sea rosary group, the confraternity began a novena to Mary to seek protection from hurricanes and natural disasters, and to enable seafarers and those making their livelihood by the sea to seek her protection. – – –

Editor’s Note: More information about the Apostleship of the Sea USA can be found at www.usccb.org/aos.