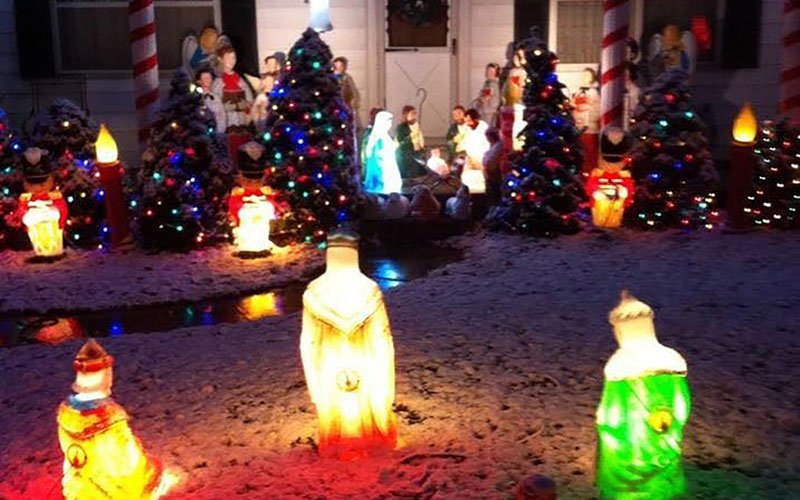 VIENNA, Mo. (CNS) — Darkness doesn’t have a prayer when it comes to Jim and Georgena Fick’s yard at Christmastime.

The heavy plastic luminaries, known as blow molds, give the luster of midday along the Ficks’ stretch of U.S. 63 in Vienna.

A matching Nativity scene shines alone inside the couple’s arc-shaped driveway — including the Holy Family, angels, shepherds, wise men and farm animals — clearly set apart from all the rest.

“I’m an old-time religious man. That’s why I don’t put Santa Claus up in front of the Holy Family,” said Jim Fick, a Brinktown native who has been a member of Visitation Parish in Vienna for 65 years, and whose wife has been a Visitation parishioner her whole life.

“That’s the way I was brought up and the way I’m going to be until I die,” he told The Catholic Missourian, newspaper of the Diocese of Jefferson City.

Blow molds, illuminated from the inside by old-school incandescent lightbulbs, were once a mainstay of American Christmas decor, reaching their peak of popularity in the 1950s through the 1970s.

The Ficks began collecting the artifacts at flea markets and rummage sales around 30 years ago. Some are from Springfield and Joplin, Missouri, and Belleville, Illinois, and a few other places.

“We have contacts at some of these flea markets,” he noted. “We have friends who are on the lookout for them. They buy them and resell them to us if they find them at yard sales.”

At last count, the couple had 105 Santa Clauses and 30 snowmen to display in their yard.

Their vintage illuminated Nativity set includes about 25 pieces, including carolers, angels, sheep, cattle and a donkey.

Fick replaced all the retro incandescent bulbs with energy-efficient LEDs, saving money and tamping down the display’s environmental impact.

“Most don’t go more than 10 or 12 watts,” he noted. “Everything has a light in it, but my electric bill is nowhere as big as an air conditioner.”

All the figures have outdoor wiring and are hooked up to switches on timers.

Started with one Santa Claus

The Ficks met in high school and were both 20 when they got married in Visitation Church.

They bought their home in Vienna a few years later and have lived there for all but seven years of their married life.

“I always put Christmas lights up on the outside of the house, even way back when the kids were growing up,” Fick recalled.

The couple acquired their blow mold Nativity set in 1982, with the other characters following.

“We started with one big old Santa Claus from the Rolla Kmart,” Fick recalled.

The winter hobby flourished after he retired in 1998.

“My wife and I would go out on Saturdays,” said Fick. “We started seeing these things sitting around for little or nothing, and we started buying them.”

Over time, they filled up their front yard and started decorating the neighboring lot, down to the home where one of their sons now lives.

People are often amazed when they drive by.

“Sometimes, someone will send me a Christmas card, saying they enjoy the lights,” said Fick. “Or if they see you outside, some people will stop and talk to you.

“You also see a lot of cellphones sticking out of people’s car windows,” he observed.

The hard work of putting up the display lies not in carrying the figures from storage into the yard and wiring them up.

“The wind here blows all the time,” Fick noted. “You have to stake them and post them and tie them down. Otherwise, if you get a good west wind, they’ll wind up on the other side of the highway.”

“The bulbs will sometimes get loose just from the vibration of having them turned on,” said Fick. “The wind can shake them up some, too, outside of getting blown over in a storm.

“Sometimes if they crack, I hot-glue them,” he said. “If a piece breaks out, I cut up a milk carton and patch it up.”

Several of their grown sons and daughters and grandchildren, some in Jefferson City, have taken up the blow-mold tradition and are decorating their yards with similar abandon.

“If you see a lot of them in one yard, you can figure we gave them to them,” said Fick.

As for the display on Highway 63, “we cut back some this year,” he said.

“I’m going to be 86 years old next year. If it weren’t for my son and grandson from Jefferson City coming down and the boy next door helping, I wouldn’t be able to get it done anymore.”

He hopes that people who drive by and notice the display will pray for him and his family to stay well, and for the Catholic Church to be strong in its witness throughout the year.

He prays that people will take the layout of display to heart.

“The Nativity is in the center of everything,” he noted.

Nies is editor of The Catholic Missourian, newspaper of the Diocese of Jefferson City.