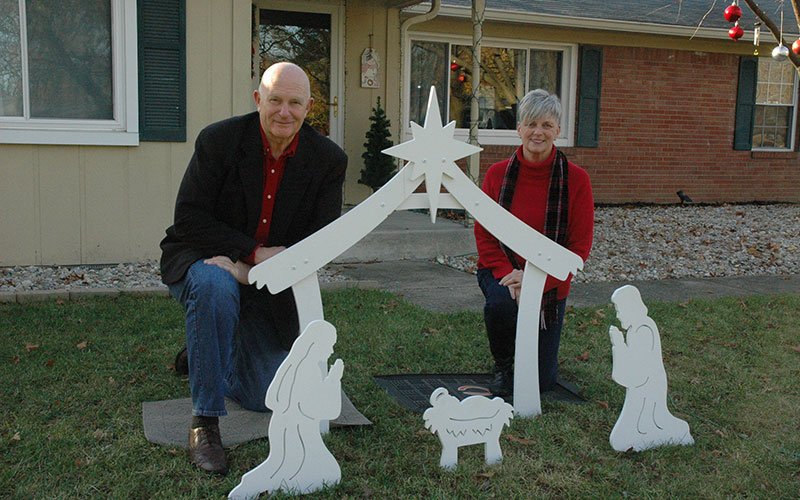 INDIANAPOLIS (CNS) — Jim Liston believes his idea of emphasizing the true meaning of Christmas is so simple that he wonders why it took him so long to think of it.

The idea came to Liston as he traveled through the neighborhoods around his Indianapolis home and saw how many people decorated their houses with brilliant light displays and filled their lawns with large, inflated Santas, reindeer and snowmen.

It suddenly hit him that he rarely saw another kind of Christmas display.

“It’s almost an anomaly when you see a Nativity scene,” said Liston, a member of St. Thomas Aquinas Parish in Indianapolis. “We’re in a society where everything about Christmas is glitz and consumerism. The simplicity of the Nativity scene struck me right in the heart. This is what Christmas is all about. I thought, ‘Why don’t I get one?'”

Liston not only got one — and loved it — he also had the grand idea to make central Indiana the “Outdoor Nativity Scene Capital of the United States.”

He set his plan in motion this year with a two-part approach. He contacted the manufacturer that made his Nativity scene to see if he could negotiate a reduced price for a large order.

He also reached out to all the Catholic schools in the Indianapolis deaneries and in nearby Hamilton County to have them ask their families who would be interested in buying a Nativity scene to display in front of their homes.

“I thought it would be a good project for any Catholic school for Advent,” Liston told The Criterion, newspaper of the Archdiocese of Indianapolis. “I thought that if we could sell 150 to 200, that would be a good first year. Then I got a call from Roncalli High School (in Indianapolis), and they wanted 170.”

In all, Liston ordered 520 Nativity scenes this year. Besides Roncalli, orders came from a combination of central Indiana schools and parishes, including some in the Diocese of Lafayette.

“More than 500 Nativity scenes are being set up in central Indiana that weren’t there last year,” Liston said. “That’s going to have an impact.”

Each school and parish that participated also received an extra financial benefit.

Liston negotiated with the manufacturer to reduce the usual $105 cost for the Nativity scene to $80. Then $20 was added to the price of the scenes sold by the schools and parishes and each school and parish could use the extra revenue for a project of their choice.

In the Indianapolis Archdiocese, St. Thomas Aquinas School will use the $20 profit on each scene to help defray the cost of a trip to Washington for its eighth-grade class. St. Luke the Evangelist Parish used the profit to help with costs for youths who attended the National Catholic Youth Conference in Indianapolis in November. Cathedral High School put the profits from its 70 scenes into its tuition assistance program for students in financial need.

As the coordinator for the Nativity scene project at Cathedral, Dave Worland purchased one for his home. He put it up in his front yard on the first day of Advent, which drew a mix of compliments and questions from neighbors taking a walk or walking their dogs.

One of the questions came from some boys in the neighborhood. They saw Mary kneeling as part of the scene and Joseph standing. They wanted to know where baby Jesus was. Worland explained that Jesus will be added on Christmas Eve, telling them that “right now, we’re anticipating, we’re waiting.”

The boys said they would return to see the Nativity scene then.

“It gives us an opportunity to talk about it, and hopefully even educate people about it, whether they’re Christian or not,” said Worland, Cathedral’s senior vice president for mission and advancement and a member of St. Matthew the Apostle Parish in Indianapolis.

The project also has received an enthusiastic response in St. Roch Parish in Indianapolis, where 53 Nativity scenes were purchased.

“I know people are really excited about having the Nativity scene,” said Jamie Riedeman, the communications coordinator for St. Roch Parish. “People are looking forward to see who else has one. Everybody keeps saying, ‘I’m going to drive around the south side to see how many I can find.’ It’s a neat way to connect with people.”

The Nativity scene project is an effort of the Catholic Business Exchange, a group that Liston founded with the threefold mission of promoting faith, friendship and business.

“We pride ourselves on doing projects that no one else in the community is doing,” he said. “This seems so logical, it makes so much sense, but no one had ever done it. I do think there’s room for growth. People have asked me countless times about getting one. We’ve had at least five or six schools or parishes who say we’re in for next year.”

For Liston, it all goes back to the purpose of the project and the simplicity of the Nativity scene.

“There’s the outline of the stable, Mary, Joseph and Baby Jesus in the crib. No sheep, no cows. It’s the Holy Family,” he said.

“This is to remind people of what Christmas is truly about, to get back to the basics of what this season is all about — the simple presence of our Savior, Jesus Christ,” he added. “The simplicity of the Nativity scene says it all.”