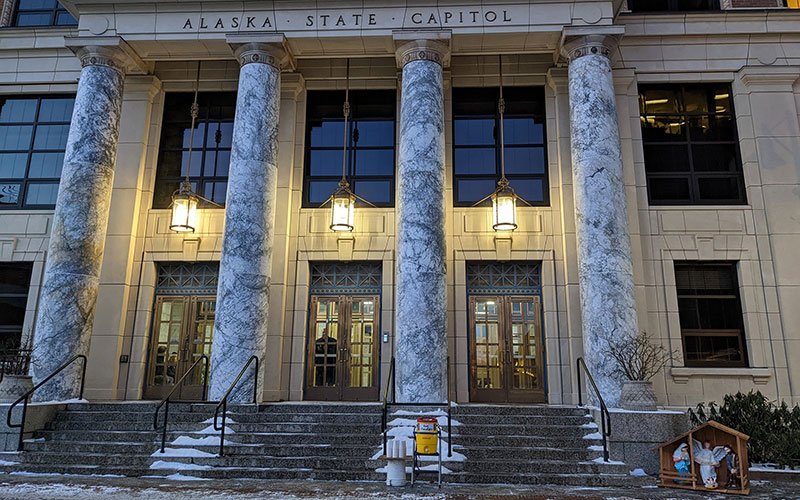 A Nativity scene placed in front of the Alaska Capitol in Juneau is seen in this December 2022 photo. (CNS photo courtesy American Nativity Scene)

CHICAGO (CNS) — Private citizen groups have arranged for Nativity scenes to be on display at 43 state capitols around the country, a record number, according to a not-for-profit law firm’s tally.

The Chicago-based Thomas More Society said Dec. 20 that the number of displays is notable despite the secularization of Christmas throughout the U.S.

Four new displays depicting the biblical description of the birth of Jesus in a manger have been erected this year, the society said: Alaska, New York, Utah and Virginia.

“The message of hope delivery by the baby Jesus celebrates the joy of new life. This troubled world can benefit from more hope and more joy,” Ed O’Malley, president of the American Nativity Scene, said in a news release from the society.

The organization works with the law firm to ensure that private citizens can sponsor a manger scene on public property.

Thomas Olp, Thomas More Society vice president and senior counsel, said in a statement that state laws in large part allow government entities to erect and maintain celebrations of the Christmas holiday season or allow private citizens to put up manger scenes as long as “the sole purpose is not to promote its religious content.”

In addition, such displays must be “placed in context with other symbols of the season as part of an effort to celebrate the public Christmas holiday through traditional symbols,” Olp said.

“We pray that the Nativity scenes of the Christmas season will help to foster a sense of unity and peace on earth,” he added.

The state capitol sites without a privately sponsored Nativity display in 2022 are Alabama, Colorado, Connecticut, Delaware, Nevada, Oregon and Tennessee.