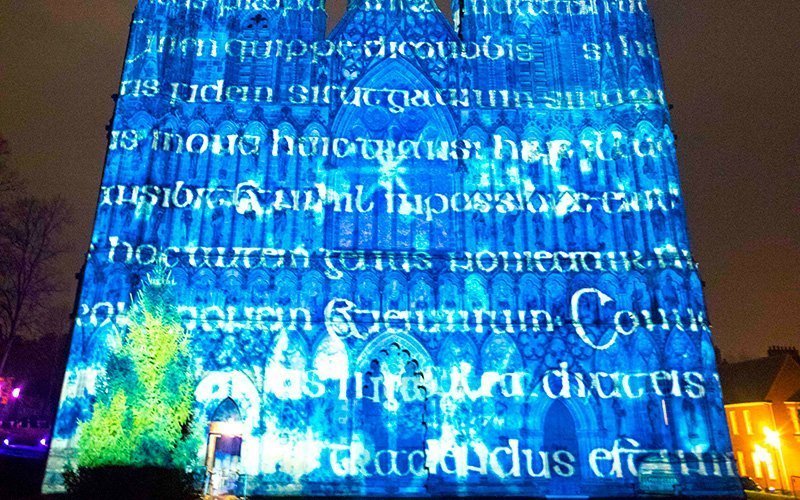 This 2018 photo of a Luxmuralis light production at the Lichfield Cathedral in Staffordshire, England, shows the images projected onto the front of the church. Luxmuralis is producing "Cathedral Illuminated: The Manger," a sound and light show to be projected on the Cathedral of St. Paul in St. Paul, Minn., Dec. 17-19, 2020. (CNS photo courtesy The Cathedral Heritage Foundation)

ST. PAUL, Minn. (CNS) — The Cathedral of St. Paul will become the canvas Dec. 17-19 for a light and sound show about Jesus’ birth.

From 6 p.m. to 9 p.m. on those three days, British company Luxmuralis will project images on the cathedral’s east-facing facade celebrating the Nativity story in a show called “Cathedral Illuminated: The Manger.”

Spectators will be able to view the show from their cars along John Ireland Boulevard in front of the cathedral in St. Paul.

The 12-minute production, which will run on a continuous loop each evening, is Luxmuralis’ U.S. debut. It features the art of sculptor Peter Walker and an original score by composer David Harper. The score will be broadcast to spectators on a “hyper-local” radio frequency, according to a news release.

The Cathedral Heritage Foundation, a St. Paul nonprofit that aims to preserve the cathedral as a world-class treasure, is presenting the show for free.

“We are so pleased, thanks to the generosity of our community sponsors, to have Luxmuralis debut in America” on the cathedral’s “magnificent east fa√ßade,” Mary Schaffner, chairwoman of the foundation board, said in a Nov. 25 statement.

“Please join us in sharing the season’s messages of joy and peace on earth as this challenging year draws to a close and we look forward to the New Year,” she added.

Luxmuralis’ other art projections have appeared throughout Britain and elsewhere in Europe.

“Our Luxmuralis artwork is designed to present artwork in a way that brings the stories we represent to life, in new and contemporary ways,” said Walker, who is also Luxmuralis’ lead artist and artistic director, in a statement.

“They are about showing the most striking images and curating sound and light in such a way that it reflects back at us the world around us. Each of our Christmas illuminations end on an image that is designed to bring art history, light and beautiful music to our audiences, from works of the renaissance to images of our world.”

The show’s final artwork includes the Black Madonna and Child stained-glass window from Our Lady of the Assumption in Charlotte, North Carolina.

The show will run concurrently with a show at the Lichfield Cathedral in Staffordshire, England, “showing accessibility for all and unity between our cities, which is key to our artwork,” Walker said.

As per Minnesota Gov. Tim Walz’s most recent COVID-19-related “Four-Week Dial Back” executive order, spectators should not walk to the show or leave their vehicles during the show. St. Paul police officers will direct traffic during the show.

The Cathedral Heritage Foundation also will livestream the show from its Facebook page, https://www.facebook.com/cathedralheritagefoundation.

The show has over a dozen community sponsors, including Minnesota Public Radio, Pioneer Press and Xcel Energy Minnesota.

Editor’s Note: More about Lumuralis and its light and sound projection projects can be found at http://projectionartgallery.com.