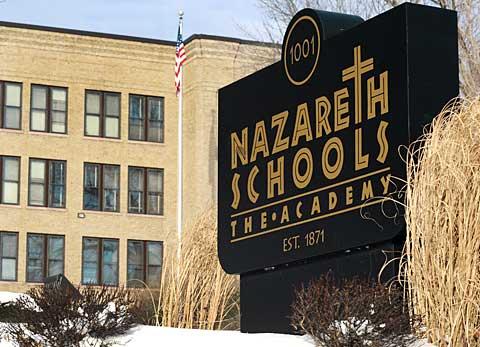 The Nazareth Schools, which have comprised Nazareth Academy and Nazareth Hall, will merge with Aquinas Institute by September 2010.

Carol Culligan of Rochester twice received a bouquet of a dozen roses during Nazareth Academy’s graduation.

The first time was in 1947, when Culligan graduated.

The second time was 1989 when the last of her eight daughters graduated from Nazareth Academy, and Culligan was honored for putting all of them through the school. Many women in Culligan’s family have attended Nazareth Academy during the school’s 139-year history.

That’s why Culligan was saddened to hear that family members would not have that option in the future. On Feb. 3 officials from the all-girls school and the coeducational Aquinas Institute announced that the two schools would merge to create a new coeducational Catholic school system for students from preschool to high school.

Nazareth Academy and Aquinas Institute are both private Catholic high schools that are affiliated with, but independent of, the Diocese of Rochester. The Sisters of St. Joseph sponsors the Nazareth Schools, which have comprised Nazareth Academy, an all-girls Catholic high school of grades 9 to 12, and Nazareth Hall, a coeducational preschool, elementary school and middle school for students through eighth grade. Aquinas, which was founded by the Basilian Fathers and is now run by a board of trustees, has been a coeducational junior high and high school for grades 7 to 12.

The announcement means the end of Nazareth Academy’s 139-year, single-sex educational tradition, but Culligan pointed out that it also may lead to growth.

"My granddaughter will be a senior in September," Culligan said. "I don’t know what her choice (of school) will be, but I think (the Nazareth-Aquinas partnership) does open the door to future enhancements if the merger is achieved in the way they say it’s going to be."

Other alumnae of Nazareth Academy reacted swiftly to the merger, with more than 1,000 people joining the "Save Naz Academy from Extinction" group on the social-networking Web site Facebook just hours after word leaked about the Feb. 3 announcement.

Evelyn Shepard, a 2009 Nazareth Academy graduate and one of the Facebook group’s administrators, said she and other administrators were in awe of the group’s quick growth.

"For me (the group) has been a really good support because people have been posting memories and how they are feeling," said Shepard, 18, a Rochester resident and freshman at Nazareth College.

Stephanie Brown of North Chili, a 2009 Nazareth Academy graduate who attends Carnegie Mellon University in Pittsburgh, said many alumnae knew enrollment was dropping and that the school might be in danger.

"It was really disappointing because we weren’t expecting it this soon," said Brown, a parishioner of St. Pius Tenth in Chili.

Maria Dolan, one of Carol Culligan’s granddaughters and a student at SUNY Geneseo, said her sister, a junior at Nazareth Academy, called her in tears with the news.

"I’m actually devastated about it," Dolan said. "I wanted my daughters to go there. Nazareth has always been a huge part of my family’s life."

Alumna Shannon Culligan, another of Carol Culligan’s granddaughters, explained that one reason the school inspires such loyalty is that it instills confidence in its students.

"I went to a coed elementary school," said Shannon Culligan, a freshman at SUNY Geneseo. "You feel like you have to fit in a stereotype of your gender. With all girls, it just made you be who you are."

Yet Carol Culligan noted the lessons that her family learned at Nazareth Academy will not be forgotten.

"I see the results of the ideals learned at Nazareth," Culligan said. "This heritage will go on. Thank you, Nazareth."

"We believe we can serve as a model in our community that a pre-K-through-12 private, Catholic education in Rochester is viable and long-lasting," Sister Mitchell said.

"There have been many changes in the Catholic school system over the years," said Aquinas President Michael R. Daley. "This new partnership is intended to strengthen that model."

The new school system would be called Aquinas Institute and Nazareth Schools. Prekindergarten through grade 6 will be located at the current Nazareth Academy building on Lake Avenue and the building will be called Nazareth Hall Elementary School. That building will become the feeder for the merged middle- and high-school grades, which will be located at the Aquinas Institute campus on Dewey Avenue.

Recently, Nazareth Schools announced the sale of its Raines Park building — where the Nazareth Hall prekindergarten and elementary grades have been located — to the new University Preparatory Charter School. At the time of the announcement, Nazareth officials said they planned to consolidate the school’s prekindergarten-through-12th-grade program at the Lake Avenue building.

Daley said Aquinas has enough space to accommodate all of Nazareth’s current seventh- through 12th-graders, if they all opt to attend Aquinas, and that the school will renovate if necessary. He added that the Nazareth girls would be able to enroll in college-level courses at Aquinas and also could take advantage of the school’s recent facilities upgrades, the cost of which has totaled $20 million over the past eight years. The upgrades include a fine arts center, stadium, student union, fitness center, library and auditorium.

Although the merged school will no longer be single sex, the Sisters of St. Joseph will staff a position at Aquinas that will be focused on women’s leadership and development. This fall the merged school will offer courses from Nazareth Academy’s science, technology, engineering and math (STEM) curriculum, including computer engineering and new technology. Other Nazareth Schools highlights expected to be maintained are the chamber orchestra, high-school and middle-school robotics teams and Perosian Choir, an all-female select vocal ensemble. Aquinas officials have said there will be additional opportunities for students in dance, arts, music and theater.

As of yet it is unclear how the merger will affect athletics at the high-school level, Daley said. Last year Nazareth Academy won a girls’ basketball state championship and four sectional titles. He predicted that combining the two schools’ strengths could benefit student athletes.

"We will have a wonderful opportunity to enhance the high-school (sports) experience," Daley said.

Also unclear is whether Nazareth Academy faculty or staff will lose jobs; that will depend on next year’s enrollment, Sister Mitchell said.

The merger will enable the new school system to minimize tuition increases, Daley noted. Tuition for 2010-11 will be $7,700 for high-schoolers, $5,450 for junior-high students, $5,050 for kindergarten through sixth grade, and $5,775 for preschool students. Aquinas tuition for the current school year was $7,500 for the high school and $5,250 for the junior high, whereas the Nazareth Schools tuition for the current year was $7,200 for the Academy, $4,800 for Nazareth Hall Middle and Elementary students and $5,500 for preschool students.

The Nazareth Schools and Aquinas also will merge their endowments, resulting in an $11 million endowment fund officials hope to increase to $25 million, Daley said. Scholarships committed to Nazareth Academy students will be maintained, Sister Mitchell noted.