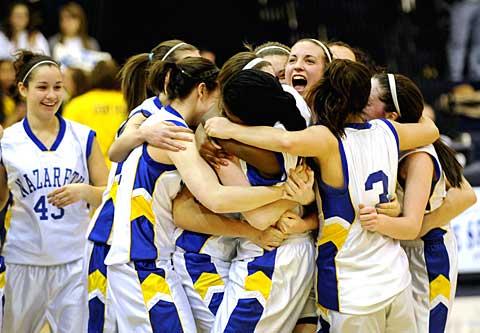 The well-oiled sports machine at Rochester’s Nazareth Academy has churned out Section 5 titles in five different sports over the last three years. That’s quite an about-face for a program that didn’t win its first championship until 1999, 17 years after joining Section 5.

For that matter, the turnaround is downright amazing when you consider that the school never even won a sectional game in any sport until 1997.

Leading this assembly line of success is the Laser basketball program, which has earned nine Section 5 crowns in the past 12 seasons — the latest resulting from a 60-50 win over Wellsville in the Class B final on March 5. In recent years most of Nazareth’s other team sports have gained sectional titles as well: volleyball in 2000, 2007, 2008 and 2009; bowling in 2006, 2007 and 2009; softball in 2007; and soccer in 2008. Nazareth athletes have added individual sectional titles in track and field, cross-country and golf along the way.

Despite this factory of championships, production is shutting down through no fault of the athletes or coaches. The Laser athletic program will cease to exist this June, when Nazareth Academy ends its 140-year tenure as an all-girls’ high school. Nazareth’s school system is consolidating with Rochester’s Aquinas Institute beginning in the 2010-11 school year, in a move that was first announced in early February 2010.

Thus, at the same time Nazareth was earning a basketball title it won’t have a chance to defend, team members other than seniors were scrambling to register at other area high schools.

"It’s sad for anyone. It’s just devastating — for the students, faculty, staff, everyone involved. It’s really hard to realize that it’s actually happening," said Chris Belmont, head coach of the Lasers’ basketball team and school athletic director. He said he felt fortunate to have recently landed a new job, as director of student affairs at Bishop Kearney High School.

Belmont admired his players’ ability to focus on the task at hand despite this potential distraction.

"The kids come to practice and focus for two hours. You’ve got to give them credit," he said.

Overall dedication of this sort has made the difference in boosting Nazareth’s athletic program to a high level of respectability, he added.

"A lot of it has to do with the same coaching staff, with stability," said Belmont, noting that several coaches have logged lengthy tenures with the Lasers. "The kids’ commitment is probably mirrored by the coaches’ commitment. They see a coach puts his time in and they want to do the same."

This perseverance has helped offset a lack of ideal practice and playing facilities. Because Nazareth Academy does not have on-site athletic fields, it’s always been necessary to rent facilities elsewhere. And as the basketball program has grown, home contests have been moved to larger venues in recent years rather than the school’s tiny, antiquated gymnasium, thus taking away any sense of a true home-court advantage.

"You do what you have to do," Belmont said. "The only home games are in volleyball."

Belmont has been the architect for Nazareth’s success after taking over the basketball program in 1993 and becoming athletic director in 1995. He won his 300th varsity game with Nazareth in this year’s sectional quarterfinals, having entered the tournament with a 360-148 career record over 23 seasons — six at Marshall (61-46) and 17 at Nazareth (299-102). Among the many coaching honors he has received, Belmont was named state Class C Coach of the Year in 2009.

Last season also marked the school’s crowning athletic achievement. By earning the state Class C basketball title, that feat goes down as the only state championship in Nazareth’s lengthy history.

Despite so much success during his tenure, Belmont shies away from taking individual credit for the athletic program’s rise from obscurity to a powerhouse.

"It’s a great accomplishment to go from not ever winning a sectional contest to winning some titles among the way. The credit goes to the coaches, the athletes and the administration at Nazareth Academy," he said.