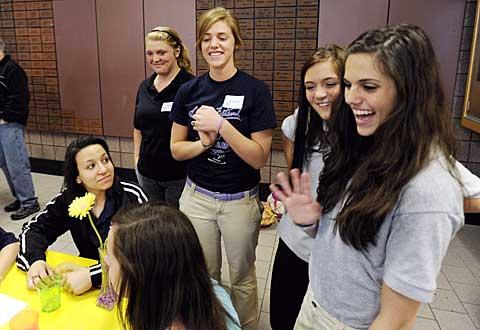 That was one question being debated by Nazareth Academy juniors during a June 9 cupcake reception at Aquinas, where the students in attendance have decided to spend their senior year.

The Nazareth Schools had comprised Nazareth Academy, an all-girls Catholic high school of grades 9 to 12, as well as Nazareth Hall, a coeducational preschool, elementary school and middle school for students through eighth grade. Before the affiliation, Aquinas Institute, which had been founded by Basilian priests and is now run by a board of trustees, was a coeducational junior high and high school for grades 7 to 12.

The move effectively ends the legacy of single-sex education at Nazareth Academy.

In trying to predict what changes might happen at Aquinas or within, the former Nazareth students first defined what set them and their school apart. They mentioned unique traditions: Nazareth class rings that are immediately recognizable to other alumnae; graduates in white dresses carrying red roses; the schools’ mentoring relationships between big and little "sisters"; annual rites of passage; and a host of senior privileges such as being allowed to come to school later and leave earlier.

They also noted the presence of unique personalities: Several said the small school and the all-female atmosphere helped them to become confident, proud and not preoccupied with trying to impress males.

"In single-gender education, you don’t have to worry about raising your hands and answering a question," said Gabrielle Sereika of Rochester, 17, who will be a senior at Aquinas next school year.

She noted that she doesn’t know what Aquinas classrooms will be like, but she said she feels confident that she and her fellow classmates can handle any situation.

"We’re not going to just sit down and let things happen," Gabrielle said. "We don’t just go with the flow of things."

Others said they had found Nazareth Academy to be diverse — a legacy of generous scholarships enabled the Sisters of St. Joseph to offer Catholic education to people of varying economic backgrounds — yet unified due to its small size.

"I do consider every single person at Nazareth my family," said Jasmine Cooper of Churchville, 16, a junior.

And now that family is moving on. Former academy students said they went through anguishing moments over the past few months as they interviewed and shadowed students at various schools they considered attending. Amid such visits, some said they were simultaneously still processing the fact that they wouldn’t be able to return to Nazareth Academy in the fall.

"I think I realized change is going to happen, whether I like it or not," said 16-year-old Jasmine Glaspy, who will be attending Aquinas next year.

After the initial shock of the academy’s closing wore off, she said she eventually found herself getting used to the idea of a new school. Yet she said it will be strange to be in classes with guys again — an aspect of education she hasn’t experienced since the eighth grade. Another adjustment will be a new slate of teachers.

"I think the thing I’m going to miss most are the teachers, because they definitely made the school," Jasmine said.

She said some of her classmates will be joining her at Aquinas, while others will be going to the all-female Our Lady of Mercy High School in Brighton, the coeducational Bishop Kearney High School in Irondequoit or to public high schools. Some former academy students have opted to join a program that will allow them to enter college early and complete their senior years of high school there, she said.

Other former academy students said that atmosphere had been a big factor in choosing which school to attend. Amanda DiPonzio of Greece, a 16-year-old who will be a senior next year, said she went back and forth between Bishop Kearney and Our Lady of Mercy before opting for Kearney.

"It felt a lot like the Nazareth family atmosphere," Amanda said, noting that former Nazareth students have met with Kearney officials to discuss ways that academy traditions could be incorporated into their new school.

Although she has been looking to the future, Amanda noted that the impending separation did cast a shadow over the end of the school year.

"Definitely, it’s been depressing," she said. "On the last day of school, we had a field day and moving up ceremony, and during the last half hour, we met around the flag pole and we had a prayer service. That’s when it hit everybody."

"I’m kind of excited for a chance to meet new people," she added.

Morgan Barron-Bozman, 14, will be a sophomore next year at Our Lady of Mercy. Having also attended the coeducational Nazareth Hall, she recalled having to make a big adjustment at the beginning of her freshman year to the all-girls environment at Nazareth Academy. Not long after she became very close to her new classmates, they were struck by the news that their school was closing, she said.

"It was a hard transition," Morgan said. "I didn’t like the fact that I had to go to a new school, but it’s helping me learn more about myself and the people I want to surround myself with."

This year, academy freshmen and sophomores were allowed to purchase Nazareth Academy rings as mementos of their time at the school, and alumnae organized a fundraising effort to provide rings for any freshmen and sophomores who could not afford them. Morgan said receiving her class ring was bittersweet; she was excited about the ring, but it also is a reminder that she isn’t able to graduate from Nazareth.

"I know (the school) will always occupy a special place in my heart," she said. "My ring symbolizes that ‘once a Naz girl, always a Naz girl.’"

On the other hand, Morgan said she is looking forward to making new friends and that she chose Our Lady of Mercy because she felt welcomed by its atmosphere.