NBC series 'This Is Us' proves to be refreshingly pro-life, pro-family - Catholic Courier 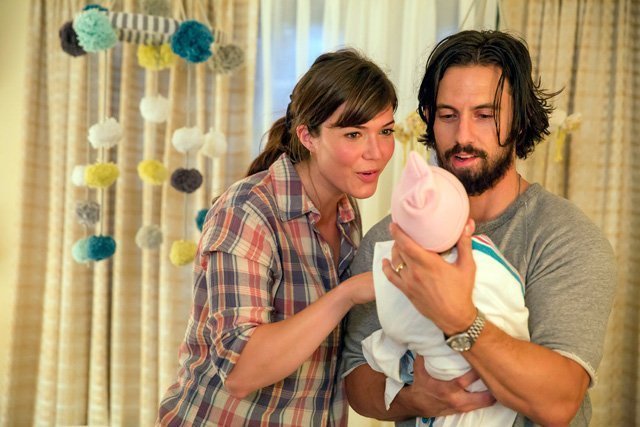 Mandy Moore and Milo Ventimiglia star in a scene from the NBC drama "This Is Us." Since its Sept. 20 premiere, the series, which airs Tuesdays 9-10 p.m. EST, has proven to be refreshingly pro-life, pro-family and pro-adoption.

NEW YORK (CNS) — The pilot episode of NBC’s drama “This Is Us” featured an eye-catching first scene. Pregnant with triplets, Rebecca Pearson (Mandy Moore) celebrated husband Jack’s (Milo Ventimiglia) 36th birthday by dancing suggestively for him, while he lay on their bed, wearing only a towel.

Viewers shouldn’t let that provocative moment mislead them, however. Since its Sept. 20 premiere, the series, which airs Tuesdays 9-10 p.m. EST, has proven to be refreshingly pro-life, pro-family and pro-adoption. While it certainly can’t be recommended for all ages, mature TV fans will likely see through to the positive underlying values.

Warmly avuncular McRaney makes a lasting impression through scenes like the one in which he counseled the new father after one of the triplets didn’t survive birth.

In keeping with Katowsky’s philosophy: “When life gives you the sourest lemons, make something resembling lemonade,” Jack and Rebecca decided on a radical step. On the same day their twins were born, a firefighter dropped off an abandoned African-American boy at the maternity ward. Wanting to fill the void left by the loss of their child, Jack and Rebecca adopted the baby.

“This Is Us” explores how people’s bonds are tested — and can become frayed over the years. When viewers first encounter the Pearsons’ adult children on their 36th birthdays, twins Kevin (Justin Hartley) and Kate (Chrissy Metz) both live in Los Angeles.

Paid $3 million a year to star in a vapid sitcom, “The Manny,” Kevin wants to escape his unfulfilling role as a male au pair. Kate, who is Kevin’s executive assistant, struggles with a different problem: her obesity.

Viewers will admire the show’s ambitious plot lines, which shift seamlessly from contemporary scenes to flashbacks of the Pearsons’ family life when the siblings were children. We discover ancient issues that still shape family dynamics today from mother to daughter and brother to brother. And the ties between some family members create conflicts among others.

For instance, as a child, Kevin was envious of the special closeness shared by Rebecca and Randall. The audience already understand the role William played in helping Rebecca connect with her adopted son. Later revelations, however, hold the potential to devastate Randall.

The way “This Is Us” affirms family life is what ultimately recommends it to viewers. Coming together in an improvised way, the Pearson clan is still evolving.

“This Is Us” is strictly for adults however. There’s strong sexual content as well as alcohol and drug use.

Although the characters’ mom-liked-you-more petulance sometimes grates, viewers will warm to “This Is Us” thanks to its tender, sweet moments.