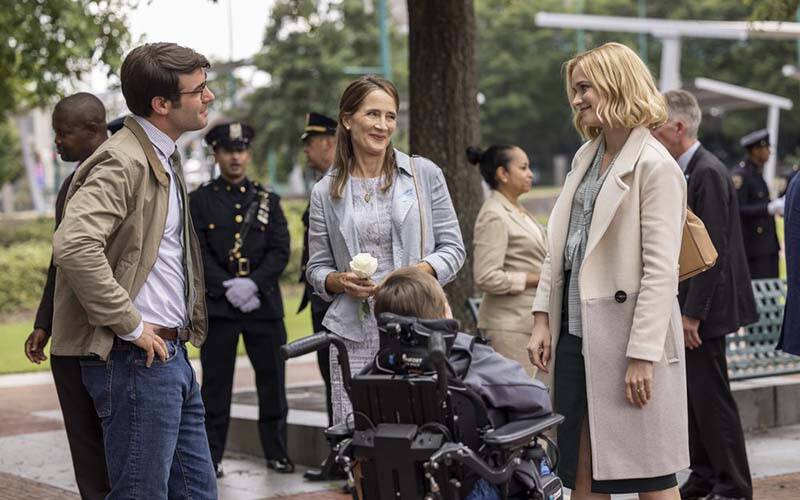 NEW YORK (CNS) — Fans of independent films may recall the 1998 movie “Sliding Doors,” which starred Gwyneth Paltrow. Its plot spins out alternative futures for her character, a young London woman, depending on whether she succeeds or fails to catch a particular subway train before it leaves her station.

The NBC series “Ordinary Joe” borrows liberally from the same concept. Overly plotted but imbued with a likable spirit, the drama is airing Mondays 10-11 p.m. EDT and will remain in that time slot throughout its 13-week run.

Upping the ante on Paltrow’s situation, Friend, Lerner and the series’ other writers imagine three possible life paths for the titular figure, Joe Kimbreau (James Wolk), whom viewers first meet as he’s running late for his 2011 graduation from Syracuse University. The options before him include two wives and a trio of professions.

The varied results are viewed on the eve of Joe’s 10th reunion. The first scenario finds him married to Amy Kindelan (Natalie Martinez), a politically ambitious Latina.

In this iteration, Joe has achieved his goal of becoming “the next Billy Joel.” But the glamorous lifestyle he and Amy share fails to compensate for the personal troubles by which they’re beset, principally their frustrated efforts to start a family.

Having recently miscarried twins, Amy decides to run for Congress after her boss, Bobby Diaz (Adam Rodriguez), bows out of the race because he’s been diagnosed with Parkinson’s disease. This upsets Joe because he fears Amy will stop trying to get pregnant.

In his second future, Joe is married to his best friend-turned-love-interest, Jenny Banks (Elizabeth Lail), his class’s valedictorian. But the two are on the verge of divorce.

Joe is a hardworking nurse rather than a celebrated singer-songwriter. He and Jenny have a son, Christopher (John Gluck), who suffers from spinal muscular atrophy. Joe takes extra shifts to pay for the expensive care Christopher requires and his extended absences from home have become a source of marital tension.

In the third reality, Joe has heeded the wishes of his Uncle Frank (David Warshofsky) and followed in the footsteps of both his father and brother — the latter a fallen hero of the 9/11 attacks — by joining the NYPD. He reunites with Amy after saving Bobby from an assassin’s bullet.

At the reunion, Joe not only reconnects with Amy, he also crosses paths with Jenny. She’s the single mother of a disabled son named Lucas (also Gluck).

With only the pilot available for review, it’s hard to evaluate the show’s suitability for various age groups. In addition to the mature topics already mentioned, the program also includes some mild violence. So far, there’s no explicit sexual content or crude language, but that could change. As a result, parents may want to wait before giving the green light to teens.

Viewers of faith will find some gratifying material in “Ordinary Joe,” including its affirming portrait of persons with disabilities. In fact, Gluck’s gentle, sincere performance in his dual role is nothing short of winsome. The sympathetic view of adoption presented in the series is another asset.

The show is less successful, however, when considered on a strictly artistic level. The way the action rapidly shifts between Joe’s assorted realities, for instance, produces a whipsaw effect. Nor does the logic of his miscellaneous situations always bear scrutiny.

To enjoy his competing fates to the full, accordingly, viewers will need to relax, give into the underlying conceit, and just go with “Ordinary Joe.”