NCAA championship is a win-win for Catholic universities - Catholic Courier 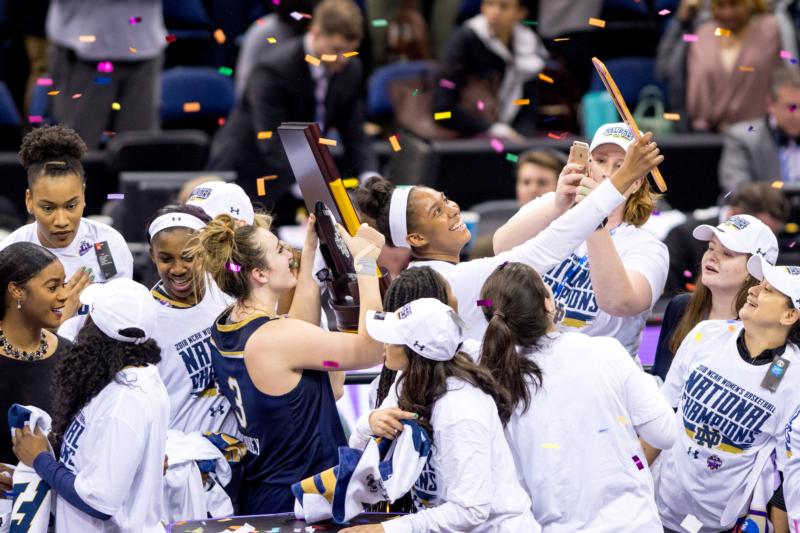 Members of the Notre Dame women's basketball team celebrate after defeating Mississippi State 61-58 April 1 in the championship game of the Final Four of the NCAA Tournament in Columbus, Ohio. It was the second time Notre Dame's women have won the title. (CNS photo by Matt Cashore/courtesy University of Notre Dame) 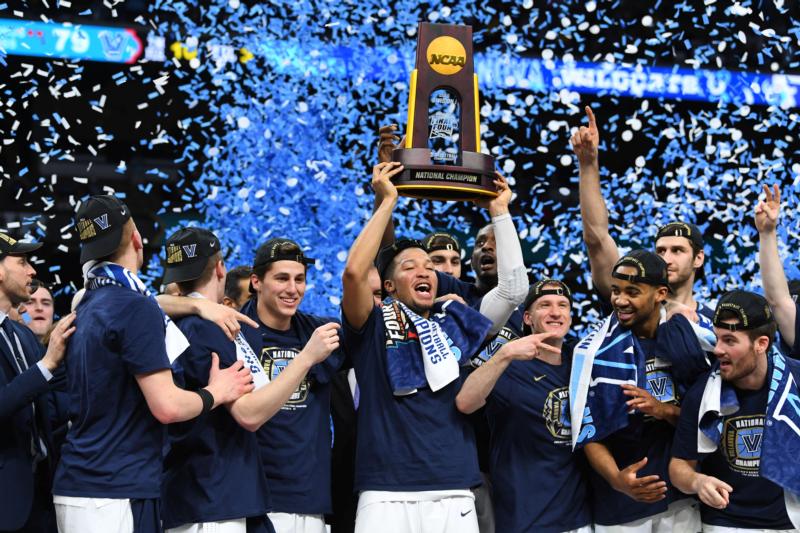 WASHINGTON (CNS) — This year’s NCAA basketball tournament was one for the books for Catholic universities. You might even say the ball was in their court.

That’s because for the first time, Catholic university teams won both the men’s and women’s national championship games. The women’s team, the Fighting Irish from the University of Notre Dame, beat Mississippi State University on Easter 61-58, thanks to Arike Ogunbowale’s dramatic, three-point shot with less than one second left on the clock.

The next night, the Wildcats, the men’s basketball team from Villanova University, beat the University of Michigan 79-62, winning their second national title in three years.

And it wasn’t just the final matchups where Catholic colleges dominated. For the men’s teams, half of the No. 1 seeds in the 2018 tournament were Catholic teams, as were eight of the 64 teams in the bracket.

And of course, the media darling during much of March Madness was 98-year-old Sister Jean Dolores Schmidt, the retired Sister of Charity of the Blessed Virgin Mary and chaplain of the Ramblers, the men’s basketball team from Loyola University Chicago.

The woman religious, whose image was on socks and bobblehead dolls, personally encouraged players and cheered on the team at the sidelines up to its final 69-57 loss to Michigan in the March 31 semifinals.

The victories for the Notre Dame women and Villanova men is not a first for either squad, but it is a first for two Catholic university teams to win both championships in the same year, according to Paula Moore, vice president of external affairs for the Association of Catholic Colleges and Universities based in Washington.

She pointed out that the NCAA Women’s Division I tournament didn’t begin until 1982 and since then, Notre Dame has been the only Catholic team to take the championship, which they first did in 2001, the year Duke University was the winning men’s team.

Augustinian Father Rob Hagan, who is chaplain of the Villanova men’s team, was a student at the university when the Wildcats won the 1985 championship. He called it “one of the great memories of my life.”

Being the team’s chaplain is “one of the great joys of my priesthood,” he told Catholic News Service a few days before the championship game.

“It’s a wonderful opportunity to minister,” he said. The joy of serving the team, he noted, comes in seeing “these student athletes just simply do their best and discover gifts within themselves and how they help each other get stronger.”

Father Hagan also said that he sees all the media coverage on hoops chaplains this championship as a “hunger and thirst for something deeper.”

Donte DiVincenzo, a sophomore reserve guard who scored 31 points on 10-for-15 shooting from the field, including 5 of 7 from three-point range, attended Salesianum School in Wilmington, Delaware, run by the Oblates of St. Francis de Sales. He was named most outstanding player of the Final Four in this year’s NCAA tournament.

Neumann-Goretti High School product Dhamir Cosby-Roundtree, also a freshman, contributed limited time in which he grabbed a rebound. Other key players hailed from Catholic, private or public schools from Delaware, Maryland, New Jersey and New York, plus star guard Jalen Brunson, who is from Illinois.

Catholic universities in this NCAA tournament and previous matchups is no long shot. A New York Times article in late March, “Why Catholic Colleges Excel at Basketball,” points out that the history of men’s basketball teams’ success at Catholic colleges has been as long as the tournament itself, which started in 1939.

The Catholic basketball dominance is in sharp contrast to its football performances, where only Boston College and Notre Dame have powerhouse teams.

But whatever got them started, these universities have kept the ball rolling so to speak.

Augustinian Father Peter Donohue, president of Villanova, said in a letter to the school community on the university’s website after the men’s win: “If you had told me two years ago that we would be celebrating another national championship today, I honestly don’t know that I would have believed you. In 2016, it had been 31 years since our last national championship for basketball, and now, just two years later, Villanova is once again the national champion!”

He said that in the days leading up to the Final Four, he had frequently been asked about how the team embodies the school’s spirit, a question he was sure other teams’ college and university presidents weren’t asked.

His answer tied the team’s success with the Catholic view of the importance of community, noting that the players often give credit to their opponents, teammates and coaches, “always placing the team before the individual.”

Matthew Gambino and Matthew Davis contributed to this story.