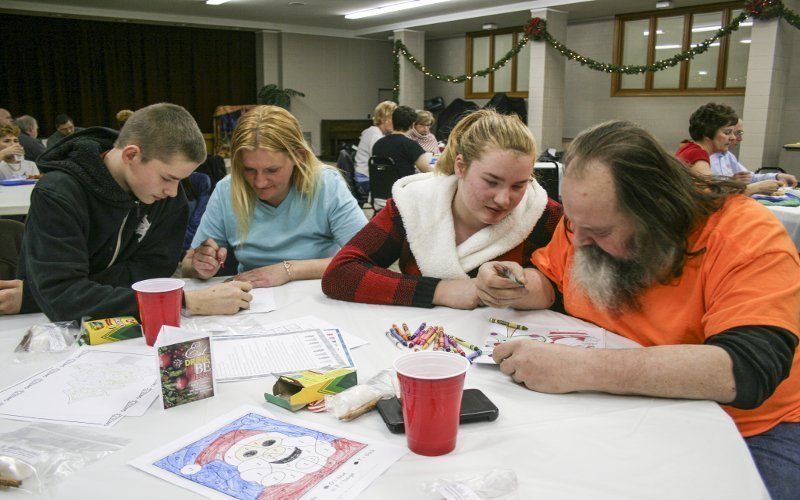 Christian Inman (left) plays a game with his mother, Tracy Inman, while his sister, Katelyn, colors with their father, Jimmy Inman, at the CrossOver Prison Ministries’ Holiday Party at First Christian Church in Omaha, Neb., Dec. 5.

OMAHA, Neb. — The letter of gratitude, addressed to the volunteers at CrossOver Prison Ministries of Omaha, arrived in late November in the ministry’s post office box.

The letter, from an inmate, said in part: “Just seeing somebody write my name down on a card to wish me a blessed holiday for Thanksgiving and Christmas means a lot to me in this time of need.”

The note was one of dozens from inmates, most of them addressed to specific, anonymous pen pal volunteers working with CrossOver through state prisons and correctional centers in Nebraska.

“That’s what keeps us keeping on. Any one of them like this, I share it with the (volunteers),” said La Verne Belt, a member of New Life Presbyterian Church in Omaha, team leader of the group’s pen pal volunteers. Belt helped establish the Christian-based, nondenominational nonprofit organization in 2005.

The volunteers’ correspondence is not confined to Thanksgiving and Christmas.

More than 20 volunteers, many of them Catholic, write letters or postcards to three or more prisoners once or twice each month. They share notes and cards for Easter and birthdays. They write letters of goodwill and good luck during and after parole hearings, reviews and release dates. They even send free study Bibles and a monthly newsletter with inmate art and poetry.

Mark Boyer remembers how grateful he felt for the letters he received when he was in prison for a year, about a decade ago, after multiple violations of driving while intoxicated.

“It was the only mail I got and it made my day,” Boyer said.

Now a chef and member of First Christian Church in Omaha, where CrossOver meets, Boyer is a member of the ministry’s board. His wife also helps with correspondence.

Learning more about CrossOver after his 2007 release, Boyer joined the group, which in 2011 merged with Family &amp; Friends of Inmates of Omaha, bringing a number of Catholics into the organization.

The Catholic community continues to contribute, including Janet Murnan, a member of St. Columbkille Parish in Papillion. She began writing letters to three inmates more than a year ago, after seeing a bulletin announcement while attending Mass at Christ the King Church in Omaha.

Recently retired, she was inspired by Pope Francis’ 2016 Year of Mercy and was looking for ways to help others. She placed the announcement on her desk at home, where it stayed for about a week.

“Probably it was the Holy Spirit,” Murnan said of her returning time and again to that blurb in the bulletin. “It was calling my name. I do like writing letters and this is the kind of thing not a lot of people would do.”

Surely, more volunteers are needed. Some write to as many as nine inmates at a time; three is more common. About 90 inmates currently receive letters, but there often is a waiting list of more than 20 inmates.

To participate, inmates must have attended a Christian prayer service in prison or taken other steps toward faith. They also must request correspondence with CrossOver.

While many people believe inmates are receiving what they deserve, the volunteer letter writers understand that their work advances a corporal work of mercy: visiting the imprisoned. Letter writers don’t tout one religion over another, but they do try to share hope and spread the faith, Murnan said.

“We talk about the new evangelization. Here is a captive audience of more than 2 million people (incarcerated nationwide) who will save your letters forever and read and reread them,” Murnan explained.

“If they don’t get any mail, nobody writes their name down, it’s like they’ve lost their identity,” she said. “So to get a piece of mail ‚Ä¶ it’s like ‘I still exist. I’m somebody.’”

Murnan prays before she writes and again as she mails her letters. She listens for Bible verses or other inspiring words to share, and she often places a holy card into each envelope.

“I ask the Holy Spirit to guide my thoughts and tell them what they need to hear,” Murnan said.

“I firmly believe in evangelization,” she added. “You have to speak up. You have to say something. You can’t just take yourself to church every week and not tell anybody about it.”

The ministry also hosts an annual holiday party, which some inmates get permission to attend. Tracy Inman of Omaha attended CrossOver’s party Dec. 5 and had the chance to celebrate Christmas with her husband, Jimmy; son, Christian; and daughter, Katelyn.

On work release with six months left of a year-long sentence for theft by receiving, Inman has been receiving letters from volunteers during her incarceration.

“This is especially special to me because I get to have my family here,” she said of the opportunity to play games and color pictures with her family.

About 50 people came, a mix of volunteers, inmates on work release, mothers, fathers and children. Organized for the families of inmates, the party included gifts for the children, a meal of spaghetti, salad, garlic bread and desert, a visit from Santa and Mrs. Claus, games and music.

Inman said she appreciates receiving the correspondence from the volunteers.

“It makes you feel there are people out there who care,” she said. “You’re not just stuck in a cell somewhere alone.”