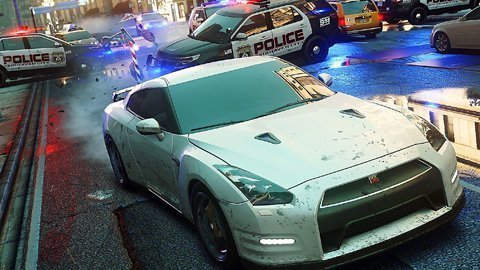 NEW YORK (CNS) — The street racing fad has been a part of popular entertainment in one way or another for more than a decade, starting in the movie world with the 2001’s "The Fast and the Furious" and in the video game realm with the "Burnout" series that started the same year.

Having showcased the underground racing world before, the long-running "Need for Speed" franchise features the illicit pursuit again in its latest release "Need for Speed: Most Wanted" (Electronic Arts) — a reboot of the 2005 game of the same name. This latest gambit brings a lot to the table, and not just because the game is a visually smooth, open-world title that purrs like a Ferrari fresh out of the showroom.

Gamers of faith will be pleased to find that this entry rejects the foul language, fist fighting and exploitative presentation of women that so often characterize the street-racing scene.

The player is a rookie driver making his way through the racing underworld in the fictional city of Fairhaven — an urban setting the gamer can freely traverse and explore. By "jack-spotting" different cars — a method of collecting unmanned vehicles from the street — the player makes new races accessible for the fictional protagonist.

Successful gamers earn enough points to win a place among the top 10 "most wanted" speed-demons, provided, of course, that they also manage to evade the long arm of the law in the process.

While free of truly offensive content, the title is not without its moral problems. The most obvious of these are the illegal and reckless racing in which gamers participate, as well as the theft by which gameplay is extended.

Additionally, the way to beat the "most wanted" drivers is not only to match them in speed but to smash into their vehicles and drive them off the road so that they crash. Since there are no human characters in the game, players are not shown the full consequences of such behavior. Thus a player who careens into an oncoming SUV will see nothing of the horror that a real-life car crash entails, as the vehicle merely "re-spawns" and returns to the road with a delay of only a few seconds.

Such content may be acceptable for mature, morally well-grounded gearheads — those fully conversant with the fact that obedience to the Fifth Commandment includes the obligation to avoid putting either our own lives or those of others at risk.

Younger, more impressionable audiences, by contrast, may not entirely appreciate the evil involved in any attempt to mimic in the real world the actions portrayed on screen.

The game contains pervasive vehicular violence, destructive behavior and fleeting innuendo. The Catholic News Service classification is A-III — adults. The Entertainment Software Rating Board rating is E10+ — Everyone 10 and older.