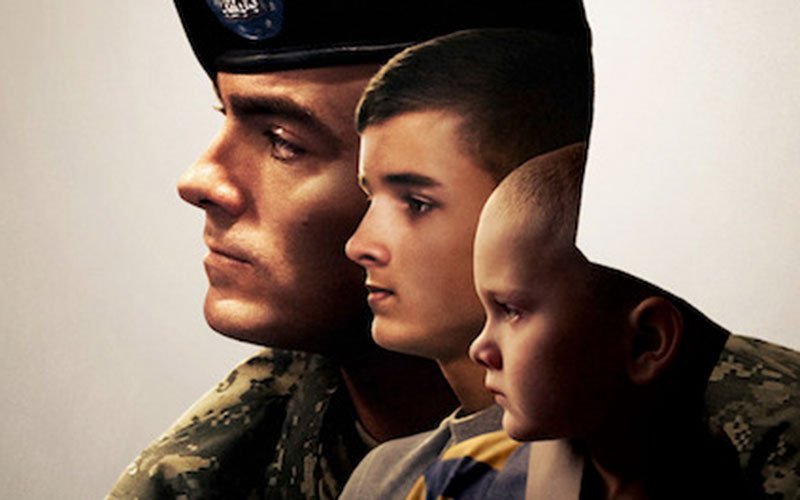 This is the TV poster for the documentary "Father Soldier Son" streaming on Netflix. (CNS photo courtesy of Netflix)

NEW YORK (CNS) — As many may find it convenient to forget, the United States has been waging war in Afghanistan for nearly 19 years. And it is military families that have, of course, in President Barack Obama’s words, “borne the heaviest of all burdens” in the conflict.

Journalists Catrin Einhorn and Leslye Davis directed and helped produce the movie. A decadelong project of The New York Times, it examines the war’s impact on two generations.

The filmmakers use a cinema verite approach to explore the lives of Brian Eisch of Wautoma, Wisconsin, and his sons, Isaac and Joey. A divorced single dad, Brian comments: “It’s easier being a platoon sergeant than raising two boys by yourself.”

Deployed to Kunduz as part of the surge of 30,000 troops ordered by Obama in 2010, Brian suffers a leg wound while ministering to an Afghan comrade injured by a grenade.

Isaac, 11, tries to grasp how the assault on his dad came from “a real bullet from a real person with a real gun.” Seven-year-old Joey’s reaction is, naturally, more visceral: “You shoot my dad,” he says, “I kill you.”

The event irrevocably alters the family’s future. His 17-year military career over, Brian eventually finds the pain in his leg intolerable. In 2014, he has it amputated.

As Brian adjusts to using a prosthetic limb, he finds new love with Maria, a divorced woman with sons of her own whom he marries in 2015. With her encouragement, he also starts a new business. Yet, despite these developments, Brian slips gradually but palpably into darkness.

As the boys wrestle with their father’s military legacy and the lure of life in the Army, further tragedy awaits the Eischs.

Besides the violence and mature themes integral to its story, “Father Soldier Son” includes some vulgar talk, though this does not seem gratuitous. Too intense for kids, the documentary is suitable for adults and may be of value to older adolescents as well.

A meditation on war’s physical and psychological costs, the film challenges viewers to contemplate why so few must sacrifice so much for so long to preserve our freedom. Enhanced by Nathan Halpern’s hauntingly elegiac musical score and Davis and Marcus Yam’s sumptuous and striking cinematography, “Father Soldier Son” registers as a remarkable achievement.