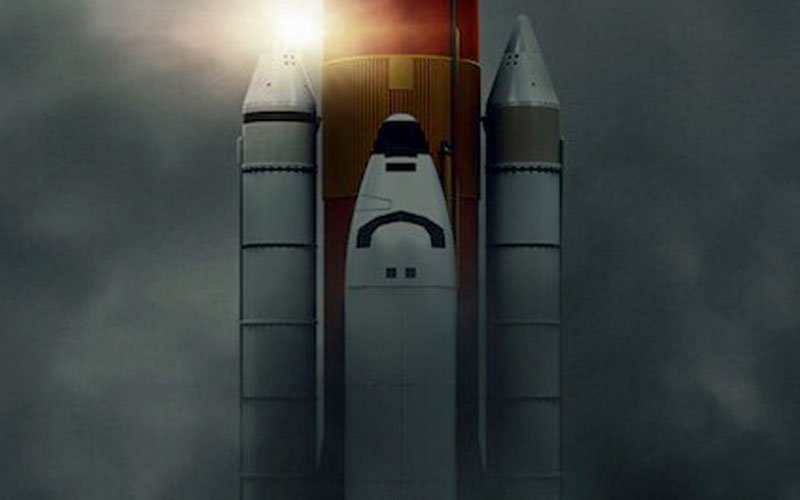 This is the TV poster for "Challenger: The Final Flight" streaming on Netflix. (CNS photo courtesy Netflix)

Quoting the aviator and poet John Magee, he said of them: “They … slipped the surly bonds of earth to touch the face of God.”

“Challenger: The Final Flight,” a docuseries recalling both the tragedy and the subsequent investigation into what went wrong, has its moments. But it isn’t nearly as impactful as the 40th president’s brief talk. Its four one-hour segments are streaming now on Netflix.

Occasional off-color language aside, the program includes nothing objectionable. Too emotionally intense for younger children, the show is suitable for adults and teens.

Created by Steven Leckart and Glen Zipper, the series begins with an image younger viewers may initially find quaint. In a reenactment, students in a classroom are gathered around a 19-inch color analog TV set.

They’re attentively watching the Challenger’s ill-fated launch from Cape Canaveral’s Kennedy Space Center because one of its crew is Christa McAuliffe, a 37-year-old social studies teacher from New Hampshire. The wife and mother of two had been selected from a pool of 11,000 applicants and 10 finalists vying to become the first civilian astronaut.

As her younger sister, Lisa Bristol, recalls, Christa “believed she could do extraordinary things. But she believed everybody could.”

The Reagan administration’s drive to recruit a teacher for NASA was intended to counter the increasingly nonchalant attitude the public was perceived to have fallen into with regard to space travel. “A common, ordinary citizen” on the Challenger, “takes some of the mystique away of the old astronaut tradition,” says a television reporter covering the launch.

As the filmmakers point out, the overall diversity of the Challenger’s crew demonstrated how NASA had changed for the better in the 1970s. Three African Americans, one Asian American and six women were part of NASA’s 1978 astronaut class — four of whom were aboard the Challenger.

As the documentarians also observe, however, such a positive development could only temporarily mask the grave technical issues involving the shuttle’s solid rocket booster system that would ultimately cause its catastrophic loss.

Engineers at Thiokol, the company that designed the booster, had identified a crucial flaw that precluded the spacecraft from flying when temperatures fell below 53 degrees Fahrenheit. Yet, under pressure from NASA, the Utah-based corporation signed off on letting the January launch proceed. It did so — despite the icicles clinging to the 250,000-pound aircraft.

In the aftermath of the disaster, Reagan appointed a commission, headed by former Secretary of State William P. Rogers, to explore what went awry. The president, the documentary reveals, was anxious to avoid embarrassing NASA.

If that was the goal, the appointment of Nobel Prize-winning physicist Richard Feynman to the board effectively undermined it. His experiments confirmed the design defect that precipitated the calamity.

NASA’s hubris — manifested in the belief that, in the words of one commentator, “this is so safe we could put schoolteachers on it” — was largely responsible, the filmmakers convincingly argue, for what New York Times journalist David E. Sanger characterizes as “the manslaughter” of the Challenger astronauts.

The producers’ willingness to uncover the truth is admirable. They also show wisdom in recognizing that those most directly affected by the events are the ones best positioned to tell the story. Thus we hear from astronauts, Thiokol engineers, NASA officials and relatives of the crew.

Yet the film’s emphasis on technical issues frequently overshadows its human-interest narratives. Viewers may, for example, hear more about O rings than they really care to. Those who stick it out to the final episode, however, will be rewarded with a renewed focus on the people involved in this sad chapter of history.

This last installment also features an observation that will resonate with those committed to Gospel values. June Scobee Rodgers, widow of the Challenger’s commander, Dick Scobee, says of those whose negligence led to her husband’s death: “We need to forgive those people. We need to move on.”