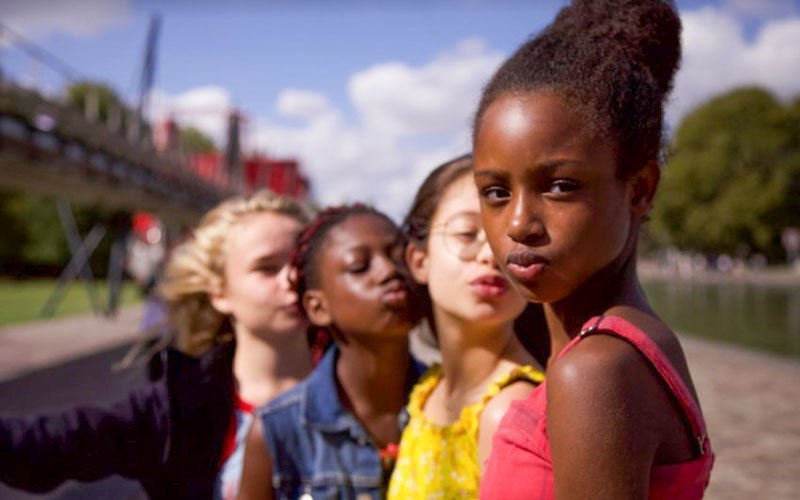 This is a scene from the movie "Cuties" streaming on Netflix. (CNS photo courtesy Netflix)

NEW YORK (CNS) — Controversy has surrounded the airing on Netflix of the French film “Cuties” (“Mignonnes”).

There have been numerous accusations that the movie sexually exploits the preteen members of its cast and the streaming service withdrew a provocative ad for “Cuties” saying that it did not properly represent the picture’s overall content.

Critics, on the other hand, have generally lauded “Cuties,” and — whether in spite of the dispute or because of it — the film immediately became one of the platform’s most popular offerings when it was released Sept. 9.

So, is this coming-of-age tale an aesthetically accomplished exploration of the immigrant experience in contemporary France or catnip for pedophiles?

A serious examination of writer-director Maimouna Doucoure’s debut work has to begin with the cultural significance and symbolism of clothes, specifically the attire of young women.

One of the first things we notice in the story of 11-year-old Amy (Fathia Youssouf Abdillahi), a Senegalese immigrant living in Paris, is the contrast between her initially modest clothing and the far less tasteful outfits sported by some of her schoolmates. This reflects the chasm between the Islamic values with which Amy is being instilled and the fast-and-loose mores of the secular West.

From the outset, Amy is fascinated with — and tempted by — the freedom and apparent maturity, sexual and otherwise, such garments represent. Their draw only increases after she befriends Angelica (Medina El Aidi), a neighbor who not only dresses revealingly but is part of the dance team from whose name “Cuties” takes its title.

Amy thus finds herself torn between the strict rules of her ethnic community and the freewheeling ways of the larger world around her. The result, predictably, is confusion.

She’s bored by religion and alienated from Muslim tradition by the news that her father, who has so far remained in their homeland, will soon arrive in France to celebrate his wedding to a second wife, a development that deeply pains her mother, Mariam (Maimouna Gueye). To add insult to injury, Mariam is expected to make some of the arrangements for the polygamous nuptials.

Just as the elaborate traditional dress Amy is to wear to her dad’s marriage — a gift he sends her in advance of his return — comes to symbolize one side of the cultural breach Amy is trying to jump, so the skimpy, tight-fitting costume she dons as a member of the dance troupe aptly stands for the other.

The moderate solution for which Amy eventually opts is laudable. But the depiction of her path toward it, and the crisis through which she passes along the way, is dubious to say the least.

Here it’s important to distinguish between subject and treatment. Doucoure’s chosen topic is both valid and valuable. As a French-Senegalese woman herself, moreover, she presumably brings personal experience to bear in telling Amy’s story. And if, as its supporters profess, the film is meant as a critique of the sexualization of young women in Western culture, all the better.

Yet, in conveying such a message via a predominantly visual medium, surely the utmost sensitivity and restraint would be considered not only prudent but essential. This is not, however, the approach viewers will find adopted in “Cuties.”

One need not be a pervert to notice, for instance, that, in several scenes, the camera sedulously follows behind the youthful characters’ behinds. Some of the moves they practice in their rehearsals are needlessly graphic as well.

But it’s their climactic performance that really sends things over the top. The innocence appropriate to childhood — and these actors are children — is ripped to shreds amid the kind of behavior that garners dollar bills from drunks yearning for lap dances. As for the costuming, it becomes, at moments, not only physically revealing but anatomically so.

All this is utterly gratuitous since any point about imposing adult sexuality at too early an age could have been made just as effectively without it. Viewers can sense behind such content the desire to provoke, to break taboos and to play a double game as old as any movie from the 1950s purporting to be a serious sociological study of life in a Swedish nudist camp.

Coming on the heels of last year’s “Good Boys,” in which a cast of kids was exploited in a different but undeniably outrageous way — in their case supposedly for laughs — “Cuties” may raise the issue of whether or not actors under a certain age should be protected from participating in certain media projects.

It is not an attack on free speech to say that little boys and sex toys should not be made to mix, as they did in the earlier feature, nor that 11-year-old girls should not be filmed cavorting like Vegas strippers.

Is “Cuties” really aimed at making precisely the latter point? Perhaps. But, if so, the filmmakers should have seen to it that their movie did not itself degenerate, by its later scenes, into an example of exactly what they set out to decry.