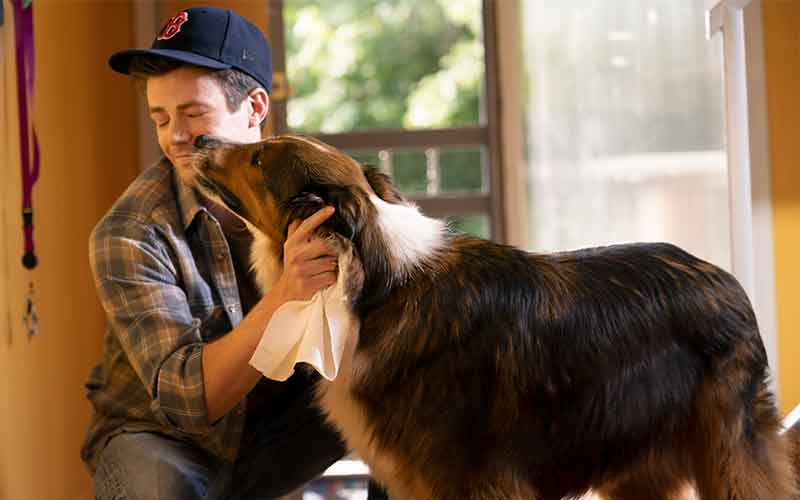 Grant Gustin stars in a scene from the TV show "Rescued by Ruby," streaming on Netflix. (CNS photo by Ricardo Hubbs/Netflix)

NEW YORK (CNS) — An ambitious lawman and a dog in danger become partners in the winsome fact-based drama “Rescued by Ruby.”

Helmed by Katt Shea, the director of 2019’s “Nancy Drew and the Hidden Staircase,” and written by Karen Janszen, the 90-minute film is streaming now on Netflix.

The picture opens on the plight of the titular border collie. As her strongest advocate, Warwick, Rhode Island, humane shelter volunteer Pat Inman (Camille Sullivan), works tirelessly to break rambunctious Ruby of her bad habits. But Pat knows that, should she fail, Ruby — who has already run through seven adoptive families — may have to be euthanized.

Meanwhile, in Wickford, state trooper Daniel O’Neil (Grant Gustin) is restricted to writing speeding tickets. Yet his dream job is to serve with the K-9 unit, a goal from which he’s been rebuffed several times. In a last-ditch effort to achieve his objective, Dan meets with the outfit’s chief, Matt Zarella (Scott Wolf).

Describing himself as “a fan, but a truth teller,” Matt tells hyperactive Dan, whose leg twitches throughout the interview, that “the K-9 team requires calm focus. You’re all over the place. You can’t even sit still.”

Pointing out that the purebred German shepherds the troopers normally employ cost $10,000 each, Matt offers Dan a deal: If Daniel can somehow come up with his own dog as a substitute, Matt promises to give the eager officer a chance to prove him wrong.

The upshot is the pairing of two equally hyperkinetic souls.

Dan and Ruby’s first attempt to complete the department’s training ends disastrously. But Dan determines to instruct his new friend on his own, and she dazzles in her next try, earning her master provisional status with the division.

“Rescued by Ruby” is rated TV-G — general audience. Yet it does include a number of mature themes, such as drug use and murder, that make it inappropriate for very young children.

There’s also a brief lapse into scatological humor as, while trying to housebreak Ruby, Dan sets an example for her by urinating in his backyard. Still, there’s nothing really objectionable on display that would debar most family members from enjoying the movie.

Anyone who has watched CBS’ weekend morning program “Lucky Dog” knows how easily a frenetic canine can steal viewers’ hearts. Ruby seems poised to do the same. With so much bad news currently assaulting the public, the story of her bond with Daniel and her service to the community proves both life-affirming and heartwarming.