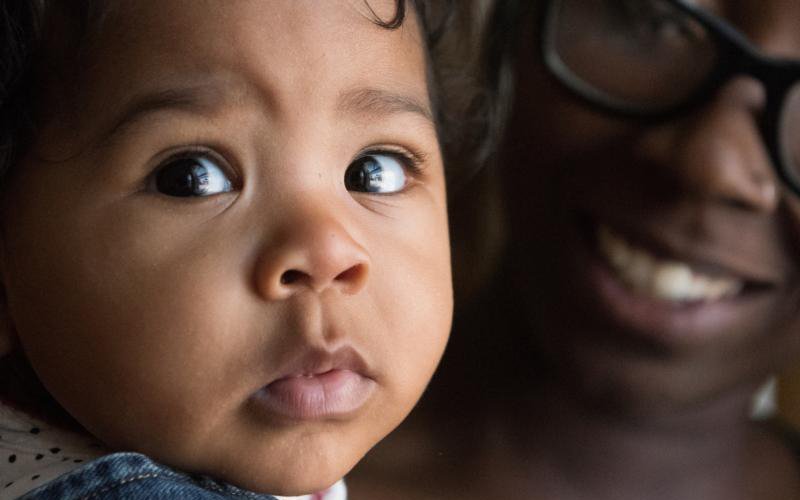 A woman holds a child in 2016 at a maternity home in Riverside, N.J., one of six pro-life maternity homes in the Good Counsel network. Good Counsel also has four in New York state and one in Alabama and works with other homes all over the country. The Riverside facility houses about a dozen expectant mothers, provides a safe environment for the women to continue their pregnancy, and offers continuing education, job training and material support. (CNS photo by Jeffrey Bruno)

WASHINGTON (CNS) — When Chris Bell was working in Times Square in the late 1970s, he was shocked to repeatedly see young mothers entering crisis shelters with their children, and he decided that he had to do something.

With the help of Father Benedict Groeschel, a member of the Franciscan Friars of the Renewal, and his spiritual director at the time, Bell founded Good Counsel, a network of pro-life maternity homes.

Currently, Good Counsel operates seven homes — four in New York state, one in New Jersey, one in Alabama and one in Connecticut — and works with other homes all over the country. It also is looking to both grow and expand its network.

“Good Counsel is one of the founding members of the National Maternity Housing Coalition,” Bell told Catholic News Service. “Most of the homes are small and limited in what they can do, but we can help find a place for any pregnant woman in the country.”

Bell said that any pregnant women can enter the maternity homes for free, and the homes will help provide them with opportunities to go back to school and find jobs.

Good Counsel will even assist pregnant women with drug addictions or mental illnesses and help find suitable places for them.

They also can help plan adoptions. Bell said that many women don’t realize that they can choose the couple who would adopt their child and fear that the child will be placed in the foster care system.

Bell said that many women who are told that their child will have genetic defects can benefit from maternity homes.

“I don’t know why the only response so many medical people have is to tell the mother to get rid of it if it looks like the child will have genetic defects,” he said. “Especially in the United States, where we’re rich and have the technology to help them.”

He told the story of a woman whose doctor told her that her unborn son had a defect in every cell in his body, and the doctor recommended she abort.

She then called Good Counsel, saying “I just want to be a good mother.” Good Counsel took her in, found a different medical facility for her, and prayed with her because she wanted to pray.

When the boy was born, the fears of the doctor were unfounded. He had a hole in his heart, which required two surgeries, but by the time the mother left the home her son looked like any other one-year-old.

Bell also told another story of a mother who already had a 3-year-old when she came to Good Counsel.

When she told the father that she was pregnant, he kicked her in the stomach and she left him.

Bell said he thought that media coverage was one reason for a lack of awareness about maternity homes.

“I think the media has a strong bias against anything anti-abortion,” he said.

Despite that, he intends on continuing his work.

Editor’s Note: Information about the Good Counsel network of homes can be found by going to goodcounselhomes.org or by calling (800) 723-8331.