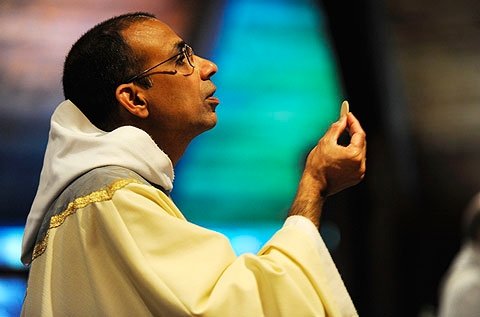 Father Gerard D’Souza was blessed as the new abbot of Abbey of the Genesee during a July 30 Mass at the abbey. Above, he offers Communion during the Mass.

The recent leadership transition in the Diocese of Rochester quickly became public knowledge. But a similar shift in leadership also took place recently — albeit more quietly — at the Abbey of the Genesee.

Abbot Gerard D’Souza, OCSO, is the new leader of the cloistered Trappist monastery in Piffard, Livingston County. He was elected and installed as abbot on May 30, succeeding Father John Denburger — who, like Bishop Emeritus Matthew H. Clark, was required to submit his resignation upon turning 75 years old. The new abbot subsequently was given an abbatial blessing by Bishop Clark during Mass on July 30 at the abbey.

"I have a sense of the great responsibility that goes with the office of abbot — and am also aware that by myself I could never measure up to what is expected of the abbot by the Rule," Abbot D’Souza said, referring to the Rule of St. Benedict that guides the Trappists’ life. "At the same time, I am confident that this is God’s monastery and that he cares for us more than I ever could."

Born in Qatar to parents from India, Abbot D’Souza, 54, was raised in India and earned a bachelor’s degree in psychology from the University of Bombay (now known as Mumbai). He engaged in seminary studies at St. Pius X College in Mumbai and, after moving to the United States in 1988, earned a master’s degree in religious studies from the Archdiocesan Catechetical Institute (now known as the Institute of Religious Studies) in Dunwoodie, Yonkers.

He entered Abbey of the Genesee in 1992 and took his solemn vows 1999. He completed his priestly studies at Catholic University of America, and in 2001 was ordained by Bishop Clark at Abbey of the Genesee. He has worked in the abbey’s bakery, as a cook and in the business office. In 2004 he was appointed novice master, staying in that role until becoming abbot.

His election on May 30 was conducted by Abbot Elias, the father immediate from Abbey of Gethsemani, Ky., who then installed Abbot D’Souza later that day to begin a six-year term.

Abbot D’Souza becomes the sixth abbot in the 61-year history of Abbey of the Genesee. This marks the latest chapter of his highly satisfying life as a Cistercian of the Strict Observance.

"After 20 years, I can say that I am happy to have persevered at the abbey. The privilege of growing to know the mystery of Christ Jesus here is priceless," he stated. "We have a very good community, and growing to know the brothers as brothers in Christ is entering into the hundredfold promised by Jesus."

Abbot D’Souza praised the leadership of his predecessor, Father Denburger, who celebrated his 75th birthday on May 11 and thereby relinquished his role as abbot.

"Father John is a very compassionate and humble priest with a deep respect for every human person. His gift is empowering people. As an abbot he has been for me a source of support, wisdom and common sense. He gave me a fair amount of responsibility and thus was preparing me to shoulder the responsibilities of this position," Abbot D’Souza said. Meanwhile, Father Denburger holds similarly high praise for Abbot D’Souza and his election as abbot: "He is a good man, good monk and good friend. I am overjoyed."

Father Denburger served as the monastery’s abbot for nearly 11 years. A native of Allentown, Pa., he was ordained a priest of the Diocese of Allentown in 1963. He entered Abbey of the Genesee in 1987 and made his solemn profession of vows in 1992.

"It’s been very interesting. I learned an awful lot about myself," Father Denburger said of his time as abbot, adding that "I’ve been surrounded by very generous monks. It’s always a gift to have good men around you."

Father Denburger will remain in residence Abbey of the Genesee, serving as junior master as well as a cook. He also has returned to being master of ceremonies, a title he held before becoming abbot.

"As I look back over my life — 25 years here and 24 in the Diocese of Allentown as a diocesan priest — I praise God. I would do it the same way," Father Denburger remarked.

He is one of two former abbots residing at Abbey of the Genesee. Father John Eudes Bamberger, who led the abbey from 1971 until his 2001 retirement, lives there as a hermit while also working for the abbey library, giving weekly conferences at nearby Bethlehem Retreat House, meeting with visitors and hearing confessions.