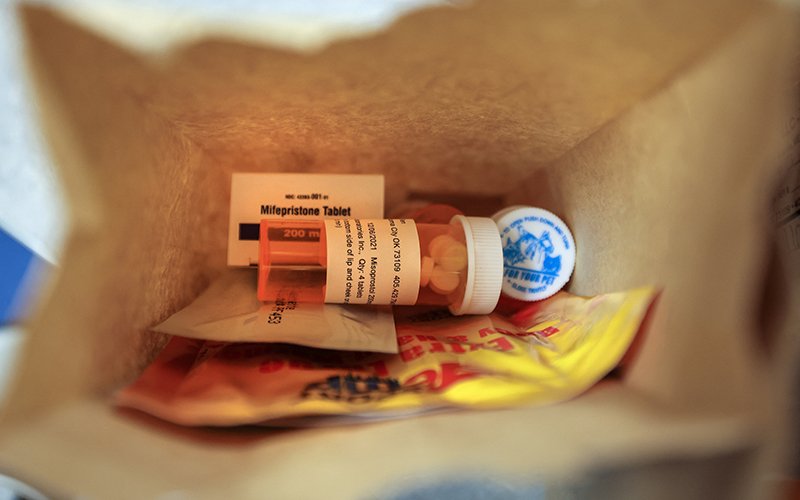 In a Jan. 6 statement, Bishop Michael F. Burbidge of Arlington, chairman of the U.S. Conference of Catholic Bishops’ Committee on Pro-Life Activities, denounced the move.

“The Catholic Church is consistent in its teaching on upholding the dignity of all life, and that must include care for both women and their children,” Burbidge said. “We decry the continuing push for the destruction of innocent human lives and the loosening of vital safety standards for vulnerable women.”

The FDA announced early January that under its modified Mifepristone REMS Program, patients will be able to acquire Mifeprex — and its approved generic — at retail pharmacies. According to the FDA website, “a Risk Evaluation and Mitigation Strategy (REMS) is a drug safety program that the U.S. Food and Drug Administration (FDA) can require for certain medications with serious safety concerns to help ensure the benefits of the medication outweigh its risks.”

When used in combination with misoprostol, mifepristone — introduced 20 years ago — induces a “medication abortion” up to 10 weeks into a pregnancy. The same pills used for abortions are also prescribed to women who experience early pregnancy miscarriage.

The Guttmacher Institute reported in December 2022 that their census of all known abortion providers found “medication abortion accounted for 53% of all facility-based abortions in the United States in 2020.”

The FDA’s January announcement, however, portends to accelerate the transition of first trimester abortion — 90% of all abortions in the U.S. — from a surgical procedure to a medication experience. It builds on a December 2021 FDA rule change that allows telemedicine consultations with mail-order pharmacy fulfillment, reversing a prior requirement for in-person consultation.

Both Walgreens and CVS plan to offer mifepristone in states where it is legal. While many states still restrict abortion pill use, state policies may change in the aftermath of the FDA’s latest rule modification.

Molly Sheahan, associate director of Life & Family Advocacy at the California Catholic Conference, noted the digital dimension of securing abortion pills requires the pro-life movement to understand where it needs to be.

“The frontier on the issue of abortion isn’t necessarily the abortion clinic — it’s the mobile phone,” said. “Women are seeking abortion by searching online … they’re able to order abortion pills through the mail. That’s been available for a while — it’s just become more readily accessible now.”

In response, the California Catholic Conference encourages the utilization of social media and digital ads to reach women in the state, where abortion appointments have markedly increased post-Dobbs.

“It just creates additional concern for women when they’re not able to be seen by a physician to screen them for contraindications,” said Sheahan. “We’re putting vulnerable people at greater risk when we’re not serving them in a physician’s office.”

Leah Jacobson, CEO and founder of Guiding Star Project, a nationwide network of pro-life health centers, said the normalization of the Plan B emergency contraceptive “has been so normalized that a woman doesn’t even think twice.”

“Many college-age women have used Plan B on several occasions — and the abortion pill, to them, is just a next back-up step in case Plan B failed,” she said.

Guiding Star has focused on fostering an early interaction with patients — as young as age 9 — about healthy life choices. In the event their patients experience an unplanned pregnancy, they can turn to Guiding Star for life-affirming care, support and resources.

“Furthermore, no onsite or in-person physical assessment to even document the weeks of gestation or the location of the fetus is required,” they stated. Without follow-up physical examination to assess a potentially incomplete abortion, CMA notes increased “risks of continued bleeding, retained products of conception necessitating surgical removal, or infections, which can lead to infertility and in extreme cases even death.”

The CMA further cautioned that “removing the requirement for in-person dispensing facilitates the potential for concealing rape of a minor.” Such concerns also extend to human trafficking victims.

Katherine Talalas, assistant director for Pro-Life Communications for the U.S. Conference of Catholic Bishops, told OSV News it is critical for Catholics to inform, advocate at state and federal levels, and pastorally assist.

The majority of abortion-minded women fall below the poverty line, are unmarried, and lack social or financial support, Talalas explained. She said the USCCB’s Walking with Moms in Need initiative — a parish-based process that assists vulnerable pregnant women — seeks to provide a safety net for all, “whether you are in a red state, a blue state, a state that already has a lot of regulations on abortion or none.”

Abandoning women to the trauma of chemical abortion, which always involves a delivery of some kind, is cruel, Talalas stressed.

“Abortion doesn’t make a baby disappear,” she said. “It just means that the baby’s life is ended.”

Kimberly Heatherington is an OSV News correspondent who writes from Virginia.

Tags: Abortion, Health
Copyright © 2023 OSV News / Our Sunday Visitor, Inc. All rights reserved. Linking is encouraged, but republishing or redistributing, including by framing or similar means, without the publisher's prior written permission is prohibited.