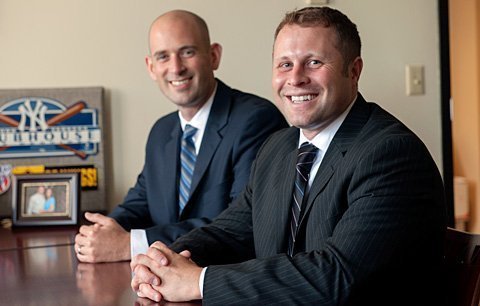 GATES — At an age when many of his peers are still building their teaching careers, 32-year-old Anthony S. Cook III has ascended to the role of diocesan superintendent of schools.

His associate, Jeff Green, is even younger, logging in at age 30.

Cook and Green, who began their positions July 1, acknowledged that holding these administrative roles at such young ages will raise some eyebrows. But they pack ample amounts of enthusiasm and energy, which may well serve as a tonic for a school system that’s striving to stabilize its enrollment after decades of decline.

"The principals we’ve talked to already have been very excited about what we can bring," Cook said. "The idea of us being young is overcome with effective communication."

Green, meanwhile, welcomes the challenges of his new duties and said his relatively scant experience is "not something that’s going to hold me back from trying."

Cook and Green step into their positions during an overall time of newness in diocesan history, with a bishop expected to be appointed in the not-too-distant future.

"It’s an exciting time for the Catholic Church in Rochester," Cook said.

Yet both men are equipped with much more than youthful enthusiasm. Cook attended a master’s program at the University of Notre Dame that was tailored specifically for Catholic-school leaders, and he also had been principal of Seton Catholic School in Brighton since January 2012. In stating his intent to log a long career in Catholic schools, Cook said his commitment is "bound like a covenant; it’s something I’ll always be bound to."

Green has a doctorate in teaching and curriculum from the University of Rochester and spent the previous six years as a high-school teacher and administrator in the Rochester City School District. He described his new position as the "perfect opportunity to blend personal and professional," noting that his personal commitment is borne of having attended Catholic schools from elementary through high school.

Cook and Green were schoolmates for two years at Aquinas Institute in the late 1990s. At the time of Cook’s 1999 graduation, there were a total of 50 diocesan elementary and junior-high schools. A mere 14 years later the number stands at 20.

Catholic-school attendance has steadily decreased both locally and nationally since the 1960s. In 2008, the year that 14 diocesan schools closed, overall enrollment in kindergarten through eighth grade was approximately 5,500 — a 50-percent decline in just 10 years. According to diocesan officials, enrollment for K-8 was 4,344 in 2012-13 and is projected to be 4,200 for the upcoming school year. Although the diocesan decline slowed during the five-year tenure of recently retired superintendent Anne Willkens Leach, Cook and Green emphasized their desire to halt and hopefully reverse the downward trend.

Cook said he welcomes feedback from families, particularly those who no longer send their children to Catholic schools or are on the fence about doing so.

"Are we reaching out to families that may have left the schools? What are the reasons? Through surveys and other means, we could have opportunities for growth that all comes with building that trust again — trust that those (remaining) schools are going to be there," Cook said.

Cook and Green added that they’re striving to have strong relationships with each diocesan school. To that end, they’ve spent much of the summer traveling to meet all the principals.

"Even though we have 20 schools over vast distances, we want the community to see that we’re invested in all of our schools. If we’re going to visit St. Pius Tenth 10 minutes away, we want to visit St. Joseph in Auburn just as much, and All Saints in Corning. We want to give the same attention to all of our schools and Anne (Willkens Leach) did a great job with that," said Cook, adding that his own experience as a Catholic-school principal makes him sensitive to those leaders’ thoughts and concerns.

Another priority of the new superintendent is to work toward making Catholic education as affordable as possible. For instance, Cook said he plans to make his voice heard in Albany seeking legislation that would result in financial breaks for Catholic-school families, such as educational tax credits.

"I don’t know or have any idea what impact I’ll have, but it’s something I’m invested in, lobbying to help further Catholic education in New York state," Cook said.

Yet even with such efforts, Cook and Green acknowledged that Catholic education will remain a significant drain on families’ budgets. Their mission, therefore, is to convince folks it’s worth the financial sacrifice.

"If people place a value on a certain product, they’ll find the resources to make that possible," Cook remarked. "My parents couldn’t necessarily afford an Aquinas education for me and my three siblings, but they saw the value of it."

Cook and Green said the benefits of Catholic schools lie in their high educational standards and a whole lot more. For instance, Green said he has friends who send their kids to Catholic schools no matter what it takes "because they want to become a part of that community."

"At any school, the more involved the parents are in the education, the better it is for the entire school community. I was very fortunate to be a part of that," Green said, noting that his mother was a classroom monitor and his father was involved in Catholic Youth Organization sports.

"You have families at schools that are deeply invested," Cook added. "It’s not like they’re just sending their kids, dropping them off and picking them up in the afternoon. They’re volunteering at everything they can be involved with." He said that when children graduate from sixth grade at Seton Catholic, "it’s almost as if the parents are leaving that community too."

Perhaps most importantly, Cook and Green pointed out the moral and spiritual formation offered through Catholic education.

"Parents can send their children to a Catholic school and know that values and morals are part of the school day — not just as a stand-alone subject, but throughout the day and as a preparation for life," Green said. "That’s what sets us apart."

Cook, recalling his experiences with students at Seton Catholic, said these intangibles showed up in conversations about what Jesus would do; voicing compassion for outcasts of society; and engaging in deep prayer when faced with difficult times in life.

"I love this word, ‘Catholicity’. You could almost touch it, it was so present — just in little things, the prayers you’d see in kindergarten and first grades to a level that was so sophisticated," Cook said. "If you’re ever looking for the value, it’s just the level to which they processed all this."

* University of Rochester: Due to complete doctoral degree in educational administration in 2016.

* University of Rochester: Doctorate in teaching and curriculum, 2012.