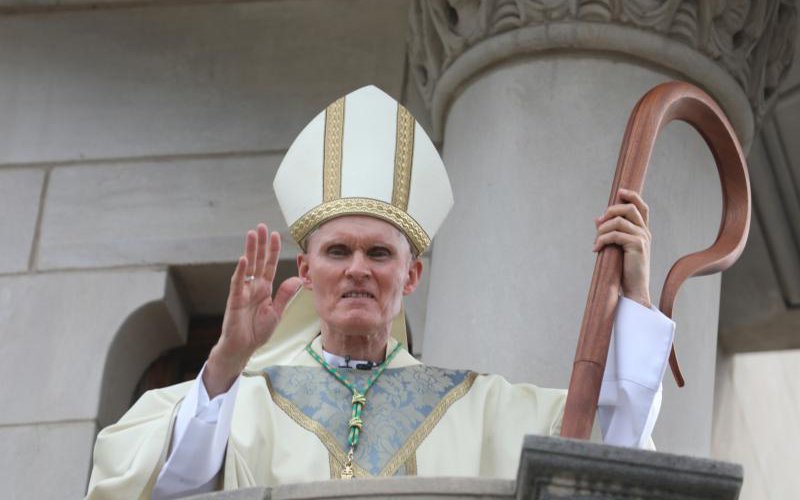 WHEELING, W.Va. (CNS) — Bishop Mark E. Brennan was welcomed Aug. 22 at the Cathedral of St. Joseph in Wheeling as the ninth bishop of the Diocese of Wheeling-Charleston, which encompasses the state of West Virginia, in a ceremony filled with song and applause.

After processing into the cathedral, the bishop, who until now was an auxiliary bishop of Baltimore, listened as Msgr. Walter Erbe, charge d’affaires at the apostolic nunciature in Washington, read the papal bull of his appointment. Bishop Brennan held up the official document to the congregation “for those with good long-range vision,” he said to laughter and sustained applause.

Asked by Msgr. Erbe if he accepted the responsibility for which Pope Francis chose him, the bishop said, “With faith in Jesus Christ and with the help of God, I do accept the pastoral care of the people of God of the Diocese of Wheeling-Charleston. I resolve to serve faithfully the spiritual needs of the local church.”

Msgr. Erbe represented Archbishop Christophe Pierre, apostolic nuncio to the Unites States, who could not attend due to a meeting in Rome.

Then Baltimore Archbishop William E. Lori, who has been apostolic administrator of Wheeling-Charleston since last September, led Bishop Brennan to the cathedra, the bishop’s chair, and handed him his new crosier, a wooden pastoral staff — taller than the bishop himself — with a large curve at the top.

Archbishop Lori noted that he has known Bishop Brennan since their days in the seminary. “He is the strong, loving and wise shepherd we have been praying for.”

Bringing light to the darkness and service to the people were key themes of the liturgy, including musical selections such as “Christ Be Our Light” and “The Hand of the Lord,” as well as the bishop’s homily.

Quoting from the first reading from the prophet Isaiah, Bishop Brennan began his homily saying, “The people who walked in darkness have seen a great light; upon those who lived in a land of gloom, a light has shone.”

That is an apt description of how Catholics in the U.S. and especially West Virginia have been dealing with anger, frustration and distrust of church leaders, he said, alluding to Bishop Michael J. Bransfield, former head of the diocese, without mentioning him by name.

Bishop Bransfield resigned in September 2018 amid allegations amid allegations of sexual harassment and financial mismanagement. Four days before Bishop Brennan was named as the new bishop, Pope Francis announced disciplinary actions for Bishop Bransfield, prohibiting him from living in the Diocese of Wheeling-Charleston and from presiding or participating anywhere in any public celebration of the liturgy.

As part of those disciplinary actions, a communique from the apostolic nunciature posted on the diocesan website July 19 also said Bishop Bransfield would be obligated “to make personal amends for some of the harm he caused; the nature and extent of the amends to be decided in consultation with the future bishop of the Wheeling-Charleston.”

“The scandals we have learned about have caused painful disappointment, confusion, anger and distrust of church leaders. We have to face that situation with open eyes and determined spirits to bring about true and lasting change,” Bishop Brennan said.

But Isaiah’s message to the oppressed people does not end in darkness. “Listen to it again: ‘Upon those who lived in a land of gloom, a light has shone,'” the bishop said. “My friends, it takes no humility on my part to admit that I am not the light,” he said to some laughter from the congregation.

“The light is a child born to us. The light is Mary’s child, Jesus, who calls himself the Light of the World.”

He said he hopes that by trusting in the Lord and the people’s prayers for him, he could bring some of that light to people, “as the moon reflects the sun.”

He said dealing with the consequences of past bad behavior is one of his responsibilities as the new bishop, and he promised to address it. But the church has to look forward with the strength to do better and to live the faith with integrity so as to reflect the Lord’s enduring light.

He noted that some people have stopped attending Mass in light of the scandals in the church and that others may have been tempted to stop. “Unity with one another and with God is what God wants from us,” Bishop Brennan said.

He has returned to Mass, although he remains eager to see the church address its failings and work toward reform.

His many years as a parish priest and two and a half years as a bishop have taught him that “the work of healing and renewal is the work of us all. Every one of us must find ways to reveal that light that overcomes all darkness.”

The concerns in the diocese involve not just the misdeeds of the former bishop, the revelations of clergy sexual abuse or the irresponsibility of some bishops.

There also are great obstacles in the path of human development, Bishop Brennan said, including the opioid epidemic in the state “that is robbing us of our relatives and friends”; poverty that envelops towns where the factories have closed and areas that have never known prosperity; the need for educational opportunities, which Catholic schools in the diocese can help address; and the hopelessness of many people that leads them to depression and to consider suicide.

“In the face of all these social evils and many others, we dare in this church to offer something better: good news. Good news in the midst of very bad news — news too good to keep to ourselves,” the bishop said.

“That experience of Christ as savior and lord, in his church, is something we must share with others.”

His voice rising to a crescendo as he concluded his homily, he urged the packed cathedral and an overflow crowd watching at the nearby WesBanco Arena to “let God fulfill his purpose in us and not let the darkness cover the earth.”

“We can right the wrongs of the past and move on to make Christ known,” he said. “We can help our neighbor in need and remain united in faith and love.”

“West Virginia Catholics, cherish your faith and the holy church,” Bishop Brennan said. “Make Mary’s ‘yes’ your own and work with me and your brothers and sisters to let the light of Christ be a light brightly visible in the mountains and valleys, the cities, streets and country roads of this beautiful part of God’s creation, West Virginia.”

The congregation erupted in applause.

At the end of the Mass, Bishop Brennan thanked Archbishop Lori for 40 years of friendship, for mentoring him as a bishop and for serving for nearly a year as apostolic administrator of the diocese.

He thanked fellow bishops, clergy, religious and laypeople present, including interfaith representatives of the community, and members of the diocesan staff who worked under difficult circumstances since last fall.

“Most of all, I thank God for all his unceasing kindness over the years. I have let him down, but he has never let me down,” the bishop said. “From him all blessings flow.”

After the Mass, Bishop Brennan emerged on a small balcony on the corner of the cathedral, about 20 feet above the ground, to bless the people gathered and all of Wheeling.

Later, still in his liturgical vestments, he crossed the street to greet some of the residents of the Formosa Apartments directly facing the cathedral. Yvette Smith and Zyanne Hamlin, who live in the building, said they got “good vibes” from the bishop, and Smith said she might consider attending church when he is there.

“For him to come across the street personally and shake my hand, it stunned me,” Hamlin said.