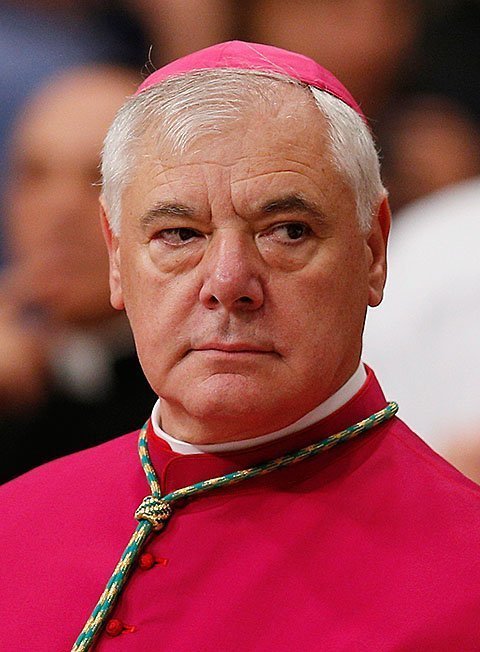 German Archbishop Gerhard Muller, prefect of the Congregation for the Doctrine of the Faith, is among 19 new cardinals named by Pope Francis Jan. 12. He is pictured in St. Peter's Basilica at the Vatican in this 2013 file photo.

VATICAN CITY (CNS) — Archbishop Gerhard L. Muller, prefect of the Congregation for the Doctrine of the Faith, was the first Vatican official formally confirmed in his post by Pope Francis and will be among the first 19 men the pope inducts into the College of Cardinals.

Instead, Cardinal-designate Muller, who turned 66 Dec. 31, will be made a cardinal by Pope Francis Feb. 22, the pope announced Jan. 12.

Pope Francis confirmed Archbishop Muller as his doctrinal chief in September. The congregation promotes the correct interpretation and promotion of Catholic theology and also is responsible for conducting investigations of clergy accused of sexually abusing minors.

In addition to the talks with the traditionalist followers of the late Archbishop Marcel Lefebvre, Cardinal-designate Muller has garnered the most headlines for his role in the ongoing Vatican discussions with the U.S.-based Leadership Conference of Women Religious, his cautionary comments about efforts to make it easier for divorced and remarried Catholics to receive Communion and his friendship with Dominican Father Gustavo Gutierrez, considered the father of liberation theology.

In 2004, he co-authored a book, "On the Side of the Poor: The Theology of Liberation," with Father Gutierrez. In the 1990s, when then-Cardinal Joseph Ratzinger headed the congregation before becoming Pope Benedict XVI, Father Gutierrez was asked to write and rewrite articles clarifying some of his theological and pastoral points.

In a 2012 interview with the Vatican newspaper, Archbishop Muller said he was invited to participate in a seminar with Father Gutierrez in 1988, and he went "with some reservations" because the doctrinal congregation had criticized aspects of liberation theology that it said were too influenced by Marxist ideology.

"One must distinguish between an erroneous and a correct liberation theology," Archbishop Muller told the newspaper. While a Catholic must reject Marxist ideas and analysis, he said, "we must ask ourselves sincerely: How can we speak about the love and mercy of God in the face of the suffering of so many people who do not have food, water, medical care; who don’t know how to give their own children a future; where human dignity really is lacking; where human rights are ignored by the powerful?"

As Pope Francis spoke about his concerns for the family and for divorced and civilly remarried Catholics wanting to receive Communion, Archbishop Muller urged patience and caution, saying the church required such Catholics to obtain an annulment of their first marriage in order to return to the sacraments.

In an article published in the Vatican newspaper in late October, he wrote that a "case for the admission of remarried divorcees to the sacraments is argued in terms of mercy," but such an argument "misses the mark" in regard to the sacraments, since the "entire sacramental economy is a work of divine mercy, and it cannot simply be swept aside by an appeal to the same."

"If remarried divorcees are subjectively convinced in their conscience that a previous marriage was invalid, this must be proven objectively by the competent marriage tribunals," he wrote. "Marriage is not simply about the relationship of two people to God, it is also a reality of the church, a sacrament, and it is not for the individuals concerned to decide on its validity, but rather for the church, into which the individuals are incorporated by faith and baptism."

Before being named prefect of the congregation, the archbishop had served five years as one of its members and had been a member of the International Theological Commission from 1998 to 2003. Pope Benedict led both bodies until 2005, when he was elected pontiff.

Cardinal-designate Muller has close ties to retired Pope Benedict and in 2008 helped establish the Pope Benedict XVI Institute, which is publishing a complete collection of works by the German-born pope and theologian.

Cardinal-designate Muller is a native of Mainz, Germany. He was ordained to the priesthood in 1978 and served in his native diocese as a chaplain and high school religion teacher. With degrees in philosophy and a doctorate in theology, he was a professor of dogmatic theology in Munich from 1986 to 2002.

He was named bishop of Regensburg in 2002 and then-Cardinal Ratzinger attended his episcopal ordination. Bishop Muller chose as his episcopal motto "Dominus Iesus" (Jesus is Lord), which comes from St. Paul’s Letter to the Romans and is the title of the 2000 document on salvation through Christ alone, issued by the doctrinal congregation under then-Cardinal Ratzinger.