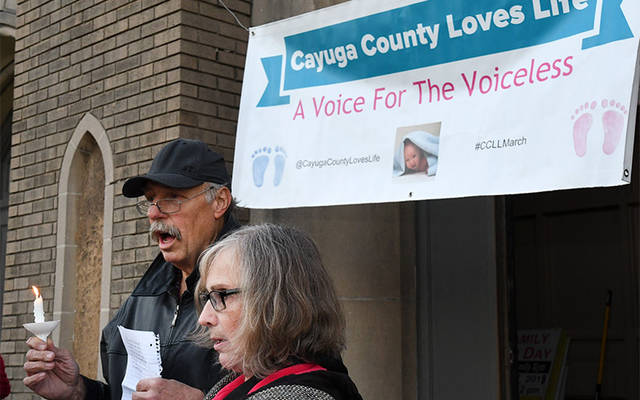 January 22, 2019, is a significant date for many reasons. Not only did that date mark the 46th anniversary of the U.S. Supreme Court’s landmark Roe v. Wade decision, but also that day the New York State Legislature passed the Reproductive Health Act, which expanded abortion in the state.

It also was the day 20-year-old Anna Ducayne realized she had to take a stand for life.

“After the Reproductive Health Act was passed in January of 2019, I wondered how all of this came to be. I realize that although I had always held a strong stance against abortion, I hadn’t contributed much to the pro-life movement,” Ducayne said, noting that she was hardly the only silent pro-lifer in the Auburn community. “Even when many in my community held strong pro-life beliefs, there wasn’t a noticeable pro-life presence here in Cayuga County. I noticed that many people, including myself, fall short when it comes to actively working against the abortion industry.”

A new organization, Cayuga County Loves Life, soon was born out of Ducayne’s desire to create an opportunity for members of her community to become actively involved in defending innocent life and fighting for the rights of the unborn in particular, she told the Catholic Courier. A parishioner of St. Mary Parish in Auburn, Ducayne’s first step was to contact her parish’s parochial vicar, Father Justin Miller.

“She asked if I would help her in some way, and we decided a grassroots public protest and time of prayer would be the ideal response for our community,” Father Miller recalled.

The resulting protest, dubbed Auburn Loves Life, was planned for Feb. 23, a Saturday on which similar protests against the Reproductive Health Act were planned in Albany and other locations throughout the state, Father Miller said. Approximately 200 people turned out at a small park in downtown Auburn to pray together, participate in moments of silence, and listen to Scripture readings and readings from pro-life authors.

“It was a great opportunity to network and to unite as concerned citizens, people of all faiths or no faiths at all who wanted to defend the right to life from conception to natural death,” Father Miller said.

Ducayne and Father Miller soon realized that although many of the protesters were Auburn residents, the event also had received overwhelming support from people who lived in other areas throughout Cayuga County. The name of their fledgling group was changed from Auburn Loves Life to Cayuga County Loves Life to reflect this support, Ducayne said.

The group’s mission is to defend life from conception to natural death by inspiring, uniting and encouraging the local community to understand life issues, and by providing local pro-lifers with the information, tools and motivation necessary to advance the movement and spread the pro-life message throughout Cayuga County. One of its main goals is to teach people to value and love one another, Ducayne said.

One of the group’s first acts was to present a resolution to the Cayuga County Legislature asking the lawmakers to formally express an objection to the Reproductive Health Act and affirm New Yorkers’ right to life.

“Although the effort was narrowly defeated, it led to an increase of networking and a groundswell of support,” Father Miller said.

The group’s second public event was a Sept. 28 pro-life march through downtown Auburn and a rally on the steps of city hall, where nationally known pro-life speakers rallied the crowd of more than 250, Ducayne said. Less than a month later, during October’s Domestic Violence Awareness Month, Cayuga County Loves Life hosted a candlelight vigil outside of Auburn’s Holy Family Church in memory of children lost to abortion.

“We had a banner that emphasized that domestic violence sadly can begin in the womb,” Father Miller explained.

Cayuga County Loves Life, which has a board of directors and is currently seeking formal nonprofit status, is in the process of planning another march in support of life and encouraging other local communities to start similar pro-life groups, according to Ducayne and Father Miller. The organization encourages pro-life activism in people of all ages but focuses particular attention on the young people in Cayuga County, Ducayne said.

“We hope to inculcate future generations with the pro-life message and instill in them the importance and sanctity of life,” she said.