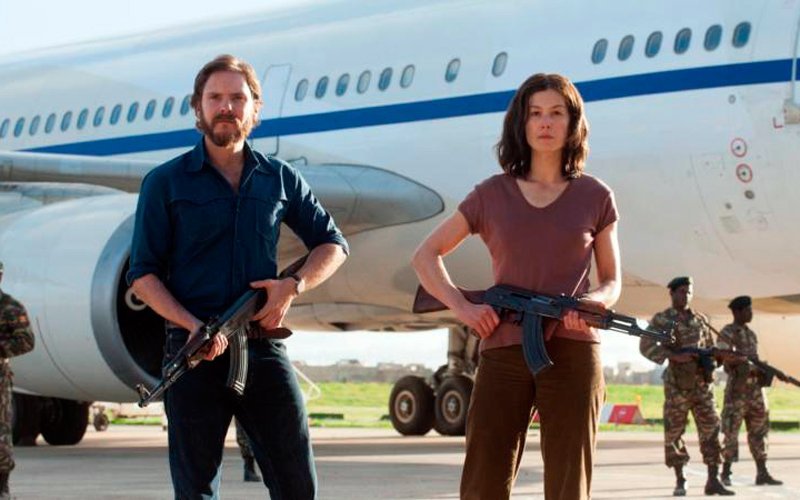 Daniel Bruhl and Rosamund Pike star in a scene from the movie "7 Days in Entebbe." The Catholic News Service classification is A-III -- adults. The Motion Picture Association of America rating is PG-13 -- parents strongly cautioned. Some material may be inappropriate for children under 13. (CNS photo by Focus Features)

NEW YORK (CNS) — All the tension of a daring military raid has somehow been drained from “7 Days in Entebbe” (Focus).

Based on the 1976 Israeli commando mission that rescued more than 100 hostages from Entebbe Airport in Uganda, the film is the fourth dramatization of that fateful week. It attempts to give a sympathetic gloss to two German leftists who planned the hijacking of an Air France flight — Wilfried Boese (Daniel Bruhl) and Brigitte Kuhlmann (Rosamund Pike).

With a better script and bigger budget, director Jose Padhila and screenwriter Gregory Burke could have made an effective thriller. But neither is in evidence here, nor is there a vital historical or moral context. The result is a simplistic account of mostly bad Palestinians and Ugandan soldiers vs. universally good Israelis, and airplane passengers who might as well be nameless, faceless cattle.

The history: In late June 1976, a small group of Germans affiliated with the Popular Front for the Liberation of Palestine hijacked an Air France jet, with 246 passengers, headed to Paris from Tel Aviv via Athens. They forced the pilot to switch course to Entebbe and separated out the Jewish passengers at a decrepit unused terminal.

They demanded a $5 million ransom and the release of more than 50 Palestinian militants, most of whom were held in Israeli prisons. After buying some time with a promise of negotiations and after half the hostages had been set free, on July 3 and 4, the Israeli government, at huge risk, sent an armed unit to rescue the remainder.

The story of how the Israelis flew in massive transport planes at an altitude of no more than 100 feet, to avoid radar, and surprised and overran the hijackers and Ugandan forces is the stuff of legend — and was considered to be an effective retaliation for the murder of the Jewish state’s athletes at the 1972 Summer Olympics in Munich.

“7 Days,” however, focuses on Boese and Kuhlmann, both sensitive types who flinch at the optics of Germans holding Jews at gunpoint, and on the internal struggle at the top levels of the Israeli government, where Prime Minister Yitzhak Rabin (Lior Ashkenazi) and defense minister Shimon Peres (Eddie Marsan) discuss, at great length, whether swift military action should take the place of negotiations.

Occasionally, Idi Amin (Nonso Anozie) in all his air of strutting medaled menace, shows up to alternately greet or threaten the hostages.

Padhila uses rehearsals and a performance by a dance troupe as a sort of framing device to give the goings-on some urgency and rhythm. But this only distracts from the imagery of military planning.

Parallel discussions about the morality of holding Jews hostage to achieve political ends and whether it is ever right for governments to negotiate with terrorists make up the bulk of the dialogue. Since viewers of faith already know the answer to the first question, this leaves only what turns out to be a superficial look at the Israeli political rivalries of the time.

The film contains occasional gun and physical violence, fleeting gore and a single use of rough language. The Catholic News Service classification is A-III — adults. The Motion Picture Association of America rating is PG-13 — parents strongly cautioned. Some material may be inappropriate for children under 13.