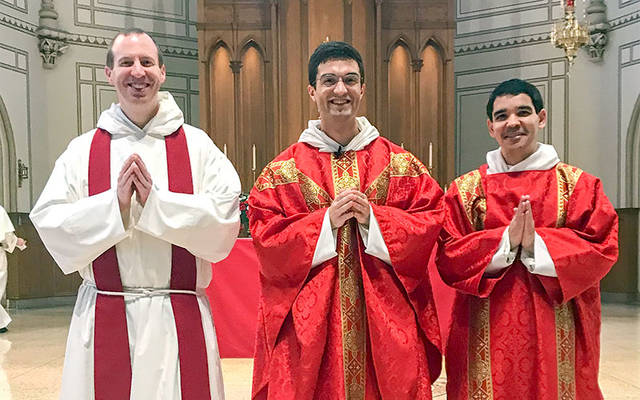 Father Aquinas Beale was ordained a priest in the Order of the Preacher May 19 at the Basilica of the National Shrine of the Immaculate Conception in Washington, D.C.

Father Aquinas Beale, OP, was ordained May 19 as a priest in the Order of Preachers, also known as the Dominicans. He is the son of Lauretta Beale, director of youth and young-adult ministry at All Saints Parish in Corning/Painted Post, and her husband, David.

Father Beale, 31, was among nine Dominican friars ordained by New York Cardinal Timothy M. Dolan. The ordination took place at the Basilica of the National Shrine of the Immaculate Conception in Washington, D.C.

Father Beale, formerly Christopher Beale, grew up in Virginia and West Virginia, receiving bachelor’s and master’s degrees in foreign affairs from the University of Virginia. In 2011 he entered the Dominican order, taking the name Aquinas. He made simple vows in 2012 and solemn vows in 2016 before being ordained a transitional deacon in March 2017.

Following his May 19 priestly ordination, Father Beale visited Corning — where his parents moved in 2015 from North Carolina — on June 3 to celebrate the 11:30 Mass at St. Mary Church.

During the summer, Father Beale served at St. Dominic Parish in Washington, D.C. He is continuing to reside at that parish while finishing studies for his licentiate in sacred theology at the Dominican House of Studies.