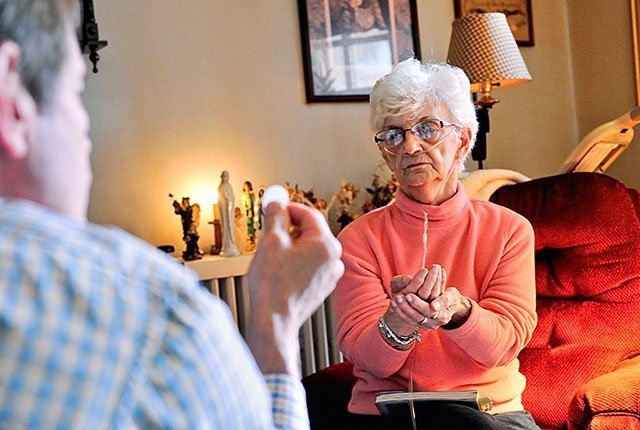 You may wonder from time to time what became of certain older folks you no longer see at church. There’s a good chance they’re not that far away, missing your presence even more than you miss theirs.

They’re among the homebound population, and in Elmira’s Catholic parishes their numbers are significant. Thanks to a new regional ministry, vast improvements are being made to provide this largely hidden group with holy Communion and social interaction on a consistent basis.

"You’d be surprised at the number of people in their 80s and 90s, living by themselves," Deacon Joseph Erway said. "A lot of times when you go to see people, they’re just glad to see somebody there. One guy said, ‘Would you just read to me?’"

Deacon Erway and Lorraine Gardner have served since early this year as full-time pastoral associates for Blessed Sacrament, Christ the Redeemer and St. Mary parishes. Although their positions entail several responsibilities, the homebound ministry is where their most time is spent. This focus is in response to surveys and town meetings from 2011, when parishioners named increased outreach to senior citizens as their top priority.

According to Gardner, the initiative’s first step was to pool information already on file and from parishioners into a computer database of people needing sacraments and visitation. The listing denotes individuals’ parish affiliation and home or nursing-facility address, as well as contact information for caregivers and people designated to speak on behalf of those who can’t speak for themselves.

Next up in developing the ministry was the recruitment and training of volunteers, whose information also was entered into the database. By June of this year, the initiative was up and running. Gardner and Deacon Erway said the initial response has been very strong, with 25 to 30 parishioners currently volunteering and approximately 175 people being visited in Elmira and outlying communities such as Horseheads, Pine City, Waverly and Sayre, Pa.

"For the most part, it’s come together pretty good. We’re seeing so many more people than what was happening before," Gardner said.

She noted that the greater number of volunteers involved, the less chance those in need will fall through the cracks. In addition, she said homebound ministers can make known the need for further pastoral care, such as anointing of the sick, by one of the pastors — Father John DeSocio at St. Mary, Father Scott Kubinski at Christ the Redeemer (St. Charles Borromeo/St. Casimir/Our Lady of Lourdes) or Father Rick Farrell at Blessed Sacrament (St. Patrick/Ss. Peter and Paul). The homebound ministers also can gauge whether people they visit are struggling with basic living issues that require outside assistance.

Gardner said a top goal for 2014 is to develop a transportation ministry, by which homebound people could be brought to church through the purchase of a vehicle that would serve other parish needs as well.

"A lot of them would love to go to Mass if they just had somebody to get them there," Gardner said.

Also planned for the near future is implementation of computer software, known as ParishSOFT, that would allow for an even more comprehensive bank of information. Gardner said that because the homebound ministry’s database is constantly being updated with additions and deletions, it’s vital to have a structured system that’s designed to last. She and Deacon Erway added that a regional visitation system — as opposed to a parish-based one — is a fairly new concept in this diocese and could become a prototype for other regions.

"When the pastors announced this was happening, people said, ‘Oh great, we’ve needed this for awhile.’ Now our responsibility is to maintain it," Deacon Erway said.

Pastoral visitation was previously conducted by Sister Raymond Joseph, RSM, primarily for St. Mary Parish, until she moved a year ago to the Sisters of Mercy Motherhouse near Rochester. Deacon Erway noted that Sister Raymond Joseph has given the new ministry a big assist by providing contact information and other details about the people she has visited in the past.

"She was so relieved that it was being taken over and expanded," he remarked.

The pastoral associates said they pay a fair amount of visits to the homebound themselves and are grateful for the opportunity. Gardner, for instance, cited the woman who helped her deal with the death of her brother this past summer.

"It’s a mutually spiritual benefit," Deacon Erway agreed. "A lot of times you walk away with a smile on your face, either because they made you laugh or you just feel good that you’re doing this."