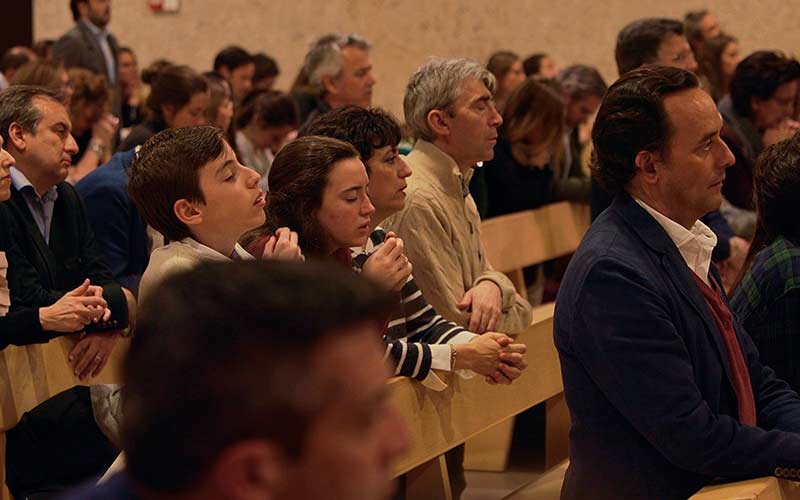 This is a scene from the new documentary "Alive," which tells the stories of five people changed by their encounter with the real presence of Christ in the Eucharist during Holy Hour. (CNS photo courtesy Bosco Films)

NEW YORK (CNS) — “Alive,” a new documentary made in Spain by Bosco and Hakuna Films, tells the stories of five people changed by their encounter with the real presence of Christ in the Eucharist during Holy Hour.

Its viewers “will be moved to action,” a Catholic priest said in a commentary about the film.

“Alive” will open across the United States for one night only April 25, the Monday after Divine Mercy Sunday. The Spanish film with English subtitles is being released by Fathom Events, and a schedule of theaters can be found online at https://www.fathomevents.com/events/Alive-Who-Is-There.

“Alive,” unveiled in a New York premiere in early April, introduces viewers to a former atheist, an average Catholic and other young people.

“Each person faced the challenges of life and once they discovered the weekly Holy Hour, it changed their lives forever,” said Father Edward Looney, a pastor in the Diocese of Green Bay, Wisconsin, who is involved in Catholic media.

His commentary on “Alive” was released by Fathom, which is the 11th largest distributor of content to movie theaters in North America.

Last December, Father Looney created a 10-part series of short videos related to a special Christmas episode released in theaters by the creators of the show “The Chosen,” a streaming series on the life of Jesus and the Gospel stories. The special episode’s release also was by Fathom Events.

Each individual profiled in “Alive” approached the Holy Hour differently, Father Looney said. “But in that time of prayer, they all found something for which they were looking. In that time of prayer they encountered silence and peace. They were afforded an opportunity to ask God, present on the altar, the difficult questions they were facing.

“They could ask God, ‘Are you there?’ And with the gaze of love which emanated from the monstrance, they knew he was,” he continued. “A Holy Hour is a place where we can turn over to the Lord all our stress, discomforts and worries, in the hope that he will take them away.

“Praying before the Lord, we can recharge our troubled spirits and find grace to continue.”

Father Looney is pastor of St. Francis and St. Mary Parish in Brussels, Wisconsin, and pastor of St. Peter and St. Hubert Parish, which has locations in Lincoln and Rosiere, Wisconsin.

“Alive” is “one of those movies that when you see it, you will be moved to action,” he said. “When you leave the theater, you might want to find a church on the way home so you can spend an hour in prayer or discover where you could join a Holy Hour in your area in the upcoming week or month.”

Father Looney said the film “is like a preseason warm-up for us to revive our eucharistic faith and devotion” before the feast of Corpus Christi June 19, which as he noted is the kickoff of the U.S. Catholic Church’s three-year National Eucharistic Revival, which culminates with the National Eucharistic Congress in Indianapolis in 2024.

During the revival, there will be parish, diocesan and regional events to increase Catholics’ understanding of the Real Presence in the Eucharist.

The U.S. bishops approved plans for the revival and the congress last November during their fall general assembly in Baltimore. Both are being spearheaded by the U.S. Conference of Catholic Bishops’ Committee on Evangelization and Catechesis, chaired by Bishop Andrew H. Cozzens of Crookston, Minnesota.