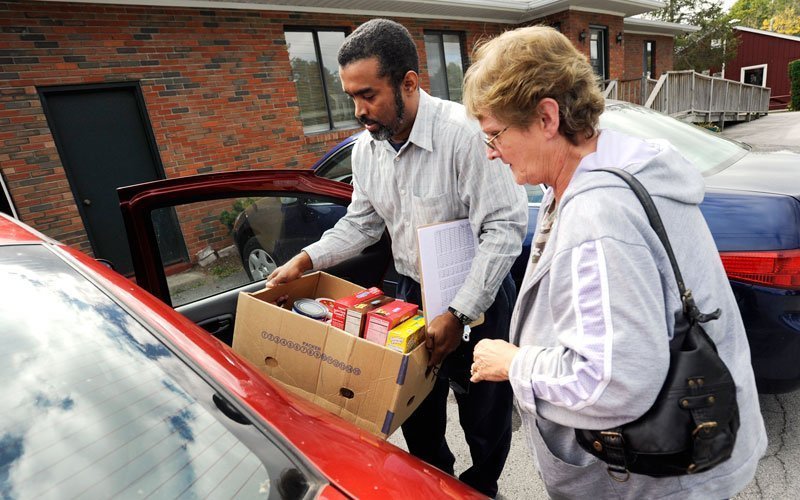 Jennello Horton of Lyons (left) gets a helping hand from the Rev. Rolfi Elivo Sept. 25 at Catholic Charities of Wayne County’s food pantry in Newark.

Wayne County residents now have another place to turn when both their wallets and their cupboards are empty.

This new food pantry was a natural addition for the agency, Deacon Sullivan noted. Catholic Charities already offered a number of services — including a community clothing closet, counseling services and transitional housing for migrant farmworkers — and people often called the agency assuming it offered emergency food assistance, he said.

Deacon Sullivan said he and his agency colleagues had three key goals in mind when they opened the food pantry. First, they wanted to provide a service accessible to people in need throughout all of Wayne County, regardless of where those people live or what faith or congregation they belong to.

“There are other food pantries in Wayne County, including in Newark, but most of them have geographic restrictions,” he said. “People that are in more remote areas don’t always have a place to go.”

The new food pantry already has helped people from all corners of the county, according to its coordinator, the Rev. Rolfi Elivo.

“We are receiving people from all the towns here — Wolcott, Sodus, Lyons, Palmyra, Marion, Williamson, Newark — all of Wayne County. It’s not only for Newark people,” Rev. Elivo said.

His agency also wanted to focus on the Spanish-speaking population, which sometimes bumps up against a language barrier when trying to receive assistance at other places, Deacon Sullivan added. Rev. Elivo, who hails from the Dominican Republic, is bilingual, so clients won’t have to worry about a language barrier at the new food pantry. An AmeriCorps volunteer, Rev. Elivo has ministered to the area’s farmworkers for several years and is pastor of Alton Free Methodist Church.

The new food pantry also needed to be open enough hours each week to make it conveniently accessible, he said. It can be tough for people to get the assistance they need from a pantry that’s only open for a few hours once a week.

“We’ve gotten some of those referrals where people can’t wait a few days. A lot of times they need (the assistance) right now,” he noted.

Thus, Catholic Charities of Wayne County’s new food pantry is open from 9 a.m. until 2 p.m. every Tuesday, Wednesday and Friday.

Although the agency hopes its new pantry will fill in some gaps in service, staffers still refer clients to other food pantries as well, Deacon Sullivan said. The agency provides clients with information about the resources available to them, and lets them choose which resources will best meet their needs.

In the month of August alone, the food pantry provided food for more than 100 individuals, and approximately half of these were children, Rev. Elivo said. Spanish-speaking individuals also make up a large percentage of the people served in August, with more than 55 percent coming from a Hispanic background, he said. Forty of those are farmworkers, he added.

“We’re especially busy now because many of them (farmworkers) have just arrived for the fall harvest, and when they get here they don’t have anything until they get their first paycheck,” Deacon Sullivan said.

“In this time of the year they come in without food, without clothing,” Rev. Elivo added.

The new food pantry gets its food from Foodlink and typically provides a three- to five-day supply of food for each member of the household, Deacon Sullivan said. The pantry, however, provides more than just food for its clients, Rev. Elivo noted.

“We are not only giving food to them. We are trying to help them in different ways. When people need food, generally another thing is not going good. It’s like a chain,” he said.

The food pantry needs volunteers who can interview clients to find out what other problems they’re dealing with so they can be referred to other resources, Deacon Sullivan said. The pantry also needs volunteers to help distribute food and stock the shelves, he added.

EDITOR’S NOTE: For more information about Catholic Charities of Wayne County’s food pantry, contact the agency at 315-331-4867 or visit its Web site at www.ccwayne.org.