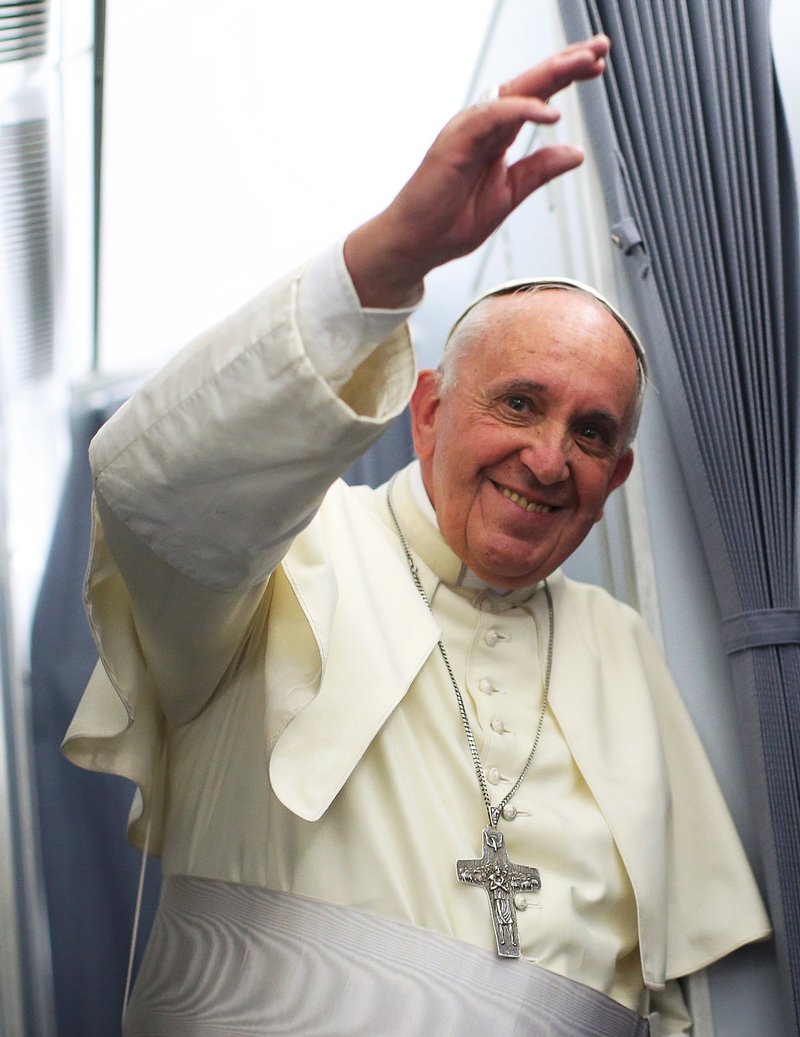 Pope Francis smiles on board papal plane during his return to Rome from Asuncion, Paraguay, July 12. New Gallup poll shows pope's favorability has dropped among Americans.

WASHINGTON (CNS) — Is the honeymoon with Pope Francis over for Americans?

A new Gallup poll shows that the favorability rating for the pontiff among U.S. respondents is now about 59 percent, down from 76 percent in early 2014 and close to the 58 percent rating Americans gave him when he was elected pope in March 2013.

Sixteen percent of respondents in a poll conducted July 8-12 gave him an unfavorable rating, compared to 9 percent in 2014. Twenty-five percent now say they have no opinion or have never heard of him.

Among Catholic respondents overall, 71 percent said they have a positive view of the pope, down from 89 percent last year.

The percentage of Americans who identified themselves as conservative and gave him a favorable rating dropped 27 percent — 45 percent now, compared to 72 percent last year. The number of moderates and liberals rating him favorably declined 8 percent and 14 percent, respectively.

Gallup attributed the decline among conservatives to their disagreement with Pope Francis’ strong words in his environment encyclical that human activity is a major cause of climate change as well as his focus on income inequality.

In "Laudato Si’," released in June, the pope said there is a moral obligation to preserve the planet, and climate change is a serious issue.

"If you look at trends, there has been a decline in the general attitudes toward institutions of authority of all kinds, especially religion," said Bill Dinges, a professor of religion and culture at The Catholic University of America in Washington.

"We know by way of Gallup polls, and others, that the nation as a whole is becoming less religious, just as it’s becoming less Christian. I am not surprised that conservatives disagree, but that liberals do," he told Catholic News Service in comments about the survey results, released July 22.

Liberals say they are disappointed that the pope has not backed women’s ordination or married priests and has reiterated church teaching on traditional marriage, as recently as his trip to the Philippines in January.

The first Gallup poll on the pope’s favorability among Americans was conducted April 11-14, 2013. Fifty-eighty percent of respondents said they had a favorable opinion of him; 10 percent viewed him unfavorably; and 31 percent stated that they had either never heard of him or had no opinion about him.

He earned a lot of praise from U.S. media in his early days as pope for his focus on helping the poor, interfaith relations and what many thought would be a change in doctrine on same-sex marriage and the ordination of women.

In 2013, Time magazine named him "Person of the Year" and praised what the article described as "progressiveness."

"In a matter of months, Francis has elevated the healing mission of the church — the church as servant and comforter of hurting people in an often harsh world — above the doctrinal police work so important to his recent predecessors. John Paul II and Benedict XVI were professors of theology. Francis is a former janitor, nightclub bouncer, chemical technician and literature teacher," the article said.

The most recent Gallup poll showed that the pope’s favorability rating is higher than that for Pope Benedict XVI. According to Gallup, its last poll conducted about the German-born pope — in March 2010 — showed he had a 40 percent favorable rating. He retired in 2013.

Gallup also said St. John Paul had an average favorability rating of 72 percent throughout his papacy, which lasted from 1978 to 2005.

The July poll on Pope Francis was conducted with telephone interviews of 1,009 adults ages 18 and older, selected at random from all 50 states and the District of Columbia. The margin of error was plus or minus 4 percentage points.

Pope Francis’ popularity among Americans could spike again once he makes his first visit to the U.S. in September, visiting New York, Philadelphia and Washington, where he will be the first pope to address a joint meeting of Congress.

Dinges told CNS he believes this will be the case, especially because he will be in the public eye and will be receiving a lot of media coverage.

"The media maketh and the media breaketh," he joked.

The popularity of St. John Paul among Americans rose during his 1993 and 1999 U.S. trips to the U.S., and the same was true for that Pope Benedict during his 2008 trip.

Another recent national poll of likely 2016 voters showed that 56 percent of them agree with the pope’s environmental encyclical, his emphasis on the need to help the poor and his criticisms of today’s "throwaway culture" and consumerism. Lake Research Partners conducted the survey among religiously affiliated individuals on behalf of a coalition of labor unions and faith-based organizations.